Orphaned son who helped reunite others finds his own lost family 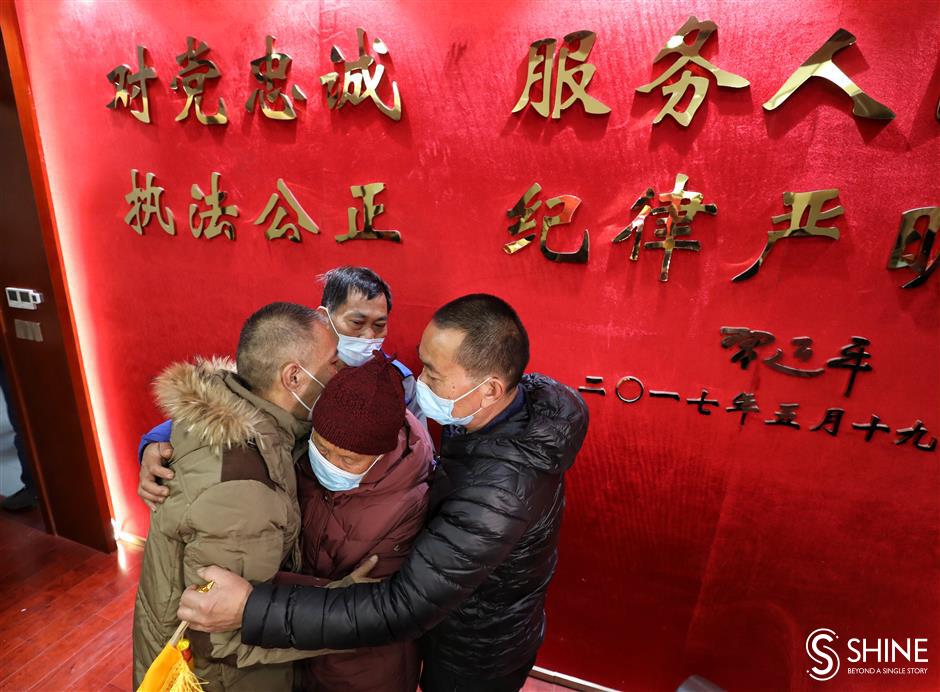 Wang Jinhu, a 59-year-old resident of Luoyang city in central China's Henan Province, visited Shanghai last June to reunite one of his fellow residents with a lost family connection in Jiading District.

But the visit was bittersweet because he returned home filled with deeper sorrow in his heart.

Wang was among the hundreds of children born to families in Jiading around 1960 who were sent away by parents who couldn't afford to feed them due to economic difficulties.

Since 2009, he has been leading the effort to reunite orphans from this part of China who now live in Luoyang with their original families.

Having helped reunite 16 families over the years, Wang was not able to find his own lost family, but he never lost hope and he has now been vindicated.

With the help of police in Jiading District, Wang finally found his lost family at the end of last month and was reunited with his mother and siblings on Thursday after looking for them for 31 years.

Wang was the third adoptee of his foster parents. His mother was in charge of finding homes for orphans like him at that time, and had adopted two children before him.

"She decided to adopt me as well when she found that I would stop crying whenever she had me in her arms," Wang said.

He learned of his adoption history some decades ago and started to travel to Jiading in 2009 with rough information that indicated he probably was born there.

In the past decade, police nationwide have gradually stepped up their efforts to reunite people with their lost families. Wang left his blood sample for the fourth time with police in Jiading District in June last year.

"I believe that if it's our destiny to reunite with each other, it will happen sooner or later," he said.

This time, Wang's blood sample was matched against records not only in Shanghai but also in neighboring Jiangsu and Zhejiang provinces.

Jiading police got the information on December 23 that a man who lives in Kunshan city, Jiangsu, was probably a relative of Wang's. This man then told the police that his family lived in the Huating area of Jiading.

Police officers at Huating Police Station and local volunteers who help people reunite with their lost families got into contact with the family immediately.

The eldest woman in the family, surnamed Qin, provided her blood sample to police and it was confirmed on December 30 that she was Wang's biological mother.

There was a lot of emotion when Wang finally met his mother on Thursday. Since she speaks only the local dialect, it was a bit hard for them to communicate, but Wang has learned to call his mother "Mom" in the dialect.

Wang said he has received a lot of congratulations from the people he has helped and those who are still looking for their lost families, and said he will continue to offer help to them.

"I want to tell those parents who sent their children away out of economic difficulties in those times that they need not have any concern about meeting them again," he said.

"Such children totally understand that it was the hardest decision one could ever make in life, and exactly for that reason they yearn to find their lost parents," he said.