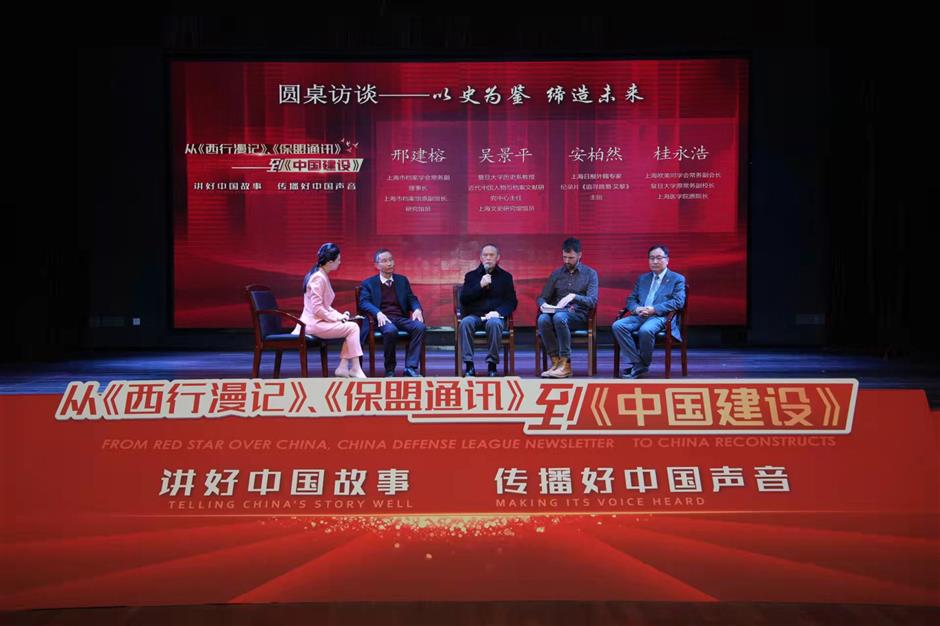 Guest speakers at a roundtable held during an event held on Wednesday to mark the Chinese lunar calendar birthday of the late Soong Ching Ling.

To Gui Yonghao, vice president of the Shanghai Overseas Returned Scholars Association and a pediatric doctor specializing in children's heart disease, the ground-breaking 1972 visit of then US president Richard Nixon to China was a life changer.

Gui, 14 years old at the time, led a group of children at the China Welfare Institute Children's Palace in Shanghai to receive Nixon's wife, his private doctor and other staff during the historic visit.

Fifty years on, Gui still remembers how he and his fellow teens prepared for the visit by learning about the US from rare publications about the country in Chinese available at the time, and how Pat Nixon, the president's wife, was moved to tears when the children's choir performed "Turkey in the Straw," an American folk song that was said to be her emotional favorite.

"That was when I first took up my role in the people-to-people diplomacy between countries and it would last a lifetime," said Gui, who studied in the US and was president of Fudan University's Shanghai Medical College and deputy vice president of the university.

Gui shared the story at an event held on Wednesday on the occasion of the Chinese lunar calendar birthday of the late Soong Ching Ling, honorary president of the People's Republic of China and wife of Sun Yat-sen. She was also the founder of the China Welfare Institute, formerly Chinese Defense League, an international humanitarian organization founded in Hong Kong in 1938 as a rescue effort for the Chinese people during the Anti-Japanese War.

The event focused on the contribution of Soong to make China's voice heard in the world both before and after the establishment of the People's Republic of China in 1949.

Soong was a key facilitator for American journalist Edgar Snow to interview top leaders of the Communist Party of China in 1936. Snow published the well-known "Red Star Over China" the next year in London, which opened the eyes of many in the West to the Party and its cause around that time.

She also initiated the "Chinese Defense League Newsletter," a key English publication during the Anti-Japanese War that reported on the warfare in China to the world, and the "China Reconstructs," a post-war periodical in English that reported on China's developments and which was later renamed "China Today."

Soong's efforts to bring China to the world have drawn praise, with many believing they shaped the country's modern history.

In his speech to the gathering on Wednesday, Lin Songtian, president of the Chinese People's Association for Friendship with Foreign Countries, said Soong's contribution to China's national rejuvenation, world peace and progress of humankind should always be remembered.

"Internationalism is still relevant today, and we should never stop efforts to join the hearts of different peoples," Lin insisted.

Zhang Xiaomin, vice president of the China Welfare Institute, said the institute takes it as its mission to serve as a bridge between China and the rest of the world and aims to carry forward the best practices of the past.

"Soong Ching Ling would like to see that the wishes for friendship from the Chinese people travel to further corners of the world and unite all nations," he said.