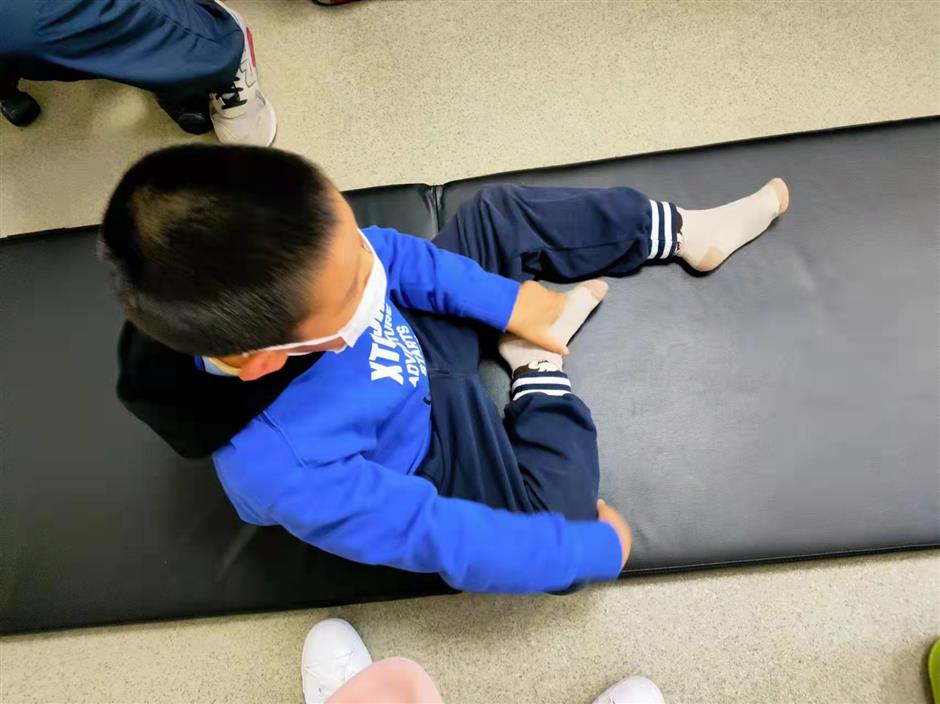 A boy with SMA does rehabilitation exercises.

It is the best New Year's gift for spinal muscular atrophy patients, and a ray of hope for their families.

SMA, is a rare neuro-muscular disease which seriously impacts life quality. There are nearly 30,000 SMA patients in China, with about 1,500 new cases each year.

Children with the disease usually die between 2 and 10 years of age. Even children with relatively mild cases can experience problems with their bones, muscles, lungs and heart as they grow.

Almost all patients with SMA have curved spines and the condition typically worsens after patients enter puberty. The curved spine can press the chest and many people die due to respiratory complications.

Chinese doctors only began paying serious attention to the disease in 2018. Because of limited medical knowledge in more remote areas of the country, some children were treated with useless therapies that had serious side effects.

Nusinersen sodium injection is a medication used to treat the disease. Approved in the United States in 2016 and introduced into China in 2019, it was also the first modified therapeutic drug for treating SMA disease.

It can effectively curb the development of the disease, and improve patients' physical and breathing functions.

But its price was sky-high and not affordable for many families as it cost 700,000 yuan (US$109,760) per injection. However, in December, it was included in China's medical insurance category of 2021, bringing hope to SMA patients' families.

On January 1, more than 20 patients in 11 provinces and municipalities such as Beijing, Shanghai, Zhejiang, Guangdong, Fujian and Sichuan took the shot under the new policy. 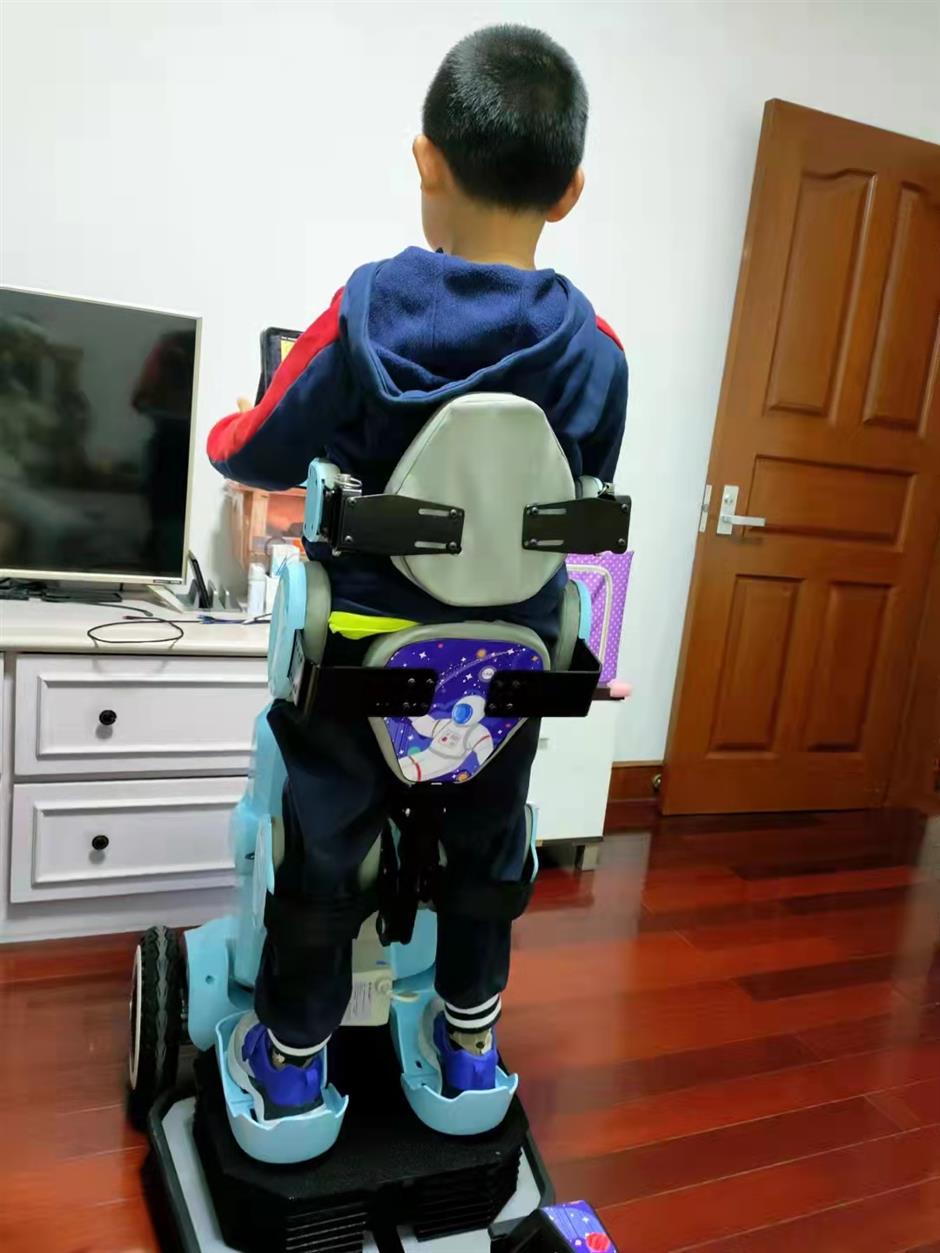 A boy with SMA undergoes rehabilitation exercises at home.

Two Shanghai children were among them.

There was a significant effect after the four shots, but the family could not afford further treatment.

"We were in darkness in the past, but now, there is light," said the mother. "Our confidence in the future is ignited and I think my son can receive timely and effective treatment now.

"In the past, we lived in worries and were helpless all the time as the treatment would stop any time due to financial difficulty, and I felt sorry for my son often."

Xiao Songguo, 7, did not have any shots previously due to financial difficulty. He could not stand or walk without assistance and received rehabilitation at home to slow movement function degradation.

He had his first shot recently.

"We were very surprised, excited, and more importantly, moved when we learnt about the decrease in the price in November," his mother told Shanghai Daily. "The drug price was sky-high in the past.

"It is a surprising delight and I feel like I am dreaming."

Chen Wanjin, a doctor of the First Affiliated Hospital of Fujian Medical University, added: "In the past, we often received SMA patients who had to give up treatment or halted treatment due to the financial burden from treatment fees. This time, the situation is expected to be reversed".

Xing Huanping is director of the Beijing-based Meier Advocacy and Support Center for Spinal Muscular Atrophy, the first non-profit organization of its kind in China.

"On the first day of the New Year, some SMA patients received treatment under the new policy," Xing said. "We are grateful for the efforts from the government, doctors, companies and various circles of the society behind it. It is the best New Year gift to Chinese SMA patients and their families!"

At 7am, January 1, Li Jiashu, 5, received a shot of nusinersen sodium at the Maternity and Child Health Care of Zaozhuang, Shandong Province.

He was the first beneficiary of the policy in the nation.

When the boy was under medical observation, his mother Li Xiuhua waited outside the ward.

"I am very excited and happy," said Li. "It is the child's first shot and the whole process is smooth."

"I hope my boy will recover and fulfill his long-term dream – going to school."

For Li Jiashu, it was a long wait lasting nearly four years.

When he was four months old, parents found he had trouble in walking.

"He could only walk several steps when he was nine months, and he could not crouch down when he was 11 months, like his leg was frozen," the mother recalled.

The boy was diagnosed with SMA.

"I knew there was a drug to treat the disease, but it seemed too far from me. I could by no means reach it."

December 3 is the four-year birthday of the boy.

When Li Weifeng, the father, opened his mobile phone on the day, the news of "sky-high drug listed in medical insurance category" popped up.

Li read it to his wife, who burst into tears.

"It is the best birthday gift for my son, and there is finally a ray of hope," the mother said.

Another patient surnamed Du in Guangzhou, Guangdong Province, has received the shot as well.

His family was deterred by the sky-high price as well.

"The new policy ignited my hope of life," he said. "Many patients and the parents of children patients cried out when they learned the news."

SMA patients need to take six shots in the first year, and three shots from the second year.

The new policy will save several millions of yuan for patients.

It will be implemented in 20-plus provinces and municipalities across the nation gradually beginning this month.

Experts have also called on the promotion of early screening of rare diseases like SMA among new born to detect the disease early for timely treatment.