Top marks for universities and students under lockdown

The Fifth Dormitory Building on East China Normal University's campus in Putuo District was locked down over the weekend.

Yang Xinglong, youth league secretary and mentor of students at the school of data science and engineering at East China Normal University, was ready to enjoy his winter vacation but received an urgent notice on Friday that some of his students needed to undergo two days of lockdown in dorm.

It was the Fifth Dormitory Building on the university's campus in Putuo District that was to be put under a closed-loop management for screening amid the recent wave of COVID-19 cases in Shanghai.

A total of 533 students and dorm management staffers, including 82 students from Yang's school, tested negative in two rounds of nucleic acid tests, and will serve health observation over the next 12 days. 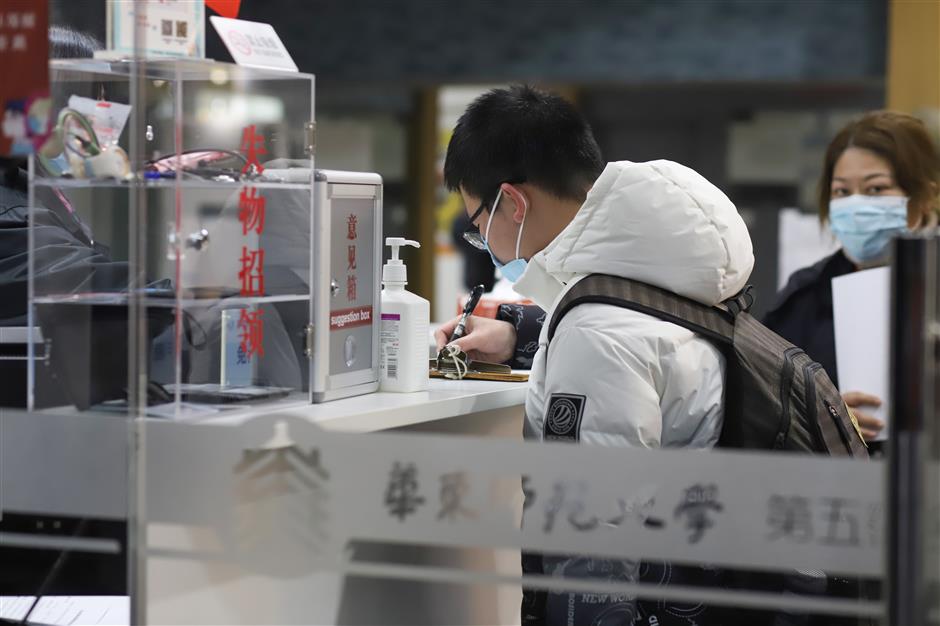 A student returns to the campus to serve the closed-loop management.

"Many places are undergoing screenings but I didn't expect it would come to us so suddenly," he said.

"Some students had left school for home and some even had arrived in their hometowns. We had to call them one by one to ask those in Shanghai to return and those out of town to serve the 2 days of lockdown and 12 days of health observation at home. We also called the community workers of the out-of-town students to strictly carry out closed-loop management for them." 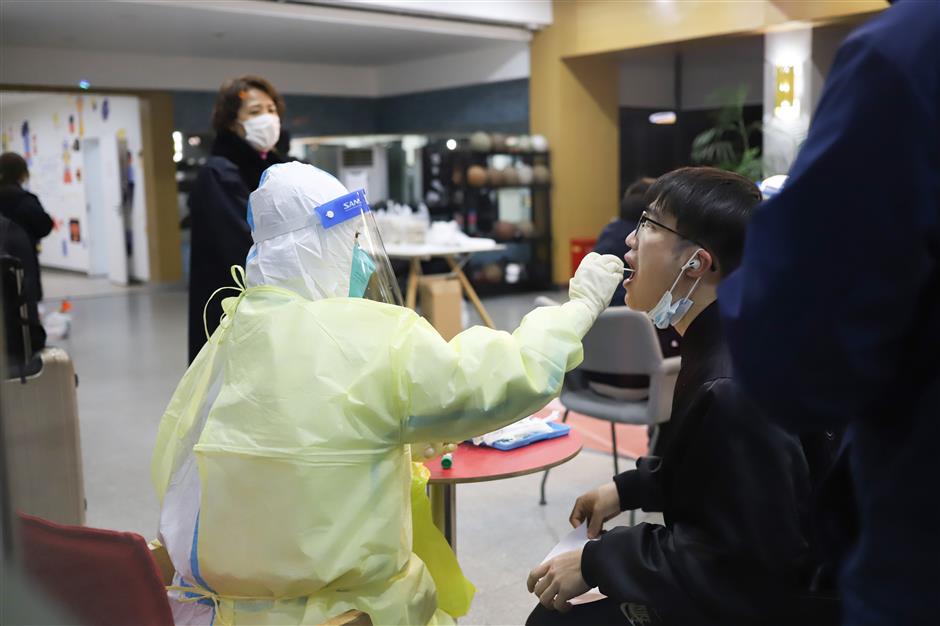 It was not an easy job. As it's vacation, some students had special arrangements and didn't answer the calls immediately.

"I can't remember how many calls I made on Friday and Saturday," Yang said. "For one student who was learning driving, I made nine calls to eventually be able to talk to him.

"And some students didn't understand why they had to return to the campus for the lockdown, so we had to explain to them patiently the requirements of pandemic control."

Yang said it was inevitable that students would get into some sort of panic, so they established a group on WeChat with teachers and school leaders to comfort them and cheer them up. 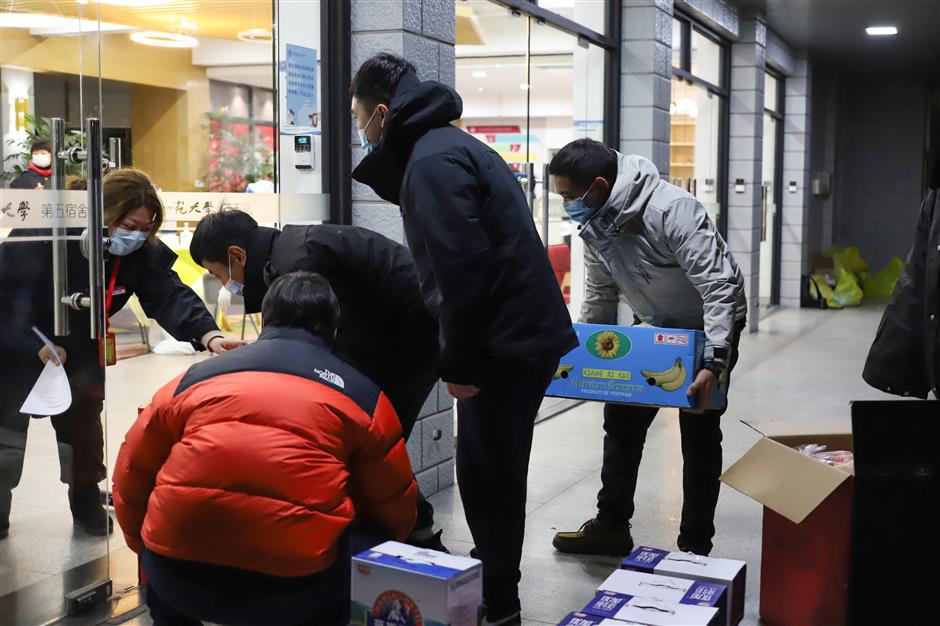 Yang Xinglong (right), youth league secretary and mentor of students at the school of data science and engineering at East China Normal University, delivers fruit, milk and other food into the dorm under lockdown with other volunteers.

"Some students' vacation plans were interrupted, which made them worried and upset," Yang said.

"For example, some students planned to go back to their hometown this weekend, but now they have to apply for refunds for train tickets.

"We established a voluntary team with students who were not locked down to serve their special needs. We also bought some food including fruit and milk for them, since most students were ready to leave for vacation and had no stock in the dorm."

The university's logistics department responded quickly to close the building.

Seven management staffers were in the building and another seven were called back to serve the students.

They were responsible for arranging the nucleic acid tests, serving meals, and preparing rooms for about 40 people who didn't live in the dorm but had visited it during the investigated time period. Another 20 staffers were supporting them from outside. 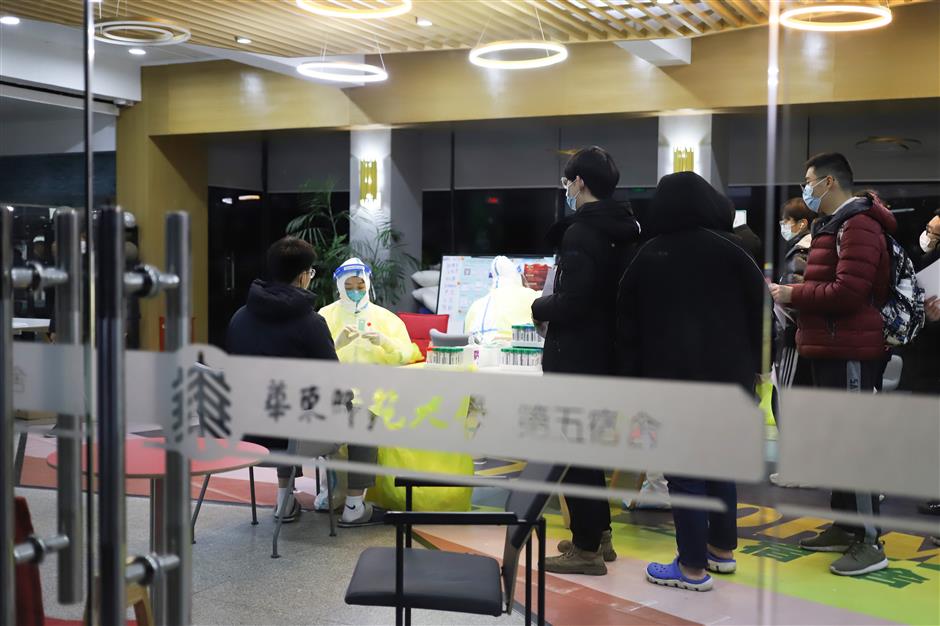 Students were cooperative, according to the university.

Cao Xinlei, a local student who arrived home on Thursday, returned to the campus after receiving the call from his mentor.

Liu Bin, a masters student of computer science, was ready to go home with a negative nucleic acid test report required by his hometown government. But he had to cancel because of the lockdown.

"I told my parents about the change and relaxed soon," he said. "Since I have to stay in Shanghai for the next 12 days, I will spend this period of time on study."

Abdul Sami, an undergraduate of computer science from Xinjiang Uygur Autonomous Region, was busy with writing a graduation thesis. He said the lockdown had little influence on him.

"I usually stay in the dormitory room on weekends," he said. "Since the two-day lockdown began on Friday afternoon and the university arranged meals for us, I just did what I planned to do as usual. My parents called me and told me to stay in Shanghai for the Spring Festival."

Yang said every year the school saw about 30 students remaining on campus during the Chinese New Year and this year the number was expected to increase as it might be difficult to buy new train and flight tickets during the Spring Festival rush.

"We have some routine activities, such as giving out gift packages and solving lantern riddles, but will arrange more this year to make them spend a happy Chinese New Year on campus," said Yang. 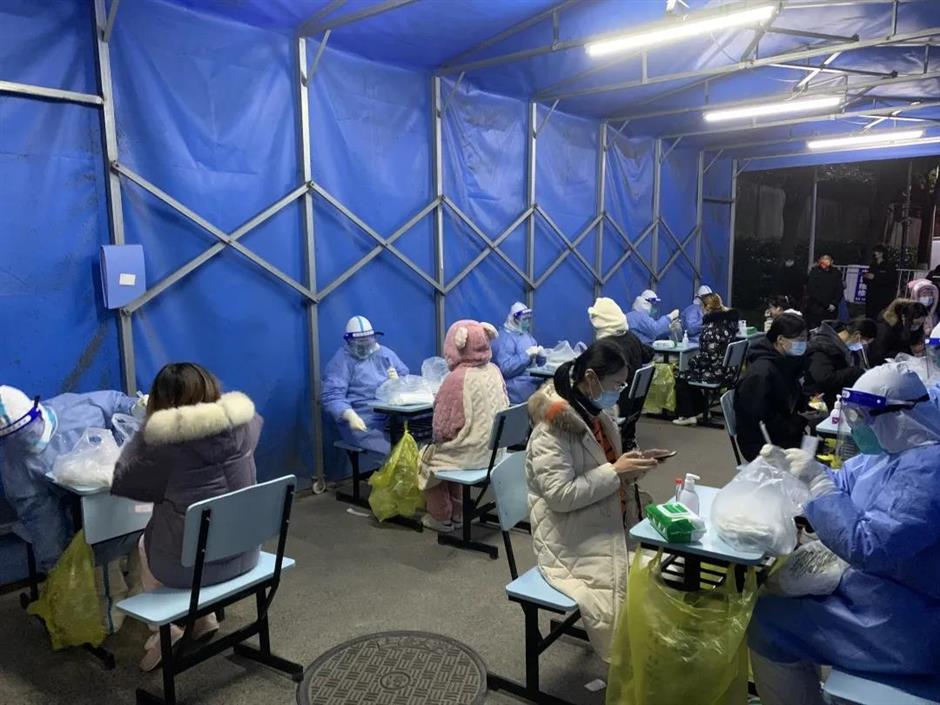 Shanghai University also had one of its buildings on Baoshan Campus locked down over the weekend, while all the faculty and students on Yanchang Campus were required to take nucleic acid tests.

As Friday was the last school day of this semester for the university, many students planned to leave after class but remained to take nucleic acid tests for pandemic screening.

The university made an urgent purchase of more than 2,000 kilograms of vegetables, hundreds of boxes of milk and other food materials to ensure supply for stranded students and teachers.

Sleeping bags, bedclothes and mattresses were distributed into the university, while some teachers and students acted as volunteers to serve those affected by the lockdown.

No positive results have been reported yet. 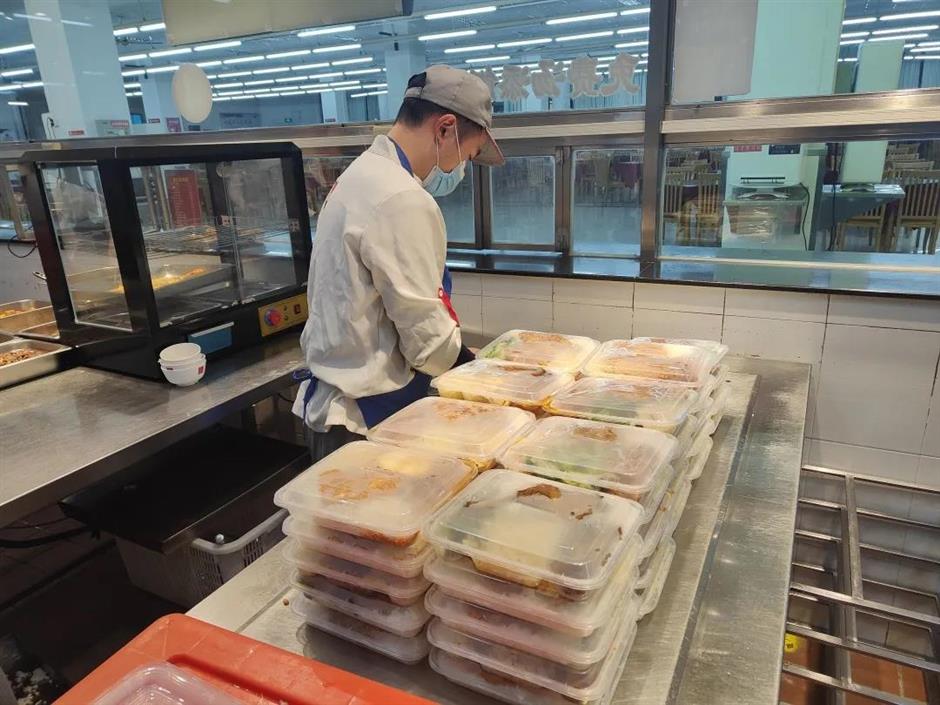