Eyeing the city's thousands of medical personnel who are serving in the front line of COVID-19 control, there are many touching moments and stories. 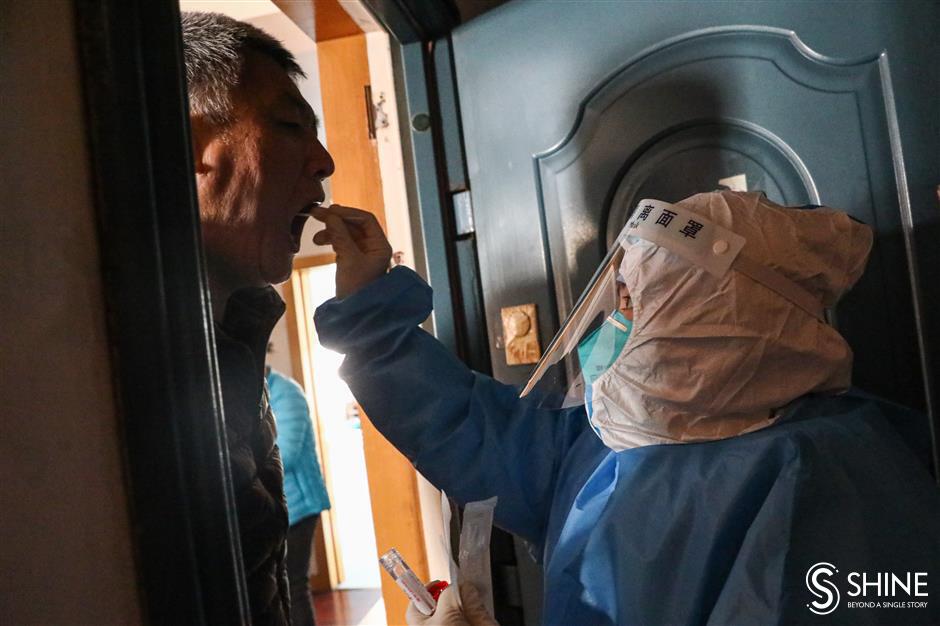 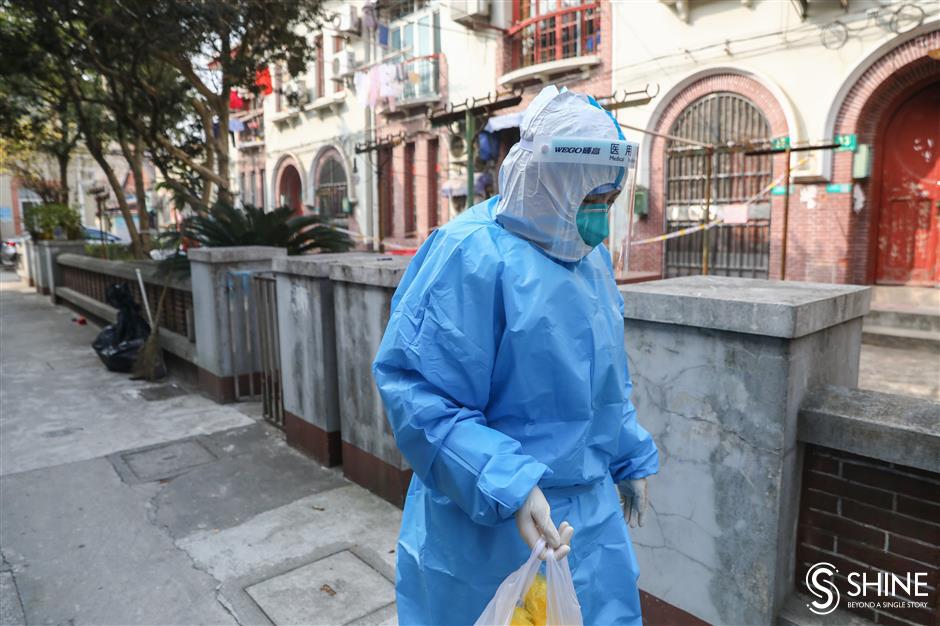 Dr Chen Xiaoyan, goes to check the temperatures who have been put under home quarantine for COVID-19 related screening in Yangpu District on Sunday.

"You are such a brave boy!" said Chen Xiaoyan, who is an acupuncture doctor of Dinghai Community Health Center in Yangpu District.

She now works as a door-to-door sample collection worker, and had just taken a 2-year-old boy's nasal nucleic acid sample.

The boy and his family have been put under quarantine after they were found to have visited the locked-down milk tea shop on Yuyuan Road, which has been designated as a medium-risk area in Shanghai since January 13.

Although she has experienced long days door-to-door temperature checking and sample collection, she still has enough patience.

"Thanks for all of you cooperation," Chen told the boy's families.

Chen also has a boy, who is 9 years old now, but she has no time for him at present.

"I have asked my husband to take care of all the living and study things of my child," Chen told Shanghai Daily. "I have almost no time to take care of him because of the irregular working shifts." 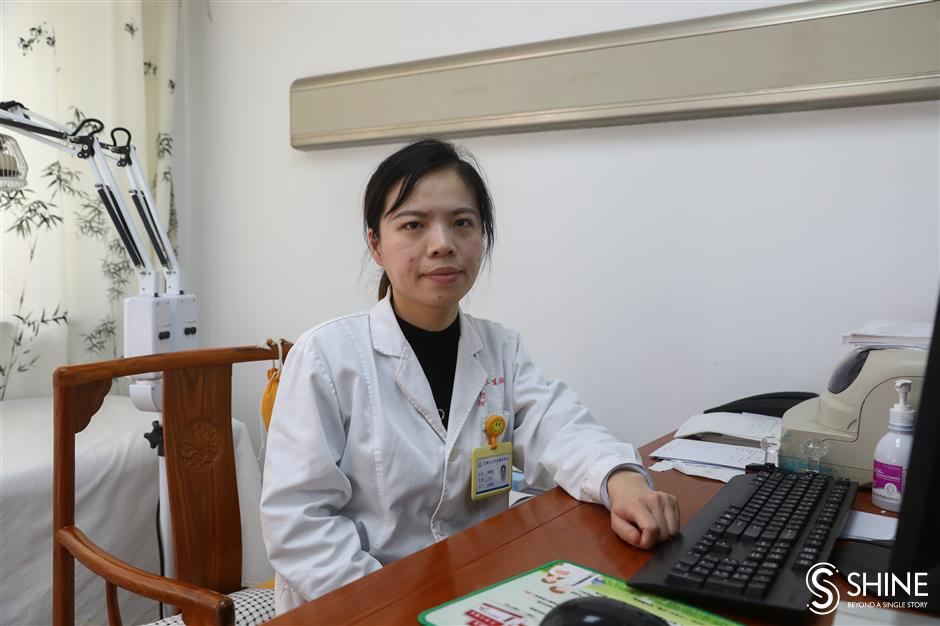 "Everyone in our hospital now holds several posts and is on 24-hour standby for this round of outbreak in Shanghai," said Yu Haiyan, deputy head of the center.

"Many of our staff workers are mothers who don't even have time to take care of their kids."

After finishing each collection, workers need to use hand sanitizer to disinfect, and after collecting the whole samples of a household, they need to change their whole protective suits.

Along with the changing procedures, there are many strict epidemic control steps for each move, which consume a lot of time and energy of those medical workers.

Every time, they have to change the suit as soon as possible because they are "racing with the virus." 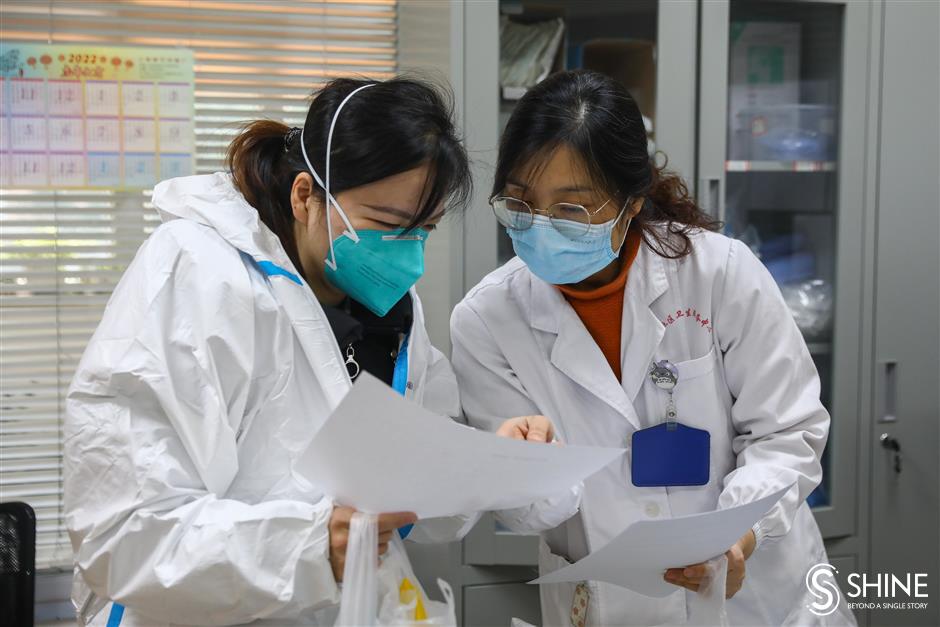 Dr Chen Xiaoyan (left) and her colleague check the information of residents who need to have nucleic acid tests.

Behind the white-suited medical workers, there are also many unrecognized staffers who work day and night for epidemic investigation.

Every information team member for the first-step investigation on related personnel of COVID-19 cases in Yangpu District's disease control and prevention center, worked more than 30 hours in one shift recently during the new round of outbreak. 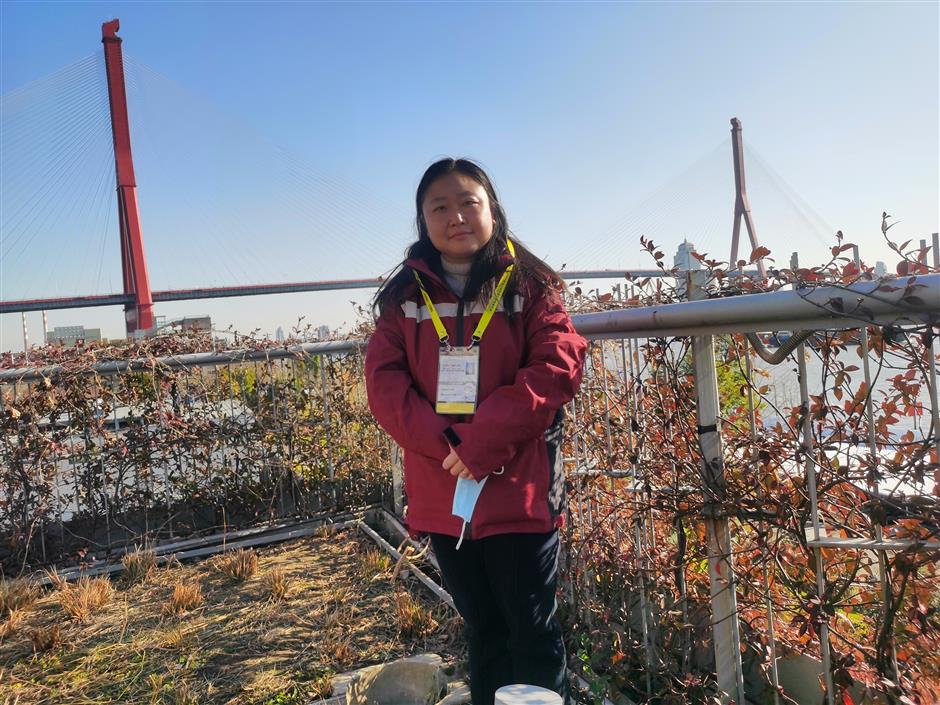 Cao Shen is in charge of the epidemic-investigation (close contact) team of the Yangpu CDC.

The investigation work has always come at midnight and always been hard since the pandemic began.

"I was informed of the new confirmed COVID-19 cases at 12:30am on the day," said Cao Shen, who is in charge of the information team of the Yangpu CDC.

"Because the situation was an emergency, I called a close contact, who's a driver, using my own cellphone. However, it was at midnight and my personal number was displayed. The driver said he thought I was a scammer and told me he was going to call the police."

After 10 minutes, Cao received a call from the local police station.

"I told them my detailed information, even my boss's number to prove that I was not a fraudster," she said.

Every epidemic control staffer is so busy that they even had no time for the toilet or lunch. 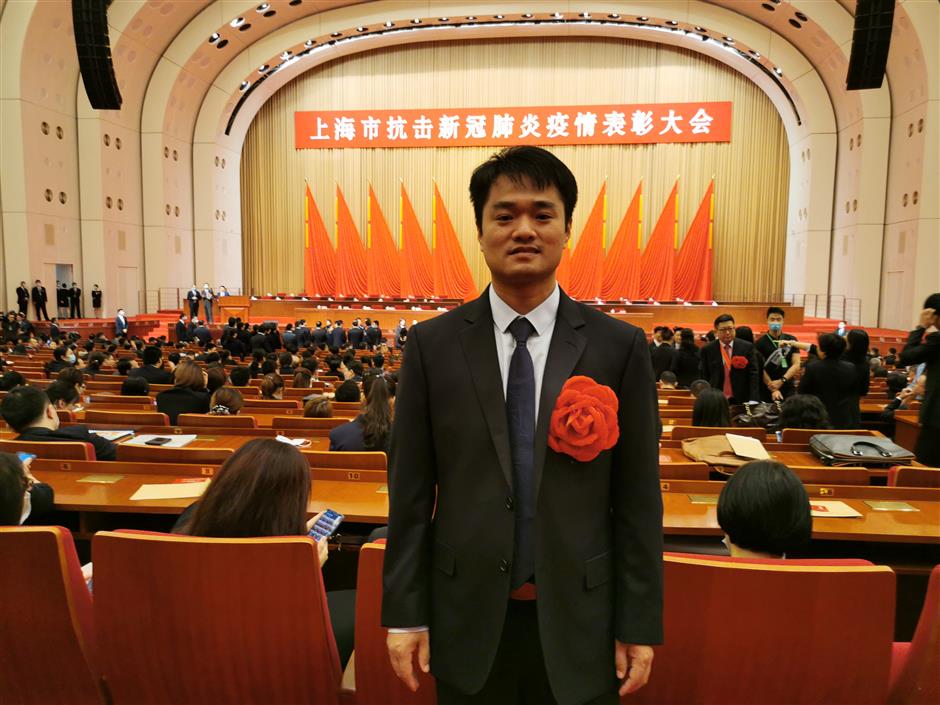 Qiao Peng, team leader of an on-site epidemic investigation team of Yangpu District CDC, is honored by the city for his excellent performance in the anti-COVID-19 campaign.

"We have investigated more than 150 places and traced over 1,000 people during this COVID-19 outbreak," said Qiao Peng, a team leader of an on-spot epidemic investigation team at the Yanpu District CDC.

When it comes to expats who happen to be in the epidemic tracing list, investigation staff try their best to make the process smooth, such as using online-translating platforms, WeChat and translation machines.

"When the investigated people are foreigners, we used translation machines to communicate with them," Qiao told Shanghai Daily. "And foreigners are always very cooperative, some of them may ask their friends or colleagues to do translation."

"To streamline our investigation, our team members use their spare time to practice oral English," he said. 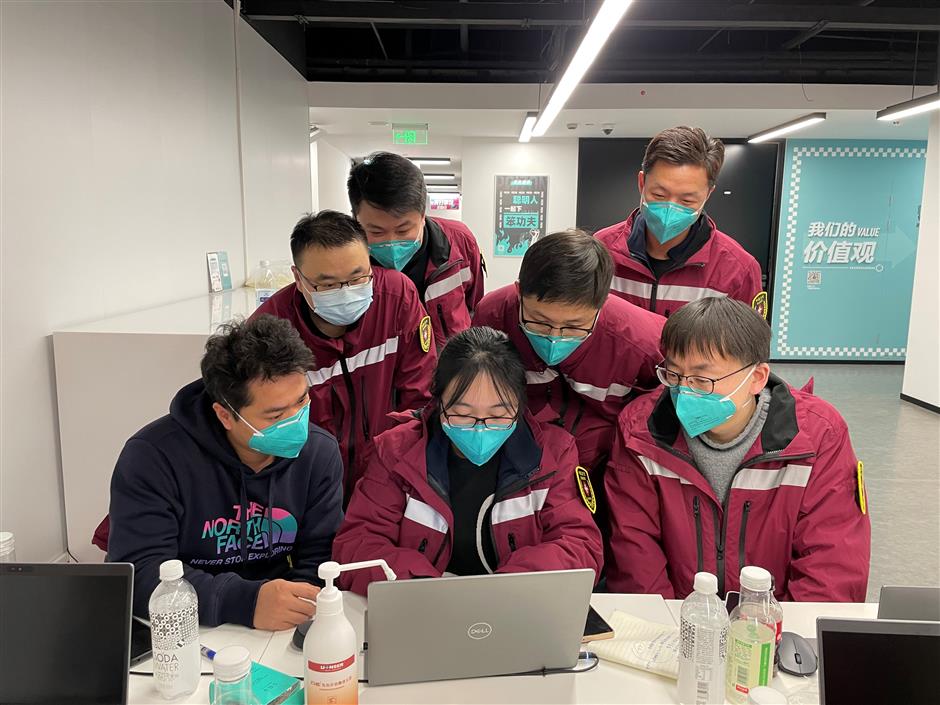 Qiao Peng (left) checks the data of an epidemic investigation with his team members.

Medical workers providing shots are facing a big challenge during the outbreak.

"The daily shots we provided recently are three times as much as the previous days," said Yu Yang, an official of Dinghai Community Health Center.

Today, her work is to give COVID-19 booster vaccinations for minors at the center.

"My usual job is mainly in-hospital infection control," she said. "Now because of the epidemic, I also need to join the injection team." 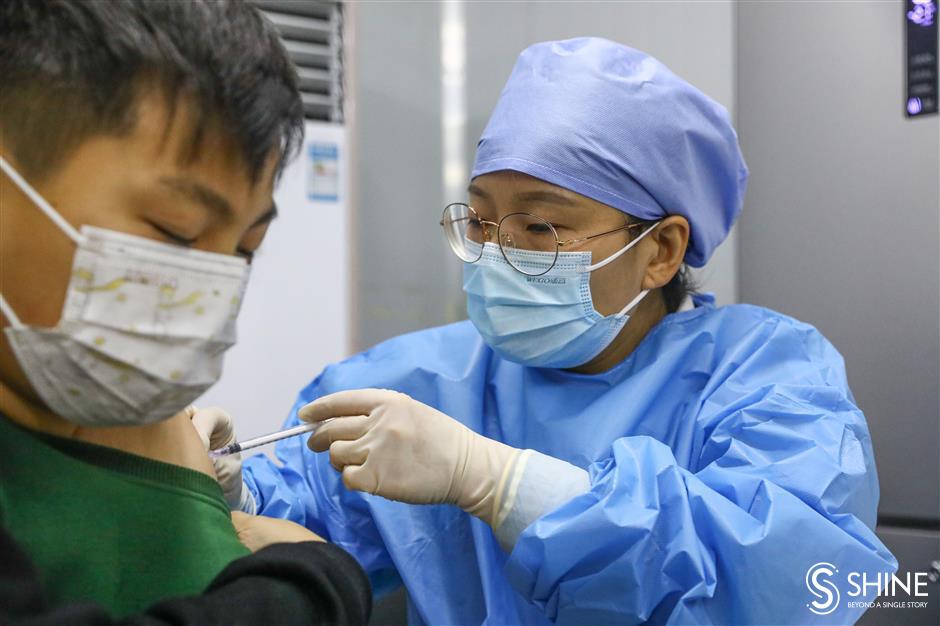 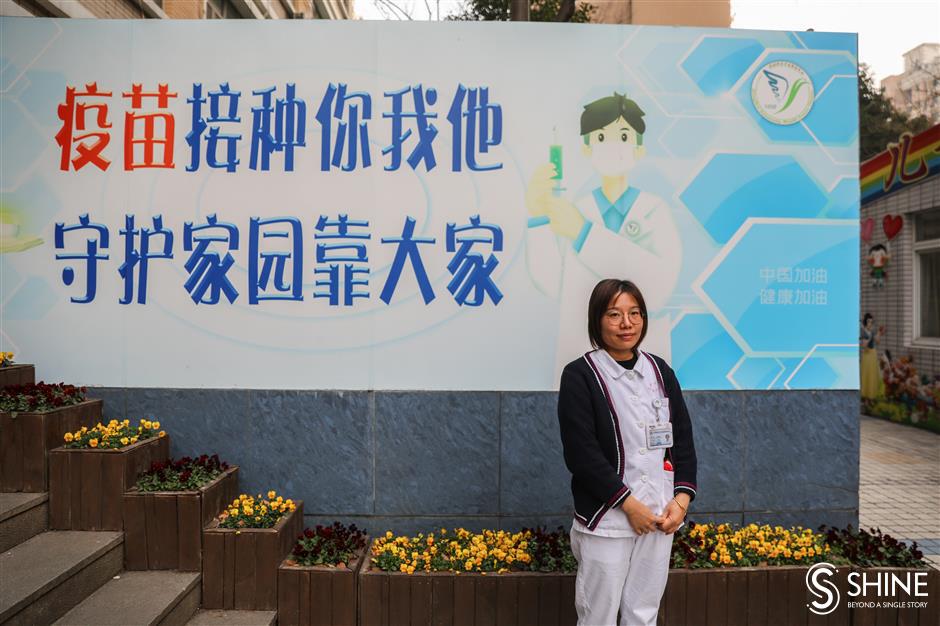 As of January 12, Shanghai had 23.5 million people vaccinated. Among them, 8.7 million had taken the booster shots.

Temporary vaccination sites have been set up near commercial circles, Metro stations and parks, providing "vaccination upon arrival" services.

"Residents are eager to take booster shots," said An Linlin who is in charge of the Yangpu District vaccination site.

"The daily vaccination rate of booster shots has accounted for more than 80 percent of all vaccinations on average," she said.

A nurse at a vaccination site near Jing'an Park said she was so busy that she has no time to go to toilet or have lunch.

"It is convenient to take the vaccination as it is near a wet market," a resident said.

Part of the Caoyang Community Cultural and Art Center in Putuo has been renovated into a temporary vaccination site on weekends.

"Because it's the year end and people are busy, we set up this temporary spot serving employees on weekends," said Qin Lei, an official with Caoyang Residential Community Subdistrict.

"Mobile vaccination vehicles serving the elderly have been arranged as well," she said.