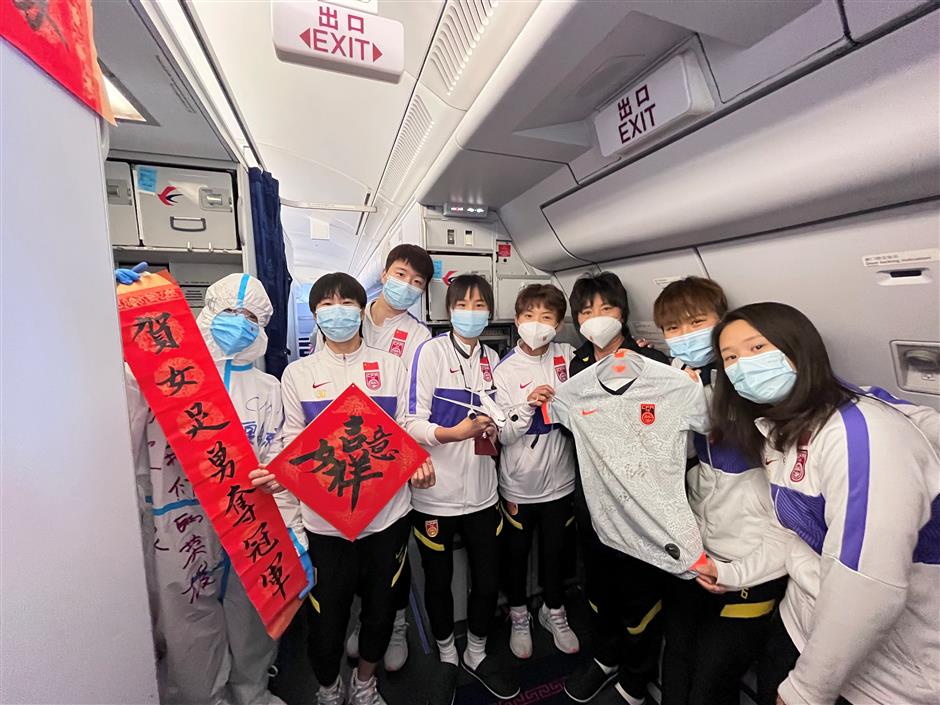 The Chinese women's football team arrived home on Monday night, hailed as heroes after their historic 3-2 win over South Korea to take the Women's Asian Football Cup in Mumbai on Sunday.

The team boarded an Eastern Airlines charter for the flight home from India on Monday, to a warm welcome from the crew – the same crew that flew them out last month.

Sunday's victory was the second for China since its first championship win 16 years ago.

They will stay in Shanghai on Monday night for COVID-19 quarantine and checks. The team will take a bus to Suzhou in neighboring Jiangsu Province on Tuesday for a three-week quarantine.

Chinese media and fans have overwhelmingly praised the team, nicknamed "the Steel Roses," after their dramatic win – in stark contrast to the men's surprise loss to Vietnam in their bid to qualify for the FIFA World Cup.

Four players are graduates from the Caoyang No. 2 High School in Shanghai's Putuo District. 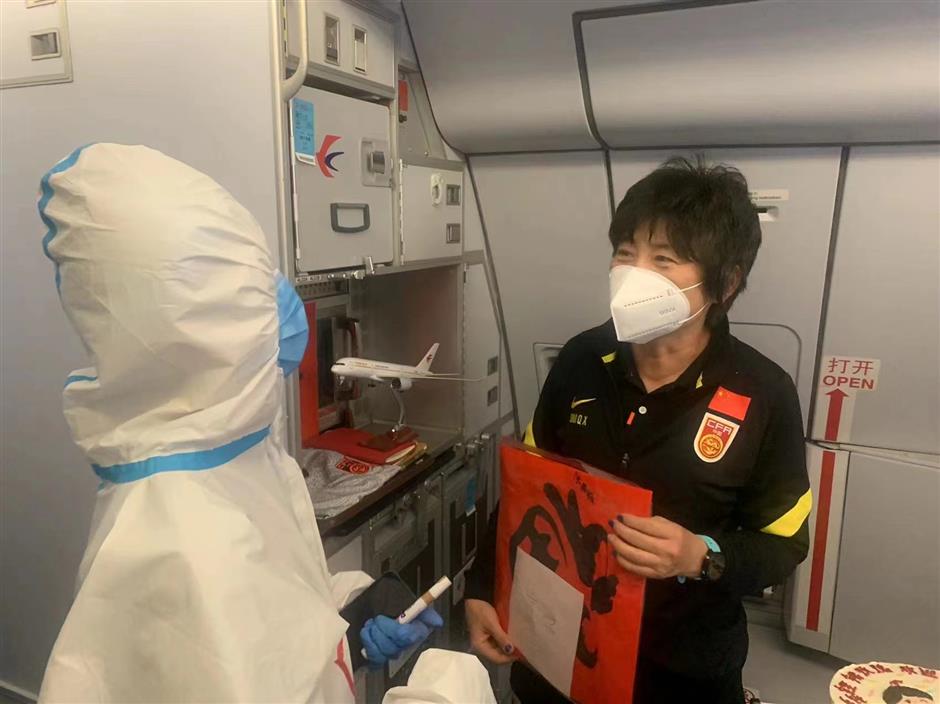 Chinese netizens said the women's team had "earned back the dignity of Chinese football" after the men's loss to Vietnam on Chinese Lunar New Year on February 1.

The nation's Twitter-like social media Weibo and Wechat have been overwhelmed with praise for the dramatic victory of the women's team as well as mockery of the men's side after their defeat.

"We are touched and grateful after seeing the attention and support from so many Chinese netizens," striker Wang Shuang said in the aircraft cabin.

"The triumph is valuable to us and we will keep fighting for the Asian Games in September."

The captain and flight attendants decorated the cabin with couplets and the Chinese character fu (meaning good fortune) to create a Spring Festival ambiance for the players, who missed the traditional festival due to the competition.

After the aircraft landed at the Pudong airport at 7:30pm, quarantine officials presented flowers to each player before conducting nucleic acid testing. The air traffic controller and custom officials also sent greetings to the arriving flight. 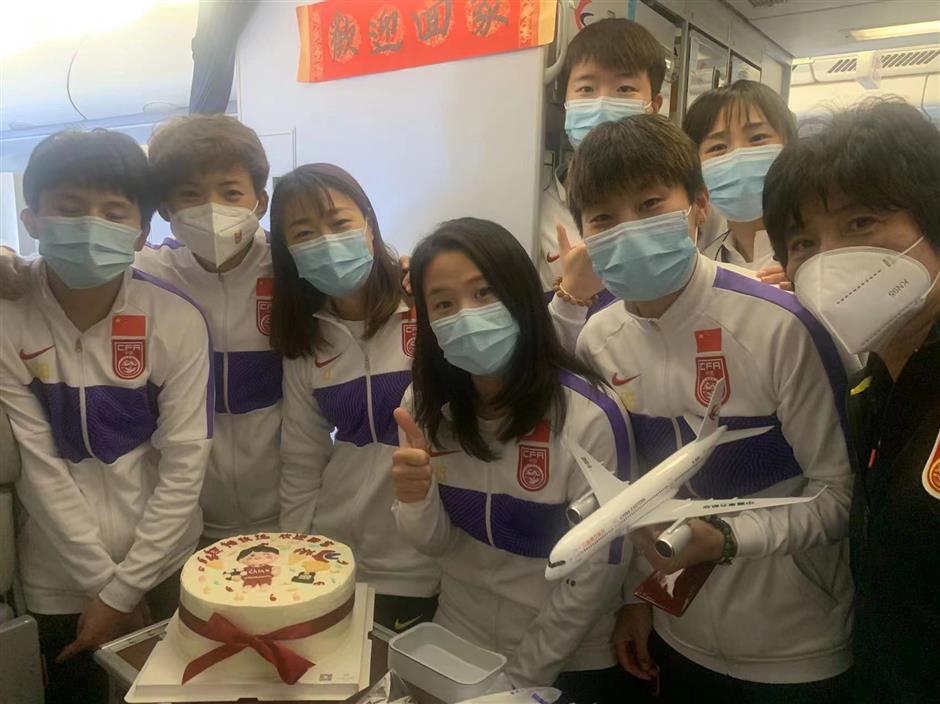 Players pose with a cake and a gift on their homeward flight.

The team set off to Mumbai from Pudong on January 16 for the Asian Cup. China Eastern assigned the same crew to pick them up on Monday.

China's men's football team took another China Eastern charter home last Thursday and are still in quarantine in a Suzhou hotel under arrangements made by the Chinese Football Association.

The women's team won't be in the same hotel with their male counterparts. They will be accommodated at a hotel near the Taihu Lake with a beautiful environment for the players to take a good rest.

Some male players sent greetings to the female team after watching the final.

Team mate Li Lei said: "The Chinese roses are blooming in Asia and we will follow your example." 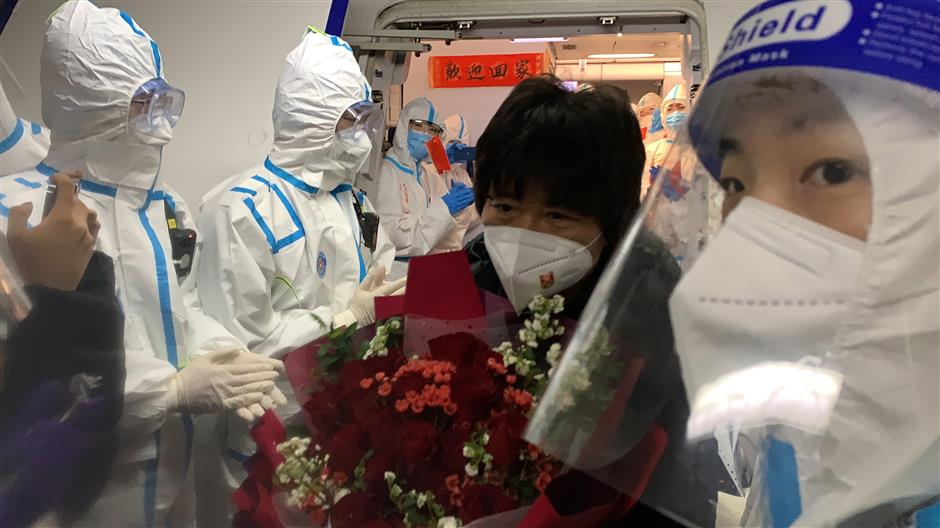 Head coach Shui Qingxia gets off the plane to be greeted by customs officials at the Pudong airport. 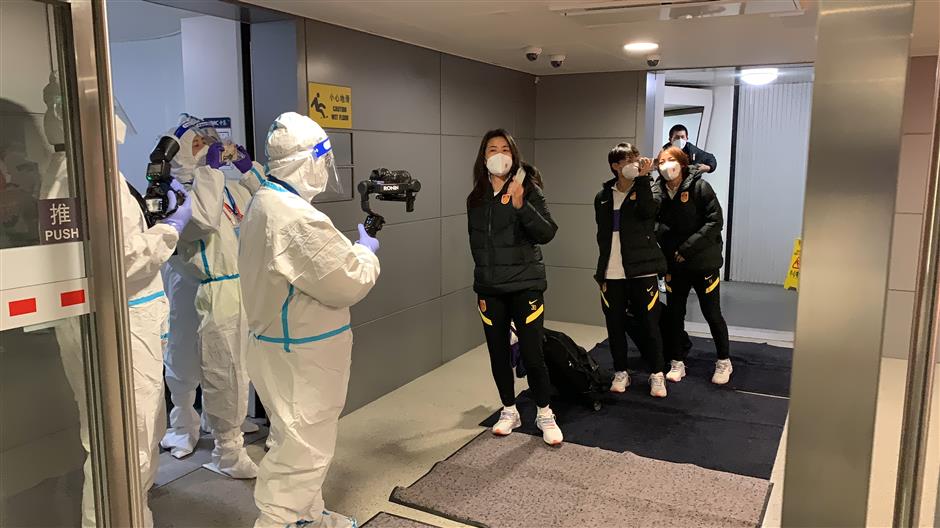 The victorious players disembark from their charter flight to Shanghai.