Back to school activities pick up on Winter Olympics themes 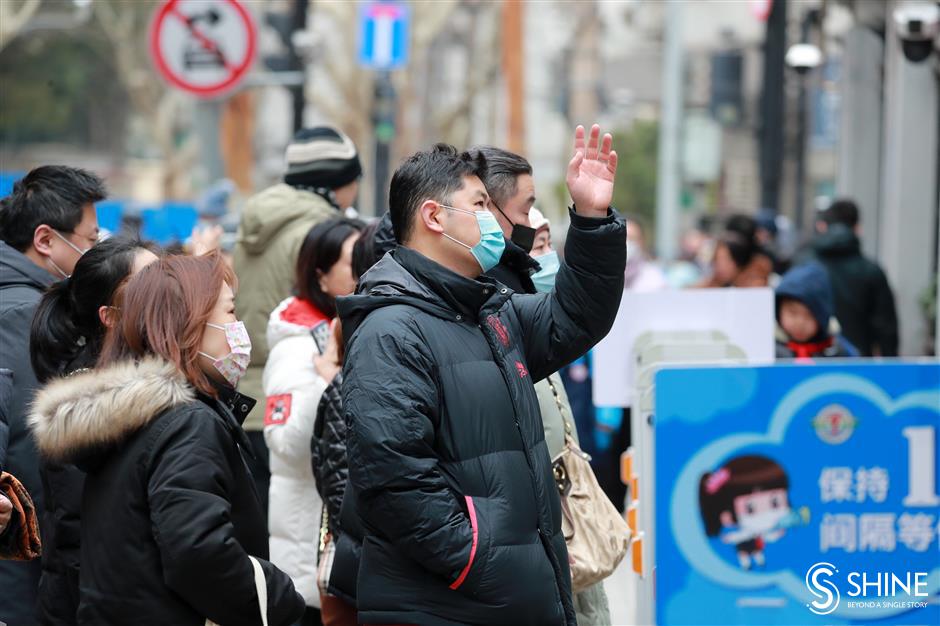 A father waves goodbye to his kid on the first day of the new semester in Huangpu District. 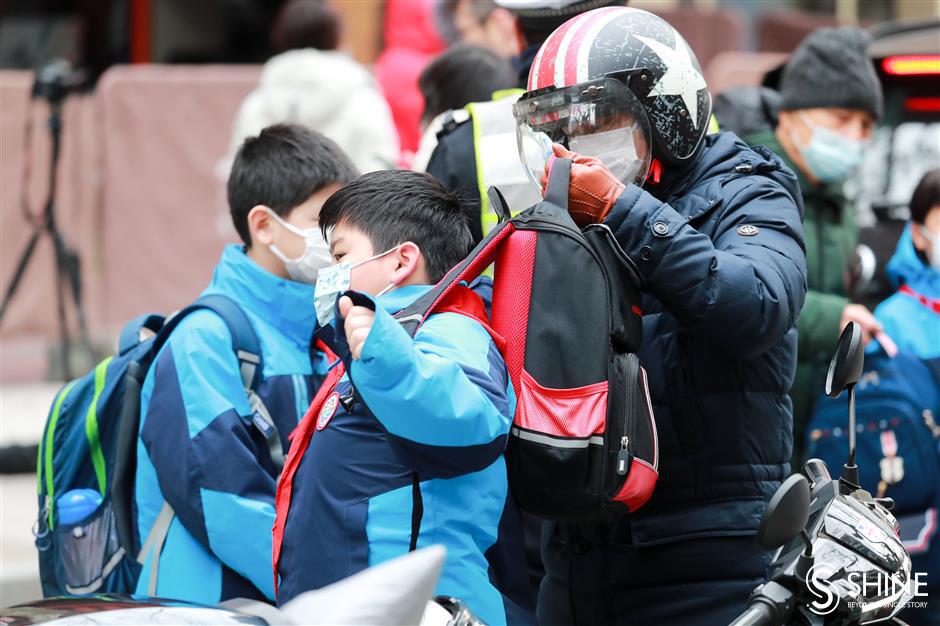 A boy prepares to attend school with his father's help on the first day.

Many Shanghai schools kicked off their new semester on Thursday with activities involving the ongoing Beijing 2022 Winter Olympics.

One of the students, Lu Ya, an 11-year-old girl, shared the story about her mom, Song Dan, who was one of the Olympic torch bearers.

"I'm so proud that my mom was a torch bearer," Lu said. "I saw my mom on TV the day when she passed the torch."

Lu Ya (center), an 11-year-old student whose mother was a torch bearer at the 2022 Winter Olympics, shows the Olympic torch to her fellow schoolmates on Thursday. 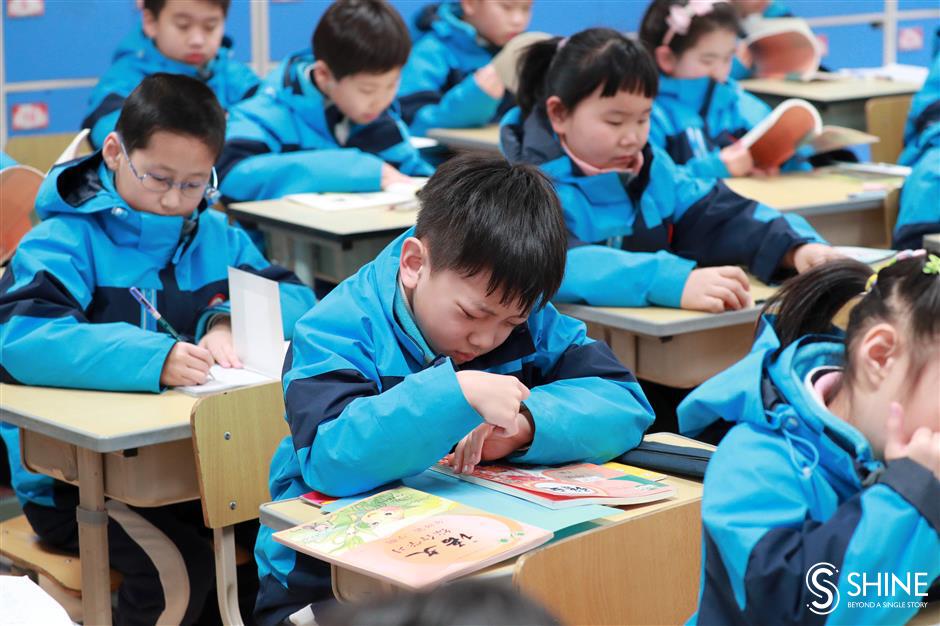 Heads down as students start their first day's study.

Song is a customs officer at Shanghai Pudong International Airport and was honored for her efforts in preventing and fighting against the spread of COVID-19 in 2021.

The torch she used was passed in the school on Thursday, class by class, giving the students a chance to see the Olympic symbol up close.

"I was the 28th bearer in the torch relay for this Winter Games which took place in Summer Palace in Beijing," Song told Shanghai Daily.

The kids were touched by Song's story, some being so inspired they said they will work hard to be a torch bearer in the future.

"Aunt Song's story is very good and inspiring," said Fei Han, a girl in Grade 2. "I want to be an athlete when I grow up."

Also on the first day, students shared how rich their lives were during the holiday by watching the Winter Olympics. The figure skating and skiing competitions turned out to be the most popular events among students.

"I watched the Beijing Winter Olympic Games and I liked the figure skating most," said Jiang Ziyu, a girl in Grade 4. "As I've been learning to dance, I have a deep feeling of how difficult it is for those athletes to skate on the ice."

Gu Ailing and Su Yiming, two outstanding Chinese skiing athletes who won medals in the Games, were hot topics for discussion among the young students.

Many students also actively tried winter sports, such as ice skating, during their holiday, although some of them ended up with a sore bottom as they fell down many times. 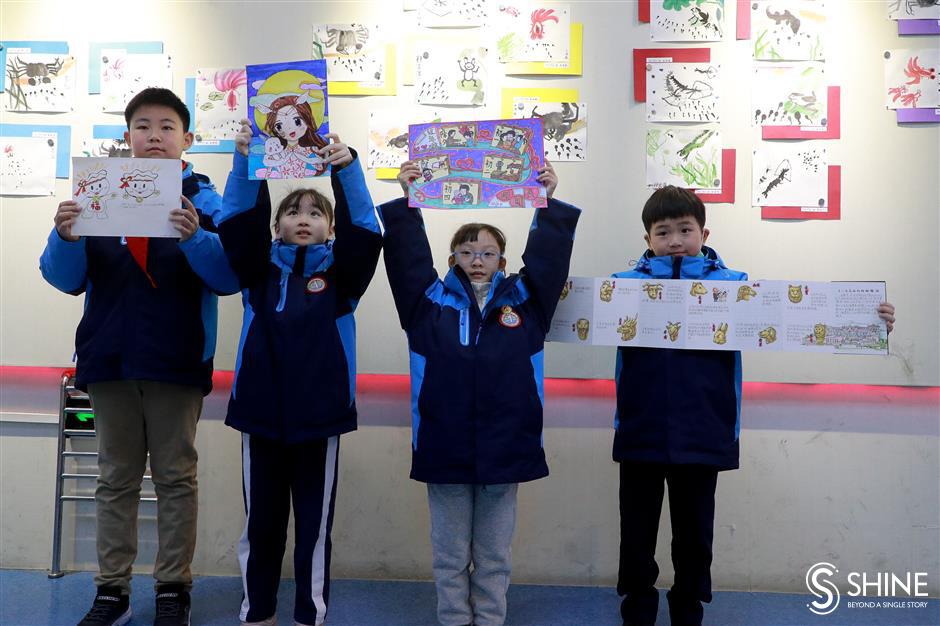 Four students in grades 1, 2 and 5 show their picture drawing homework from the holiday. 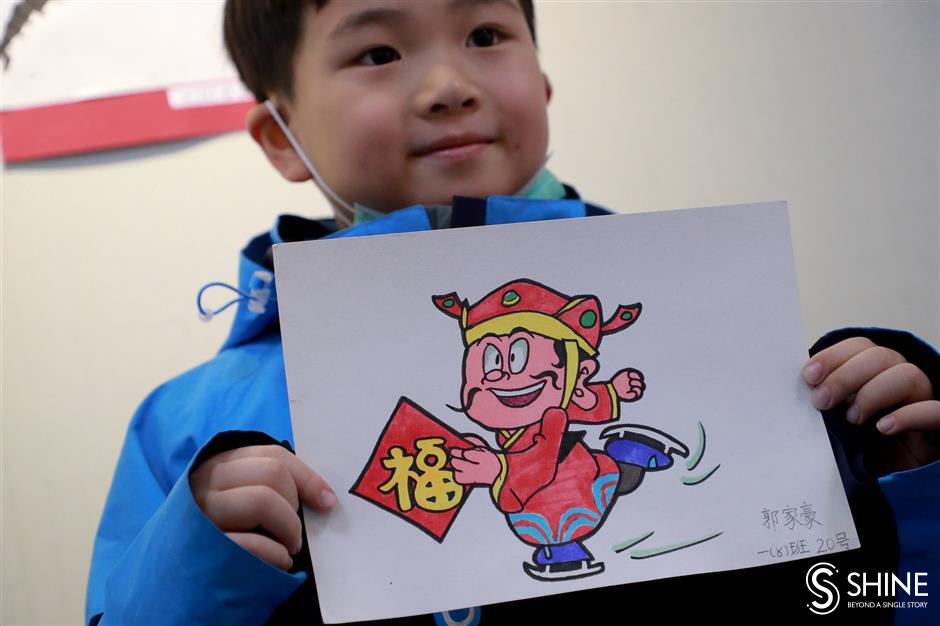 Guo Jiahao in Grade 1 shows his painting which combines the Chinese traditional god of wealth with skating. 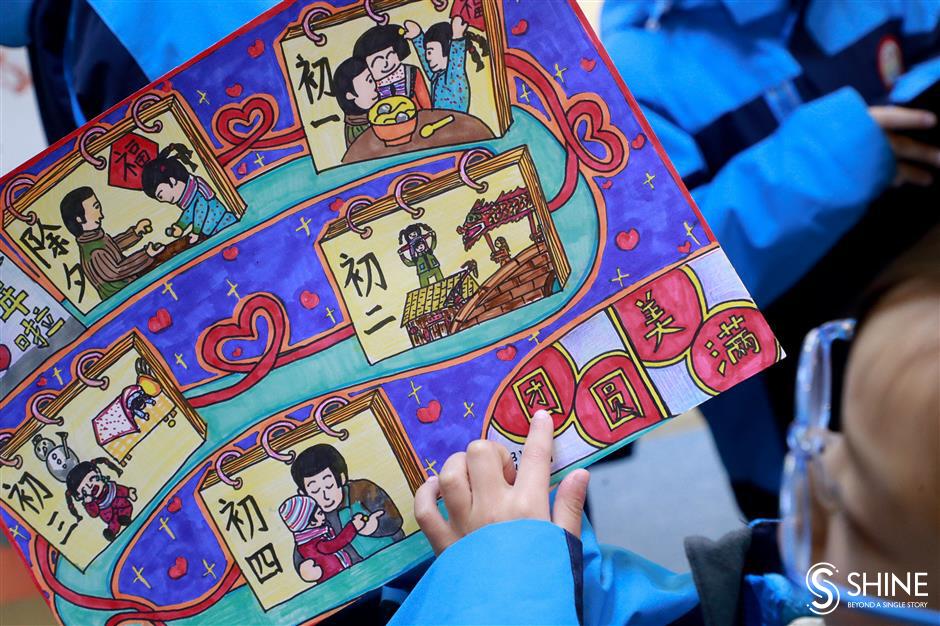 Yang Tingru, a first-grader, shows her painting about a story involving a girl and her dad during Spring Festival.

Students also showed their homework done during the winter vacation, a lot of it related to the Olympic Games.

Also, some students made drawings of the Winter Games and Spring Festival on paper, combining the traditional cultural elements. 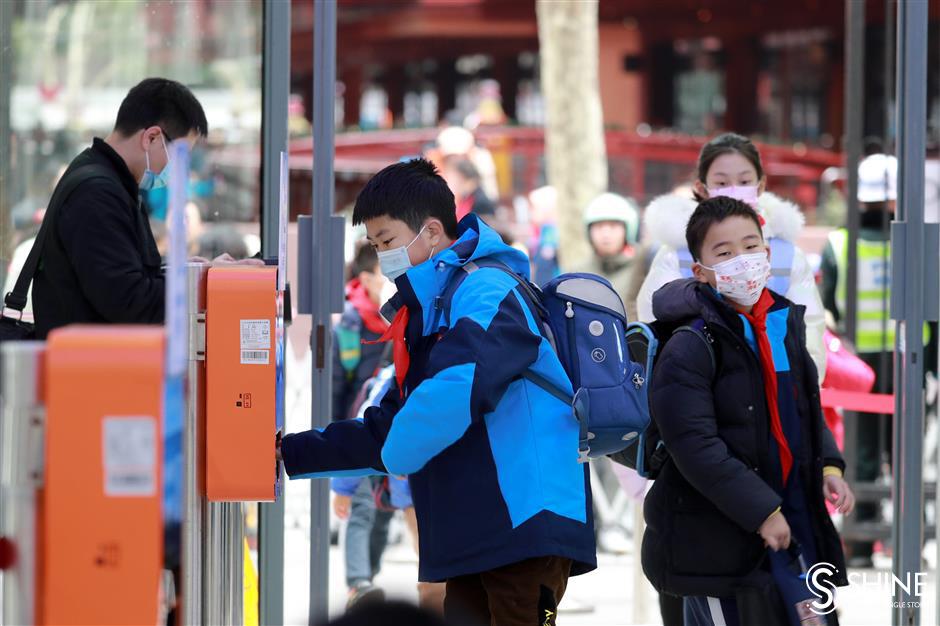 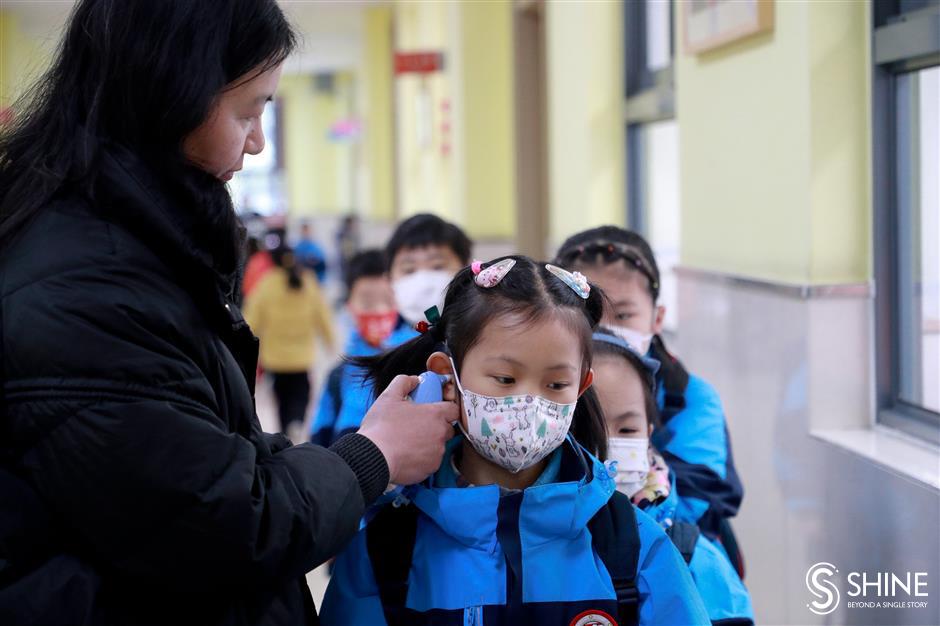 Teacher checks the students' temperature before they enter the classroom.

Some other schools also decorated their campuses with Olympic elements, such as Bing Dwen Dwen and Shuey Rhon Rhon, the Games' mascots.

At Chuncheng Campus of Minhang Experimental Primary School in suburban Minhang District, students were pleasantly surprised to see Bing Dwen Dwen and Shuey Rhon Rhon on the playground and rushed to hug them.

At the school opening ceremony, some students performed a dance with "Together for a Shared Future," a song named after the Games' motto.

Students also showed Games-themed posters they had designed featuring their favorite athletes and the winter sports they tried during the vacation. 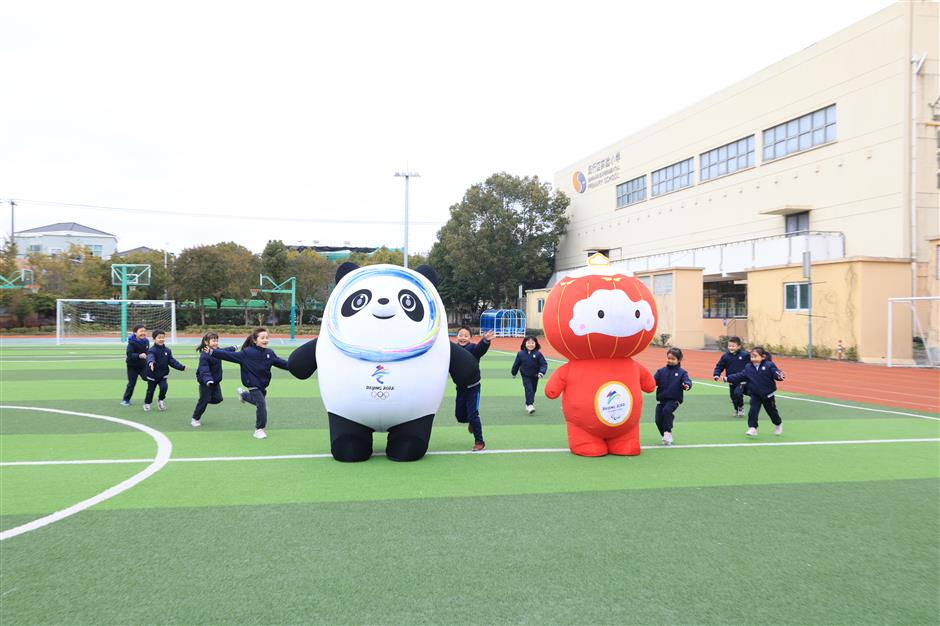 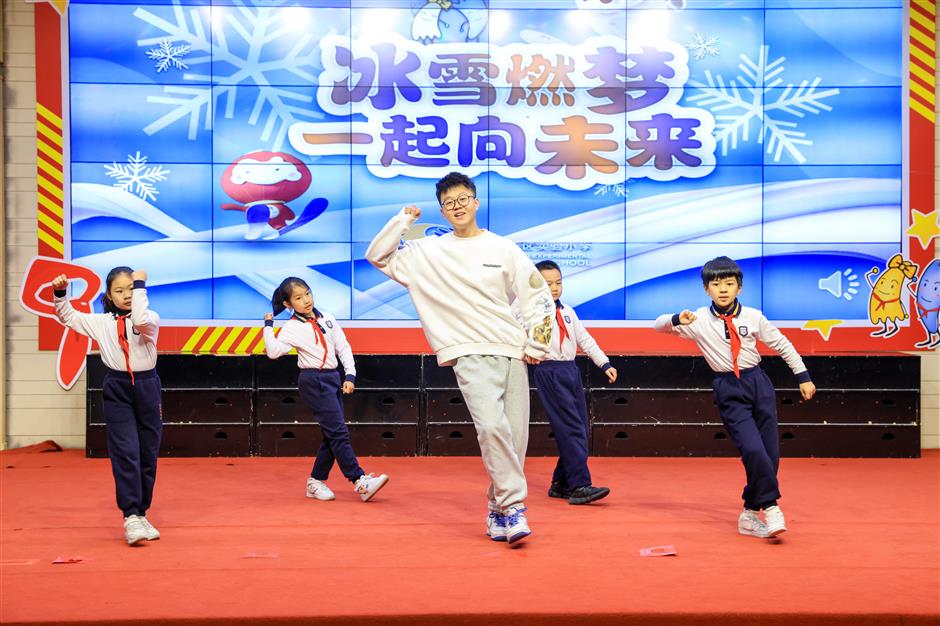 Some students perform a dance to "Together for a Shared Future," a song named after the Beijing 2022 Winter Olympics' motto.

The Lingang Minzhu Primary School in the Pudong New Area was also decorated with posters and handicrafts, many by students about the winter Olympics.

Some student reporters visited the under-construction Wintastar, which will be the world's largest indoor winter resort after its completion. They talked with architects about how the venue is being built and what sports they can expect in the future.