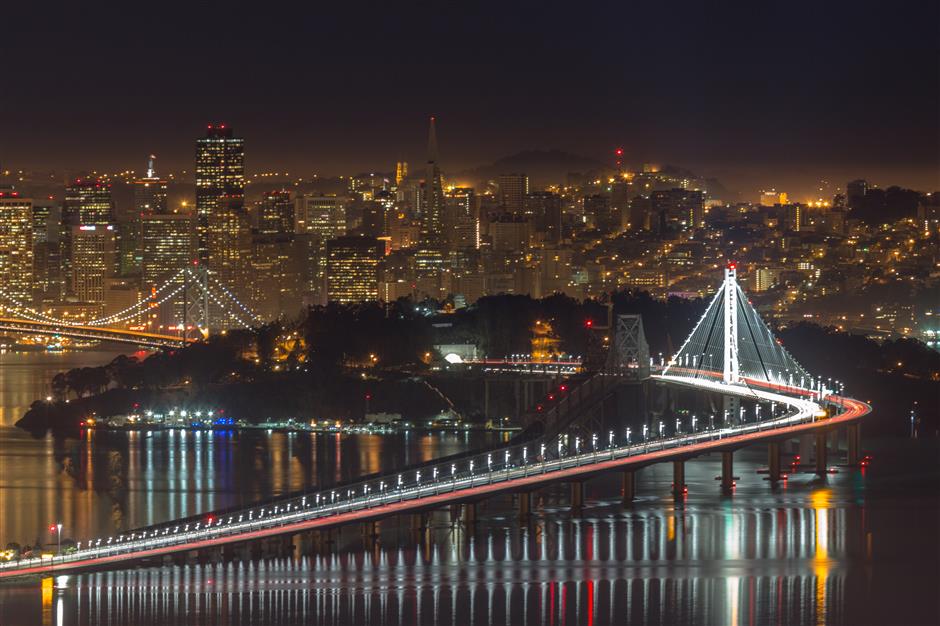 Wu Yun, vice general manager of Nantong Zhenhua Heavy Equipment Manufacturing Co Ltd, and Marshall Strabala, designer of the Shanghai Tower, on Monday told their personal stories of how they participated in building the "bridge" of Sino-American friendship and pushed it to a new "height."

They shared their stories at a commemorative event in Shanghai to mark the 50th anniversary of the Shanghai Communique, which revived China-US links after the 1949 revolution.

"It was challenging because it was the first single anchored suspension bridge and no one in the world had built such a structure before. And the US picked our company against several bidders from other countries."

Wu said the first challenge the Shanghai-based company faced was the technical requirements put forward by the US as they were different from Chinese standards.

"We managed to train 100 engineers to get US Certified Welding Inspector certificates and our workers performed so well that the bridge decks became an inspection-free product later," Wu said.

Wu said the Chinese company's rigorous attitude also impressed the American clients. The company spent nearly US$500,000 to build a 10-meter-long model of the bridge based on the original design – and found the steel tower could not be fixed correctly.

"We spent eight months to settle the problem in cooperation with our American partners," said Wu.

"If it was found during the real construction phase, the losses would be huge."

And also, the company had 1.1 million bolts assembled on site without rework.

"There were doubts if we could do this project, but when it was finally completed, the US side said that the craftsmanship met and – even surpassed – the requirements of the contract," said Wu, adding the outstanding performance won more projects for the company.

Looking back on the project, Wu said both China and the US had benefited.

"We trained a lot of talent in the program and the US people got a high-quality bridge in a short time," he said.

Although ups and downs remain in China-US relations, cooperation will continue to benefit both sides, said Wu.

He pointed out that the US is currently facing a hollowing out of industry.

"They have the technical reserves but the manufacturing capacity is phasing out. Chinese companies' advantages are their experience accumulated in plentiful manufacturing projects, and the massive manufacturing scale," he said.

The Shanghai Tower is the highest building in Shanghai.

For Strabala, his history with China predates the Communique when his teacher said "every third child born in the world is Chinese." He had two older brothers and believed he was Chinese.

As an architect, the first building he did in China was the Hong Kong Convention and Exhibition Center, where the handover ceremony of the special administrative region took place between the UK and China in 1997, three years after he started the work.

Other buildings he designed in China include the Greenland Zifeng Tower in Nanjing, the Wujiang City Hall in Suzhou, the Changxing Taihu Museum in Huzhou and the Shanghai Tower in Shanghai – then the tallest building in Asia.

"The speed at which things done in China is incredible," he said. "We call it Chinese speed. And what happens is you sort of get addicted to that.

"When you go back and do projects in the United States, it takes so long and so slow."

He said he is very confident that China-US relationship will last and will get better and better because it's what people want.

"We want it and we will do all we can to make sure it happens," he said.

"Open your eyes, see what we do together, see the accomplishments of this world when we work together – the San Francisco Bay bridge, the Shanghai Tower and everything else we've accomplished in the last 50 years since the communique. See what we can do together."