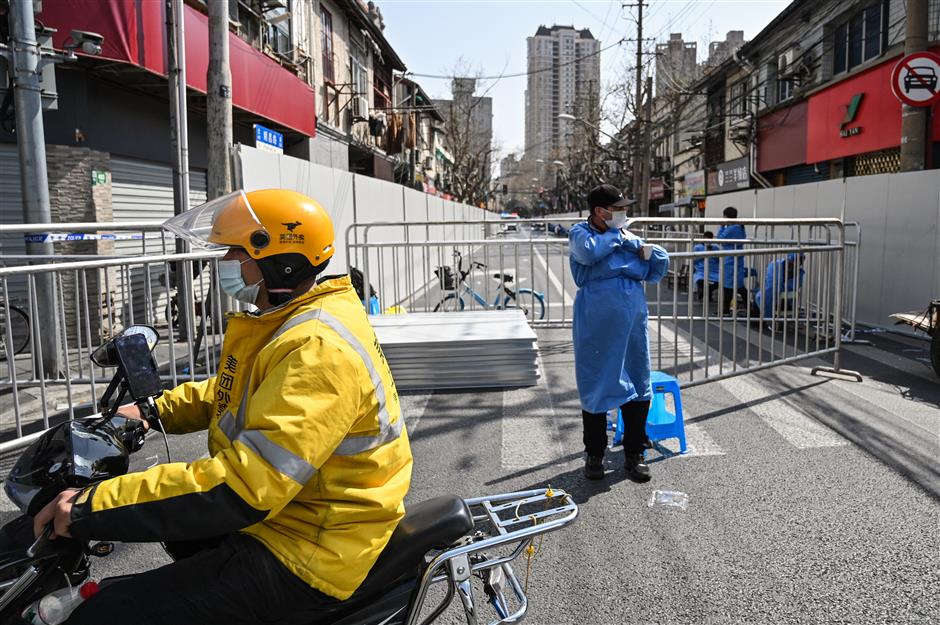 A deliveryman rides a scooter next to a locked-down neighborhood after the detection of new cases of COVID-19 in Huangpu District in Shanghai on March 15.

As many Shanghai residents shelter from COVID-19 at home, a common sight on the megacity's suddenly subdued streets is the racing, swerving scooters of food-delivery riders.

Firms including Meituan, Alibaba-owned Ele.me, Pinduoduo and Dingdong Maicai are struggling to keep up with a rush of orders from sequestered citizens in need of groceries and disinfectants.

At a sorting center in central Shanghai run by Dingdong Maicai, staff are working overtime to handle double the demand of a week ago, when the metropolis of 25 million people began battening down the hatches.

Shanghai has avoided a citywide lockdown but authorities have closed school campuses, sealed off some residential compounds and launched a mass testing.

Dingdong Maicai has hired 300 additional staff across the city in recent days, some of them restaurant workers left idle by closures.

China's hordes of scooter delivery drivers were hailed as national heroes two years ago when they kept untold millions fed during huge lockdowns when the virus first emerged.

The lessons learned from 2020 – and no small amount of bravado – have helped companies stay on top of the crush this time around.

"We are an iron army. Whatever artillery fire we face, we react quickly," said Zhang Yangyang, manager of the bustling yet tidy Dingdong sorting depot.

Since its initial outbreak faded two years ago, China has largely kept the virus under control through a dynamic zero-COVID strategy. 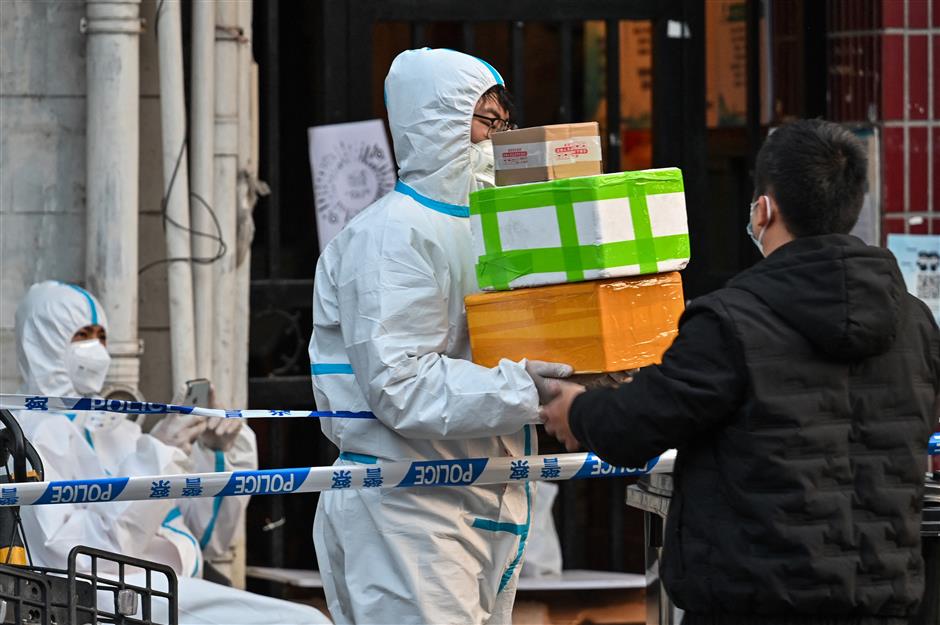 A deliveryman delivers an order outside of a locked-down neighborhood in Huangpu District in Shanghai on March 15.

Although its national daily case number is unremarkable globally, it represents the country's worst uptick in infections since the start of the pandemic.

With the highly transmissible Omicron variant spreading, authorities have imposed stay-at-home orders or other restrictions in several cities.

China has one of the world's biggest and most developed ready-meal and grocery delivery sectors.

Slick smartphone apps enable users to place one-click orders from virtually any restaurant or food store within a several-kilometer radius, with the apps even displaying the delivery rider's body temperature.

Food runners report they are currently making up to 100 deliveries a day, which are often left outside housing complexes to avoid human contact.

Dingdong Maicai staffer Li Yawu has found himself suddenly working up to 15 hours a day, after which he goes home to "soak my feet."

"It would be untrue to say I wasn't scared in the beginning," he said of delivering to neighborhoods where COVID-19 has taken hold.

"But when you deliver food into a user's hands and there is that much gratitude in their eyes... I don't feel scared anymore."