College students in Shanghai have coped with campus lockdown in a variety of ways as universities began keeping students in for nearly two weeks in an effort to hold the pandemic in check.

Shanghai imposed phased lockdowns in Pudong and other areas south and east of the Huangpu River on March 28 and in Puxi, or the districts on the west side of the river, from April 1.

According to the city education commission, universities in Shanghai have initiated "closed-loop management" since mid-March. But some East China Normal University students on the Minhang campus found novel ways to cheer themselves up. 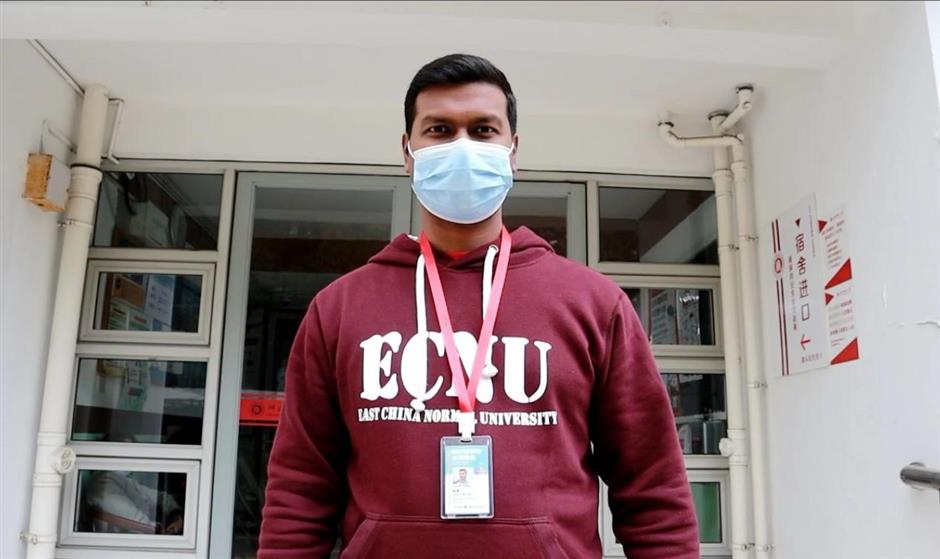 Pritam Saha, a third-year PhD student from Bangladesh majoring in Chinese philosophy, has taken on the role of dorm assistant in the international student dormitory during the lockdown.

He is quite busy with his daily work.

"My main duty is to ensure all foreign students complete their nucleic acid tests, and share all the information in the WeChat group. It also involves distributing meals to students every day, and few other stuff."

"I feel proud to be a dorm assistant and am very happy to serve everyone during this critical time," said Saha.

Aside from volunteering, he spends the majority of his time reading books. He believes that reading can help him forget all his problems.

He also introduced the campus life of other international students around him.

"They are doing online classes and completing their homework regularly. Some students are exercising, others are watching movies or listening to songs, and even dancing. The Global Education Center of ECNU also organizes different activities to keep them happy and occupied. Overall, they're very well," Saha said.

He said that all he wants to do after the epidemic is to play badminton and eat delicious Chinese food with his friends. 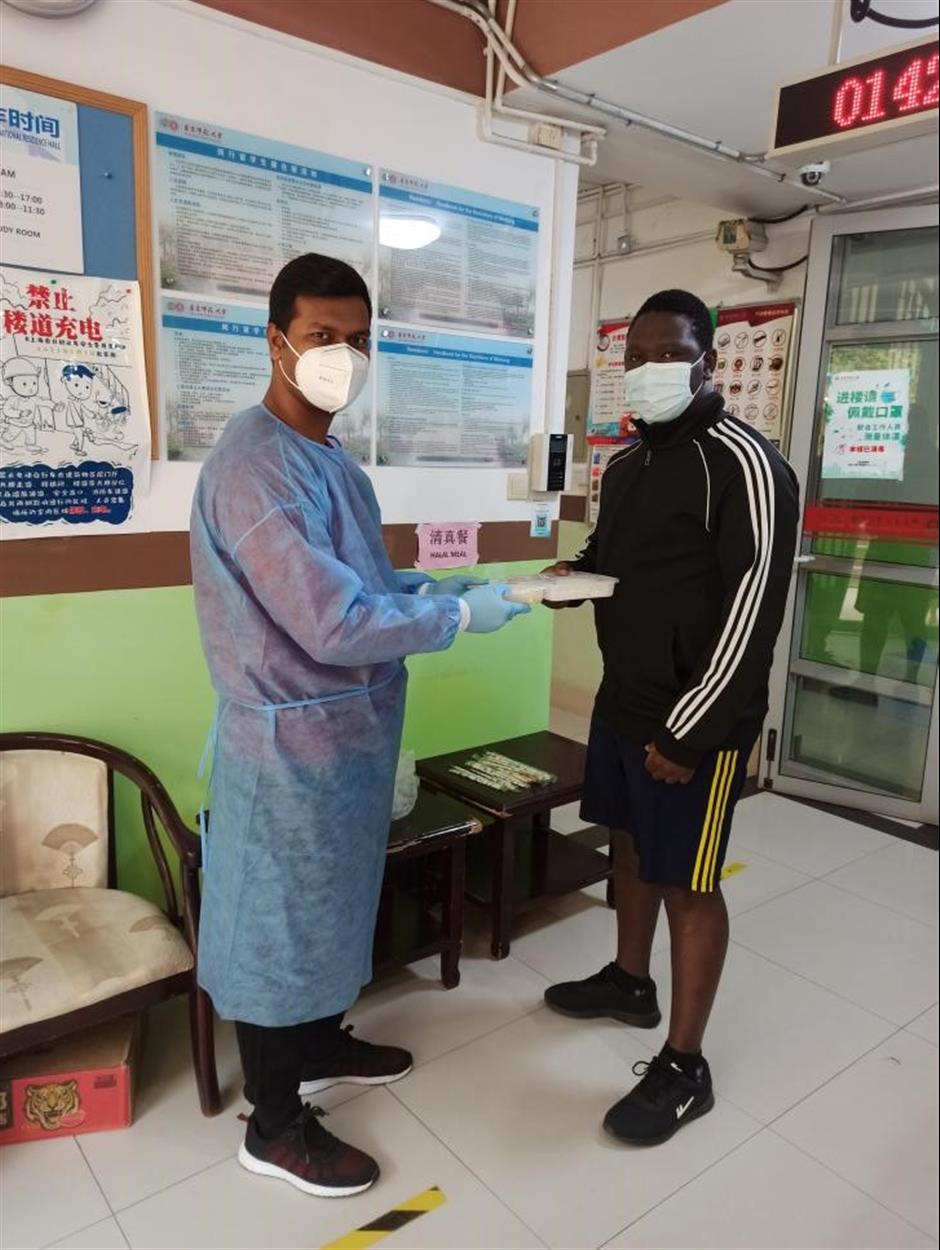 Pritam Saha delivers a food package to another student.

During the closed-loop management period, many college students gathered on their balconies and put on a "concert," including ECNU students.

A student posted a series of choral videos on Bilibili, titled "Dorm Balcony Music Festival Under the Epidemic," which was viewed 560,000 times.

The songs sung by the students are mostly classics that are part of their generation's collective memory. Some of the students set up stereos on the balconies to set the tone.

"Life in quarantine can be very boring. Shanghai is in its best season now, but we can't go outside to meet our friends. Singing together makes me feel like life is still enjoyable. There are so many people supporting each other in this difficult time," said Shao Xueqing, a second-year master's degree student.

There are numerous comments under the videos by people from all walks of life, including ECNU and other university students, as well as those who have visited the university.

One of the comments read: "The epidemic has severely limited us, but our enthusiasm for life has not waned." 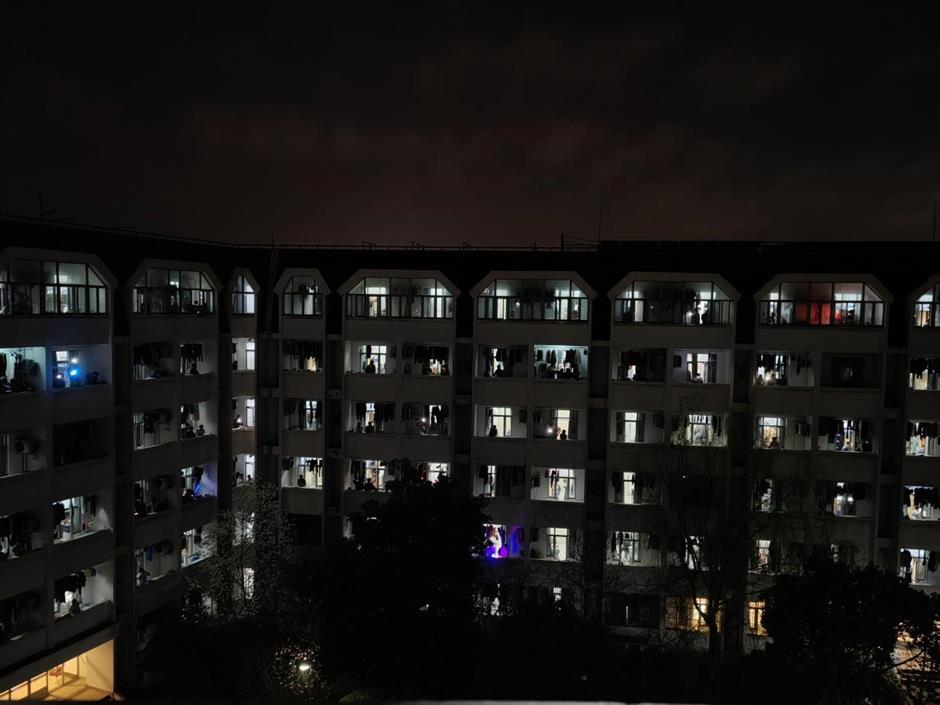 East China Normal University students hold a balcony music festival to cheer each other up during the lockdown.

Xie Xinyi, a Chinese painting major at ECNU's College of Fine Arts, drew a cartoon to document the first few days of closure with her friend.

It depicts several characters and scenes on campus, such as volunteers assisting students with takeout, school staff and students playing.

They titled the cartoon "Under the Pandemic" or "Observer of ECNU in Quarantine." It was published on the WeChat account set up by students of the college.

It took Xie more than three days to complete the work.

Her friend Chen Yue, a student from the School of Marxism, offered some innovative ideas, like adding the element of Bing Dwen Dwen and other Internet buzz words, to make it more attractive.

"Every detail is so real. I hope the epidemic ends soon," some netizens chimed in.

The cartoon was also reprinted and used as promotional material by the school's WeChat accounts.

"The comic magnifies the details of our lives and records some of the beautiful moments. Everyone in this work has their own lines that reflect our real life," Xie said.

A cartoon designed by Xie Xinyi, a student at East China Normal University, records the students' university life in quarantine.

The cartoon, titled "Under the Pandemic" or "Observer of ECNU in Quarantine," is published on a public WeChat account (YooliaoStudio).