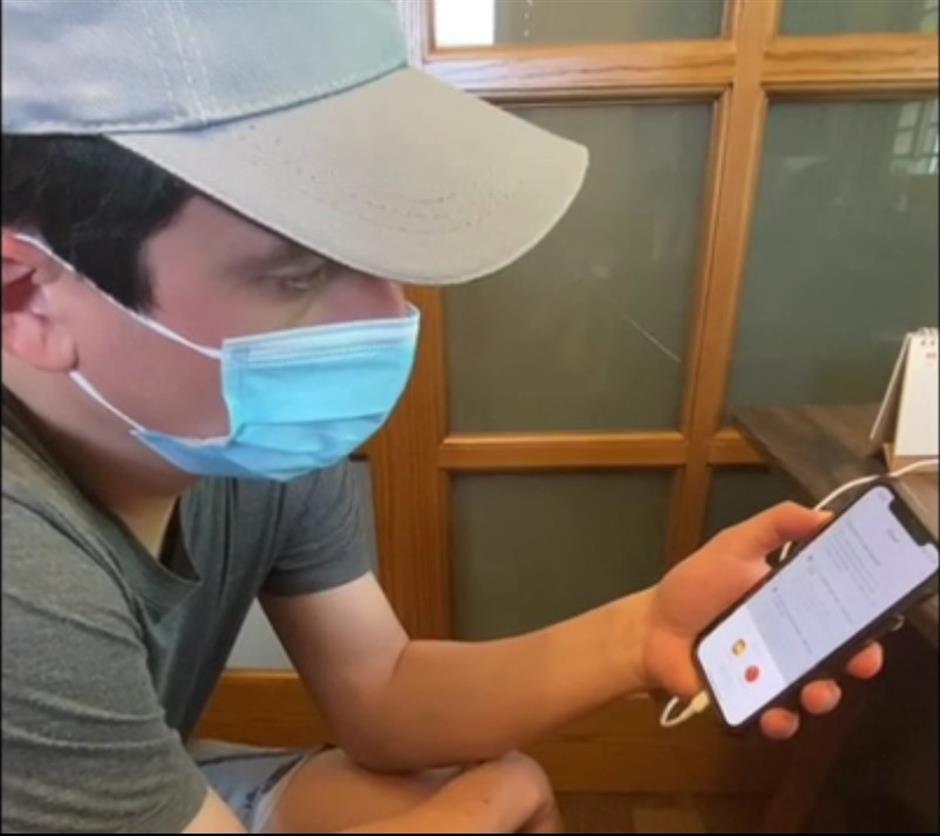 Samuel Leapan Gonzalez, a Spanish national living in Qingpu District, uses the "Trans On" application to communicate with the neighborhood committee staff.

When Samuel Leapan Gonzalez, a Spanish national living in Qingpu District, wanted to know about the pandemic situation in his community, he could not communicate with the neighborhood committee because of the language barrier.

However, he made a call on the "Trans On" application.

With help from an online interpreter, he learnt from a staff member that their compound had just been downgraded from a locked-down area to a controlled area and he could walk around within the compound.

And if there were no new cases reported in the next seven days, the compound would be further downgraded to the precautionary level and he would be able to walk around the community, which has become a reality.

Gonzalez, who has been working in an international school in Shanghai for three years, said he could speak a little Chinese but there are words that are difficult for him, and his accent may also hinder people from understanding him.

After school staff recommended the "Trans On" app, he tried it and was surprised at its efficiency.

"You just call and suddenly get someone like your personal assistant," he said. "That was amazing. I didn't expect that was going to happen and it was very fluent. And everything was in Spanish. That was really astonishing. If it's in a situation that you don't know, you are nervous to communicate, using your native language is extremely important."

Gonzalez said he would try to use it in other situations in the future, such as talking with tax drivers, as he had experienced such difficulties in the past.

If it's in a situation that you don't know, you are nervous to communicate, using your native language is extremely important.

The 24/7 on call interpreter volunteer services are provided by a team under a campaign initiated in mid-April by the School of Foreign Languages of Tongji University.

"During the pandemic, we've heard touching stories of local citizens sharing vegetables and other daily necessities with foreign neighbors, but there are also others who were isolated in their apartments and could not communicate with volunteers and medical staff because they couldn't speak Chinese," said Xu Wensheng, one of the initiators and a professor at the Tongji University School of Foreign Languages.

"We translators and interpreters have been thinking what we can do to help society when Shanghai exercised the two-step lockdown. Therefore, we decided to launch the Any Call volunteer interpreting project."

Users only have to click the "ANYCALL" button at the bottom of the interface, select a language, choose or describe the category of challenge they are facing, and wait to be connected with an interpreter. 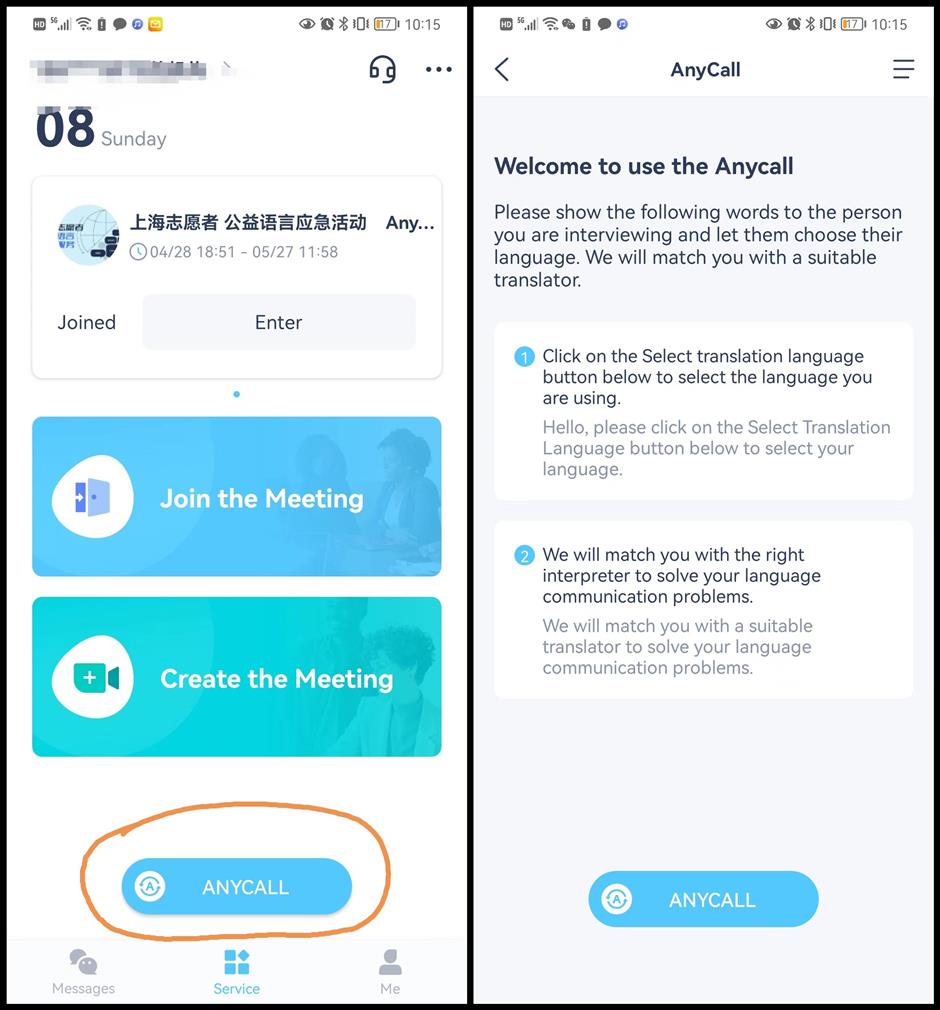 Users can click the "ANYCAll" button to make a call on the app.

More than 300 teachers, students and professional and part-time interpreters registered on the app and submitted applications to become a volunteer. The vast majority registered for Chinese-English interpretation.

The applicants include Chinese students from Shanghai, Beijing, Guangzhou, Chongqing, Wuhan, Chengdu and Nanjing, and also international students from Japan, South Korea, Russia, Tunisia, Egypt, and other countries, as well as Chinese and foreign teachers working in different institutions, according to Xu.

The applicants need to submit detailed personal information, such as language proficiency certificates and voluntary service experiences, to show their service capacity.

After being admitted, they received training on the art of speaking and typical COVID-19 related occasions and terms. Instruction manuals and other documents were prepared and translated into different languages by volunteers too.

"They are on standby during their spare time and serve dozens of people each day," he said. "Most of the help seekers had difficulties in communicating with neighborhood committee staff, volunteers, group-purchase organizers and deliverymen."

Xu said the app is now being promoted in local communities, such as the Biyun International Community in the Pudong New Area, to help people needing interpretation services and are well received .

Some of the volunteers from local universities

Chloe Chen, a third-year English major at Shanghai International Studies University, is one of the volunteers. She said the program has been popular among her classmates.

"Our university has been encouraging us to practice what we've learned in real work and I have served in several international meetings before," she said.

"When locked down on campus, we had few chances to serve society in the fight against the pandemic. The project enables us to make our contributions in a safe and comfortable way because we don't have to go to the front line or wear protective gears. So I registered for it immediately after I got to know it from my teacher."

Chen said her class schedule was not too busy and she began to provide services during breaks on May 6.

"There are so many volunteers ready for Chinese-English interpretation that I have to be quick enough to grab an order," she said.

In the past few days, Chen served six or seven people each day.

"It's interesting that many of the users just called to check whether the service is really available, and they are surprised and happy to find that it's real and free of charge," she said.

"Most of the calls I have received were foreigners who were anxious after being locked down for long and are eager to know the latest pandemic control policies, while some had problems in getting a nucleic acid test code. I helped them get the answers from the community staff and volunteers. I feel proud and happy that I can help them solve their problems."

Another volunteer who gave her name as Fiona is a graduate of Shanghai International Studies University and now works for a company teaching foreigners Chinese.

"I understand the difficulty for foreigners to talk with locals as many of my students who have passed high-level Chinese proficiency tests had faced problems in real-life communication," she said. "For example, my student Luce had called me for help when he and a friend were in a store and could not make the shop assistant understand that they wanted rosemary."

She has to teach online classes during the day so usually provides services at night these days. She has served more than 20 people.

One call she received was made by a foreigner who asked her to explain to the neighborhood committee staff that he and his family didn't want to take the nucleic acid tests.

"He thought it was risky since they hadn't taken any anti-COVID-19 vaccination while his neighbor on the same floor had tested positive," she said. "The committee staff explained that the neighbor had been transferred to a makeshift hospital and the whole building had gone through disinfection, but he still refused to go downstairs to take the test."

Another call was made by a compound security guard.

"A foreigner there had bought some chicken nuggets in a group purchase and he went to the gate to pick up his order, but the deliveryman didn't know what he had bought. It happened that the security guard knows the app and we helped them with communication so that the foreigner got his chicken nuggets."

Fiona said such services also improved her own understanding of pandemic control policies and her capability to explain the policies to her neighbors, both Chinese and foreigners. 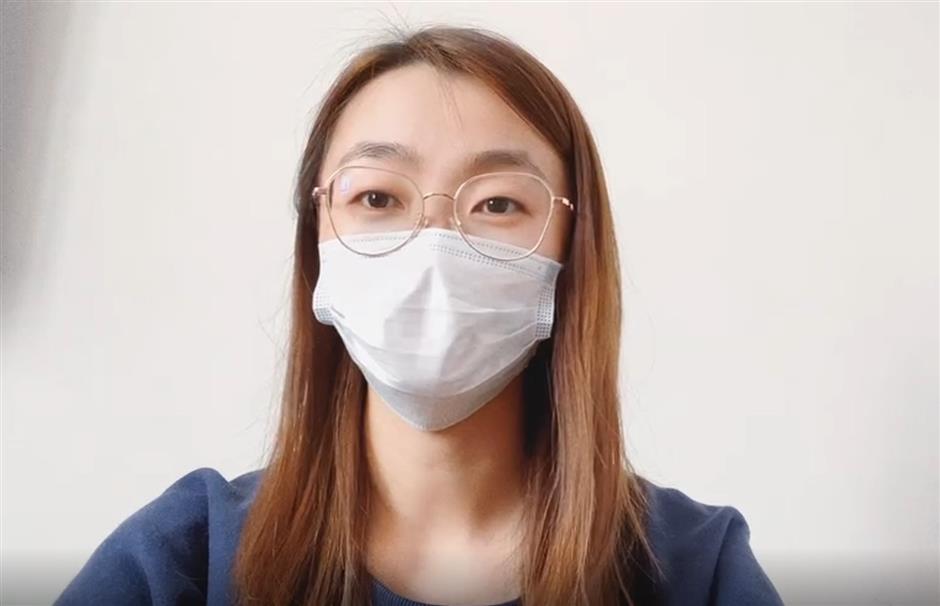 Tian Baozhu, one of the interpreters, is an active volunteer in her community during the pandemic.

Tian Baozhu, a graduate of business administration from East China Normal University who now works for an Internet company, also joined the team.

"I have been volunteering in my compound with my mother, organizing group buying and COVID-19 tests, and helping senior residents with buying food," she said. "So when I saw a poster about the program, I registered and began service in late April."

Among her callers was an elderly American man who needed to go to the hospital get medicine for heart disease, but didn't know how to get out of the compound.

Some other volunteers had assisted him in communicating with his building chief and neighborhood staff to get a pass to go out.

When he was in the hospital, the building chief sent him a message and asked him to do an antigen test and submit a photo of the result in their WeChat group.

"He didn't know what the building chief was talking about and made a call with the app again," said Tian. "This time, it was me who answered the call. He showed me a screenshot of the message and I told him what the chief said. He did the test in the hospital immediately."

She said she had also helped some Frenchmen and Africans in her community to get to know the policy for dog walking, and recommended them the app so that they may get help when she was unavailable.

"I feel happy to be able to help others," she said. "And I also found the app is helpful. If I encounter difficulties when travelling in other countries in the future, I would like to use it too."