Half of city-level makeshift hospitals now phased out 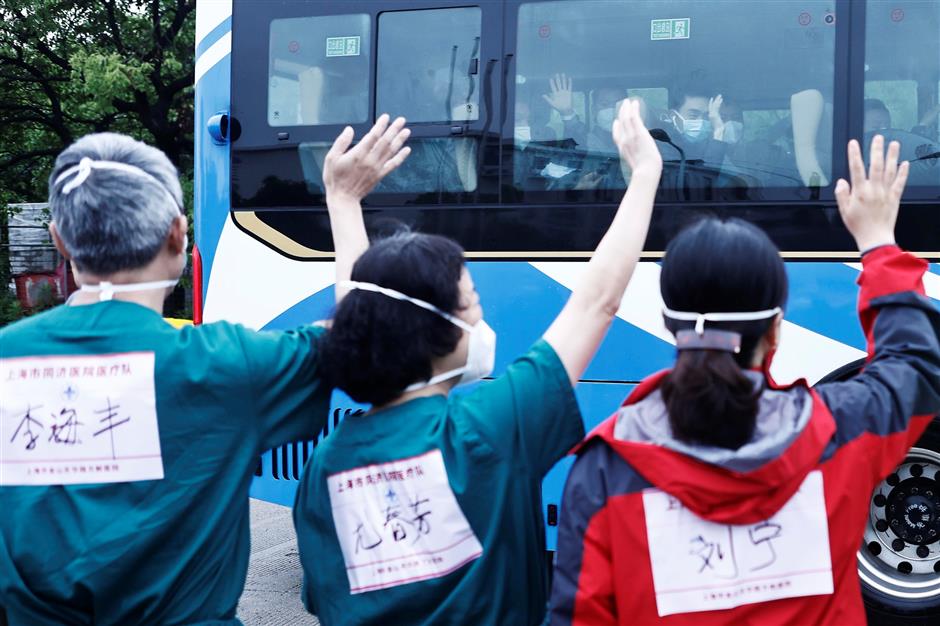 Medical staff bid farewell to the last group of patients at a city-level makeshift hospital in Jinshan District on Friday.

Half of Shanghai's major makeshift hospitals have been shut thanks to the sharp decrease in the number of COVID-19 patient admittances.

Five of the 10 city-level makeshift hospitals, mainly in the suburban districts, have been suspended as of Friday, said Ding Bo, a city official in charge of the transportation of COVID-19 patients.

At present, there are 50,000 patients under medical observation or treatment at the makeshift hospitals, only 20 percent of the peak number, Ding said.

The makeshift hospitals at the Shanghai International Circuit in Jiading District, Pudong's Canghai Road in Lingang area, Changxing Island in Chongming District and Tianhua Road in Jinshan were closed between Monday and Friday. The Jiahe Xinyuan makeshift hospital was shut at the end of April.

The remaining city-level makeshift hospitals in Pudong and Chongming are still under operation. They are at the National Exhibition and Convention Center, Shanghai New International Expo Center, No.1 bonded area of Lingang, Shanghai Expo Exhibition Center and Fuxing Pavilion of China Flower Expo.

Part of them will also be suspended, while others will be kept according to the development of the city's COVID-19 resurgence, Ding said. 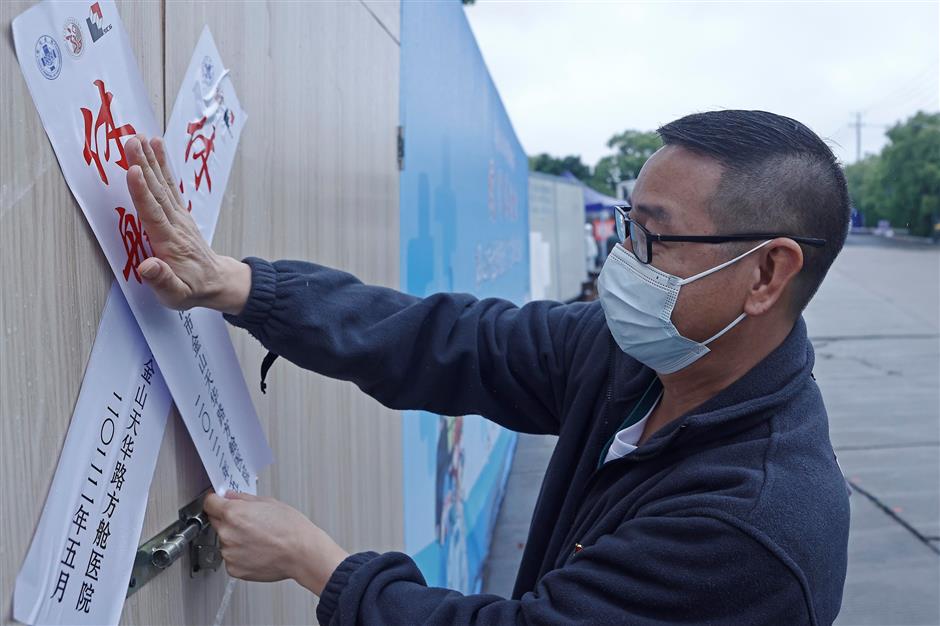 A staff members sealed the makeshift hospital in Jinshan District.

Since then, the city has provided a total of 195,000 beds for COVID-19 patients at the temporary facilities, including many re-purposed from exhibition centers and stadiums and some newly built facilities.

All the 68 district-level transfer sites have been shut down. More than 95 percent of the 288 planned makeshift hospitals within local schools have been removed, followed by strict cleaning, disinfection and safety evaluation.

Ding said the transfer, reception and discharge processes at the remaining makeshift hospitals will be further improved.

For instance, family members will be allowed to live in the same area, despite not being infected simultaneously.

Senior patients will be discharged along with their family members to make sure they can be escorted home.

Furthermore, some study rooms for students have been prepared at large makeshift hospitals such as the National Exhibition and Convention Center.

The number of local daily infections dropped by about 20 percent to 1,681 on Friday. Only one was detected in precautionary areas. 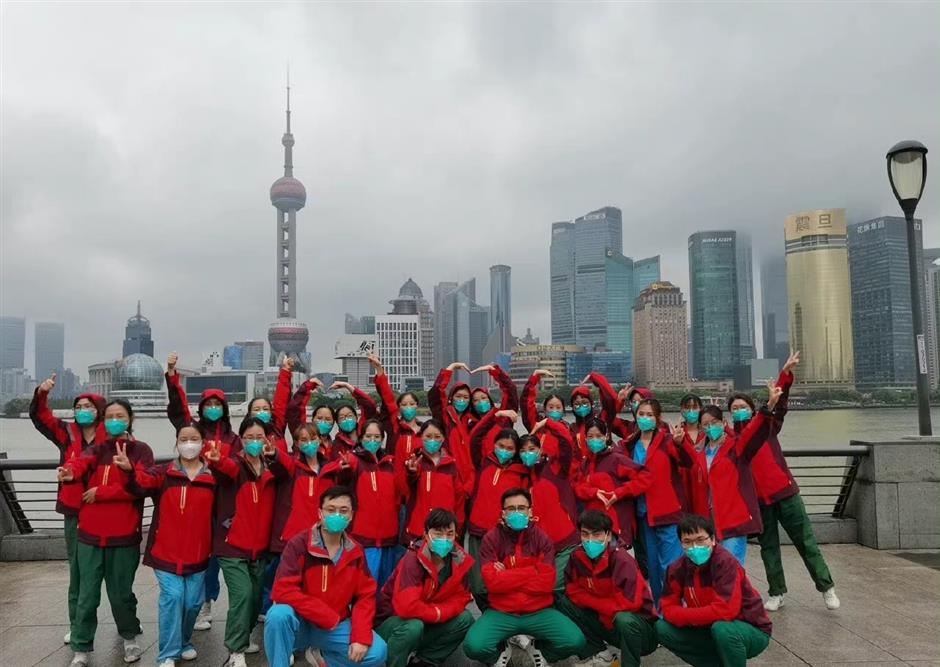 Medical staff from neighboring Jiangsu Province pose on the Bund before returning home.

More than 18 million local residents, some 72 percent of the city's population, are in precautionary areas, which are communities, villages, companies and sites, without a positive case in the past two weeks.

The number of residents in locked-down areas is 1.8 million, while more than 3 million are in controlled areas.

Zhao Dandan, deputy director of the Shanghai Health Commission, said the risk of resurgence at present mainly exists in local old residential communities. He asked to enhance the disinfection for communal kitchens and toilets as well as stairs and garbage rooms. Inhabitants are asked to stagger their use of shared facilities.

Sun Xiaodong, deputy director of Shanghai Center for Disease Control and Prevention, said citizens should keep following the regulations of the "three-area" designation, cooperating with the epidemiological investigation and PCR screening as well as wear proper PPE when going out.

When Shanghai firstly introduced the three-area designation on April 11, the number of locked-down areas equaled that of precautionary areas.

"As of yesterday, the number of precautionary areas has more than doubled the total amount of locked down and controlled areas, which means the three-area designation has effectively contained the spread of the virus," Sun said. 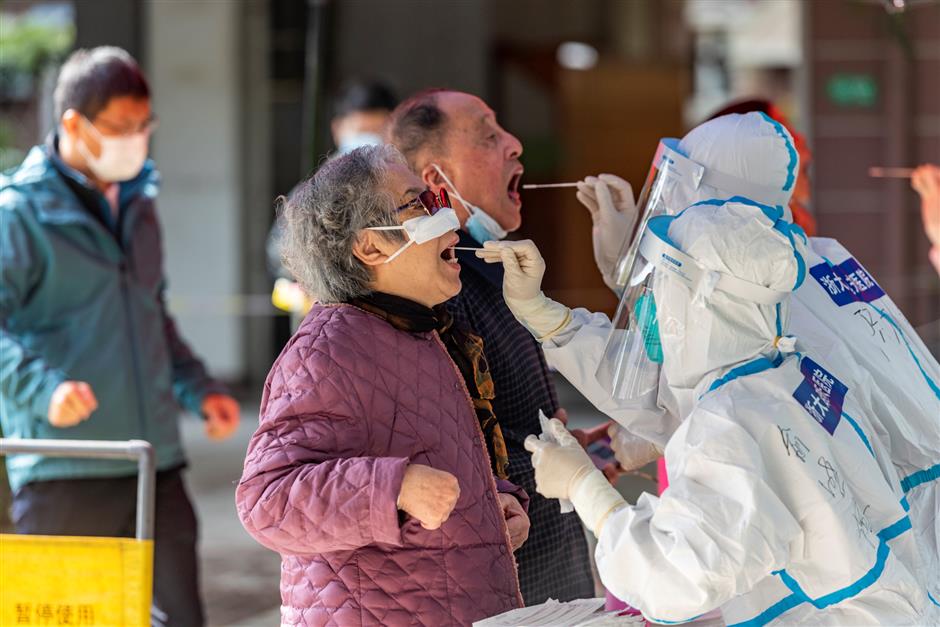