Eyes on Shanghai
Provided by AFP.

A couple in Shanghai have beaten COVID lockdowns and bureaucracy to tie the knot, celebrating their marriage in the car park of their housing compound after a ceremony officiated via Zoom from the United States.

With the "Bridal Chorus" on speaker, a smattering of socially distanced friends and an immaculate white dress complete with blue surgical mask, bride Janelle Nuyts walked down the aisle followed by an official in a hazmat suit who disinfected the ground around her.

Shanghai's weeks-long lockdown has brought the business hub of 25 million people to a halt as China sticks with its zero-COVID policy.

But an easing of the rules in recent weeks has allowed some residents out of their homes, although mostly within the confines of their housing developments. 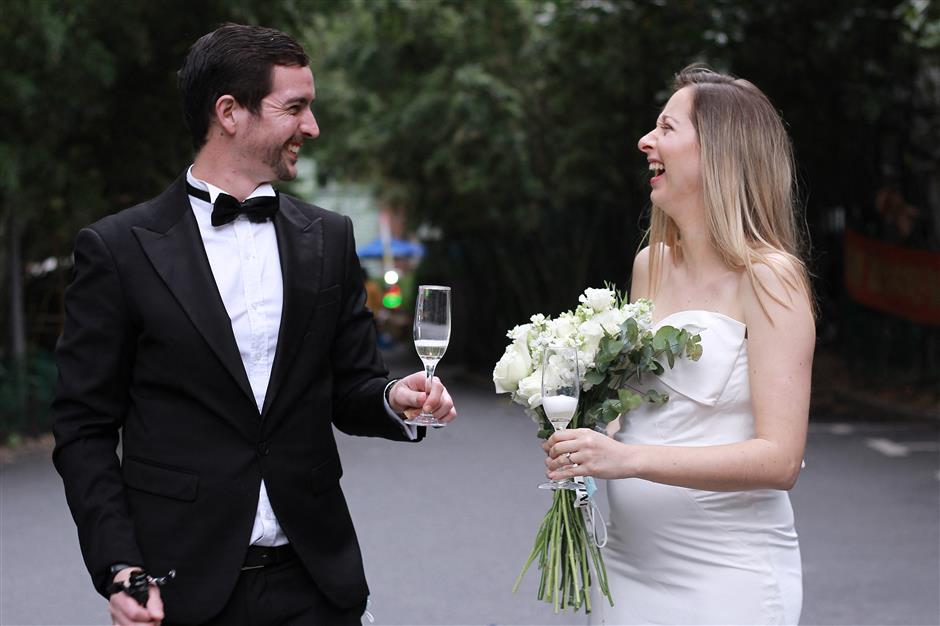 This handout image taken on April 30, 2022 and received on May 6, 2022 courtesy of Jessie Lu shows groom Matthew Mitchener (left) with his bride Janelle Nuyts celebrating their wedding in the car park of their housing compound during lockdown in Shanghai after a ceremony officiated via Zoom from the US.

Groom Matthew Mitchener, 35, said he initially had doubts about a lockdown wedding but they melted away Saturday when he caught sight of his bride in a figure-hugging wedding dress highlighting her five-month baby bump.

"It was all a little surreal," the Australian said, beaming, as neighbours threw rice around for good luck and cheered.

After a month stuck at home, the couple had their wedding officiated online by a US celebrant, with friends and family as witnesses, before they headed to the car park of their compound for a small celebration.

A ban on marriage between foreigners in China in place since 2019 prevented the pair from using a Chinese official, and the option to tie the knot at one of their embassies was not available.

The car park celebration had only been decided on a day before, when the couple's neighbors suggested they hold a reception party there after an easing of restrictions made it possible.

"It kind of snowballed," said Mitchener. "The next thing we knew, we had a wedding dress arrive from our friend, and a wedding cake, a bouquet of flowers."

"Once I put the dress on, everything changed," the 33-year-old Nuyts added.

The pair decided in March to have their wedding officiated online after discovering they were expecting a baby.

"It was beyond our expectations," said Nuyts of the big day.

"We didn't really expect it was going to be so romantic."