Zhang Yihui packed up his stuff immediately on hearing that four Metro lines and more than 270 bus routes in Shanghai would resume, following a further easing of the long COVID-19 lockdown in the city.

Shanghai reopened a small part of the world's longest subway system on Sunday after some lines had been closed for almost two months. Trains will run 20 minutes apart for limited hours.

Hailing from Suqian in neighboring Jiangsu Province, Zhang had been staying in a Shanghai hotel for nearly two months and all he wanted, more than anything else, was to return home.

He walked for more than 20 minutes to Chifeng Road Station of Metro Line 3, heading for Shanghai Railway Station in Jing'an District.

"Actually I haven't bought a ticket as it is extremely difficult to get one now, but I heard that there are scalpers selling tickets at the railway station so I want to try my luck anyway," Zhang told Shanghai Daily.

"I came to Shanghai in late March, hoping to find a job. I never thought I would be staying in that hotel for so long." 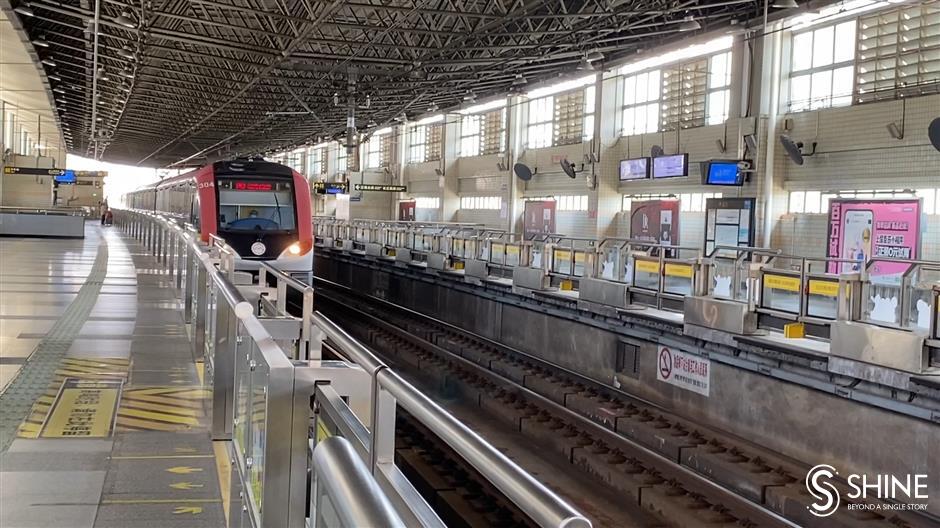 A Metro Line 3 train arrives at a station on Sunday, the first day when parts of the city's subway services resumed.

The Line 3 train, running between Shanghai South Railway Station in Xuhui District and Jiangyang Road N. Station in Baoshan District in the north, had much fewer passengers than before the lockdown but was not as empty as Zhang had expected.

Each carriage had around four passengers, most of whom carrying luggage like Zhang. Some wore protective suits from head to toe, while the rest just wore facial masks as required.

Before entering the station, passengers must scan a venue code – only those with a green code could get on board – and hold a 48-hour negative polymerase chain reaction test report. Their temperature is also checked at the security checkpoint. 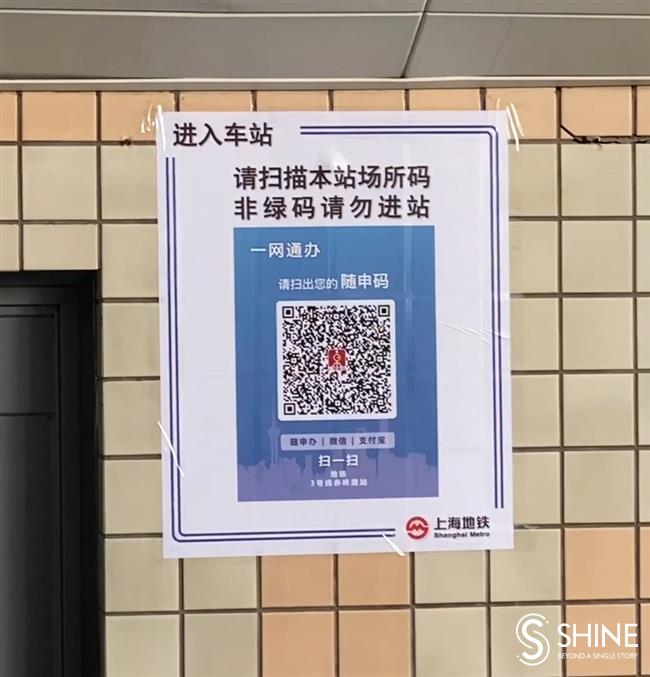 Passengers need to scan a venue code before entering a Metro station.

The Metro station was generally quiet. The usually busy restaurants, snack bars, convenience stores and bubble tea stalls were all closed. Ticket vending machines were working but no manual ticketing was available.

On the train, the broadcaster reminded passengers that only those who already had train tickets could enter the railway station, but that didn't seem to faze Zhang.

"I can't go back to the hotel anyway once I'm out," he explained. "If I can't get a ticket, I will just sleep outside the station." 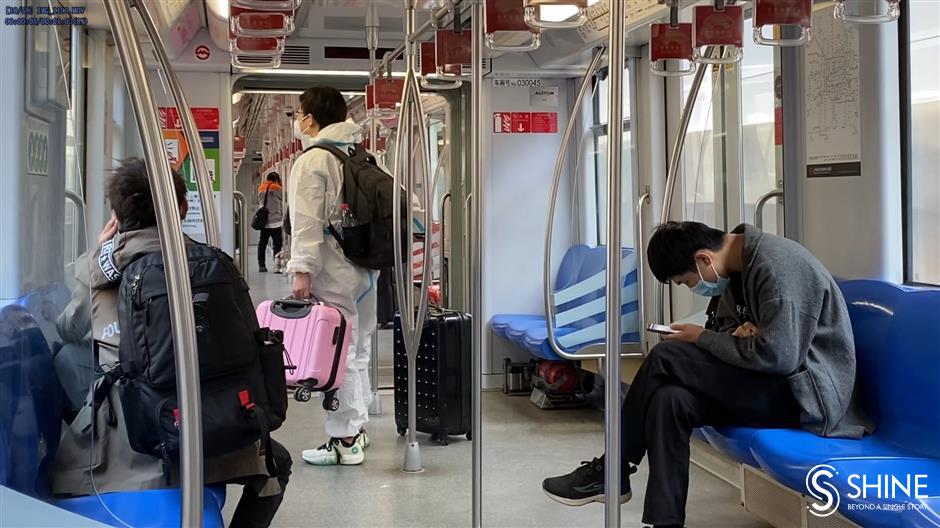 Most passengers on the Metro on Sunday seemed headed to railway stations in Shanghai, hoping to catch a train to return home.

Zhang's luck was still up in the air but staff at the railway stations were certainly not able to go back home.

At the Shanghai South Railway Station terminal, a cleaner, who requested anonymity, said that she returned to work two days ago, and had been staying in the station ever since.

Apart from usual cleaning tasks, her most important job is to sterilize the station daily. Spraying sanitizer on a cleaning cloth, she wipes places that are frequently touched, such as handrails, vending machines and elevator buttons, from time to time throughout the day.

"Now I'm all on my own here, but I can handle it," she said. "The station is huge as three (Metro) lines stop here, but now the passageways toward the platforms for Line 1 and Line 15 are closed." 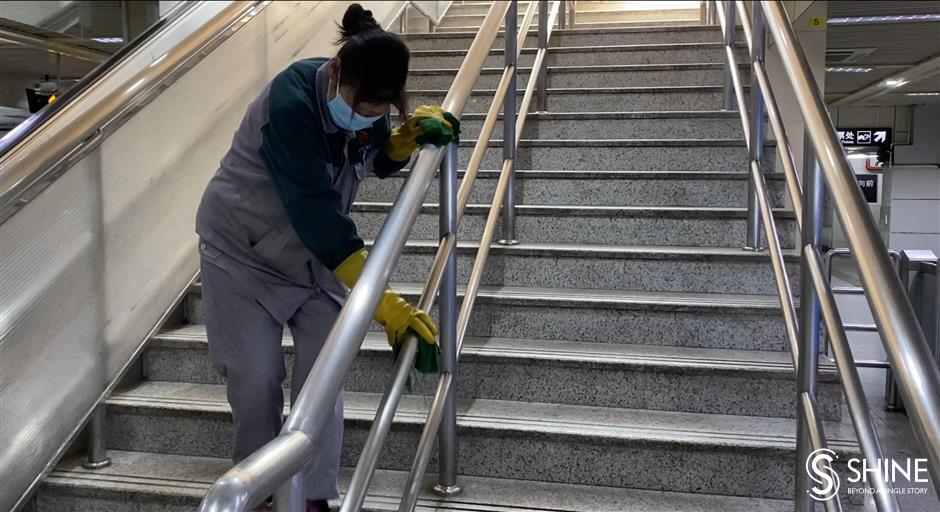 Shanghai expects to lift its citywide lockdown and return to more normal life from June 1. Most restrictions on movement will remain in place this month.

A driver, who defined himself as Shen, told Shanghai Daily that he had only five passengers during the entire morning. His No. 123 bus route should be one of the busiest in the city as it runs between Hongkou District and People's Square in Huangpu District, passing many residential compounds and two major hospitals.

"I didn't expect many passengers anyway as most people are still required to stay at home," Shen noted.

Passengers are required to scan the venue code as well, either at the stop or in the bus.

As the buses are running at a much longer interval than before, it is recommended to double-check their arrival time, or one may have to wait for around half an hour if a bus is missed.

Shen said that sterilizing work is carried out after each run. Sanitizer is sprayed inside the bus and windows are open wide for a while before the next run.

His bus runs from 7am to 7pm, and after work Shen would go back to his dormitory.

"I work every other day, and the dorm is now my home," he said. "I hope that soon Shanghai people will be able to freely go wherever they want, to home or work." 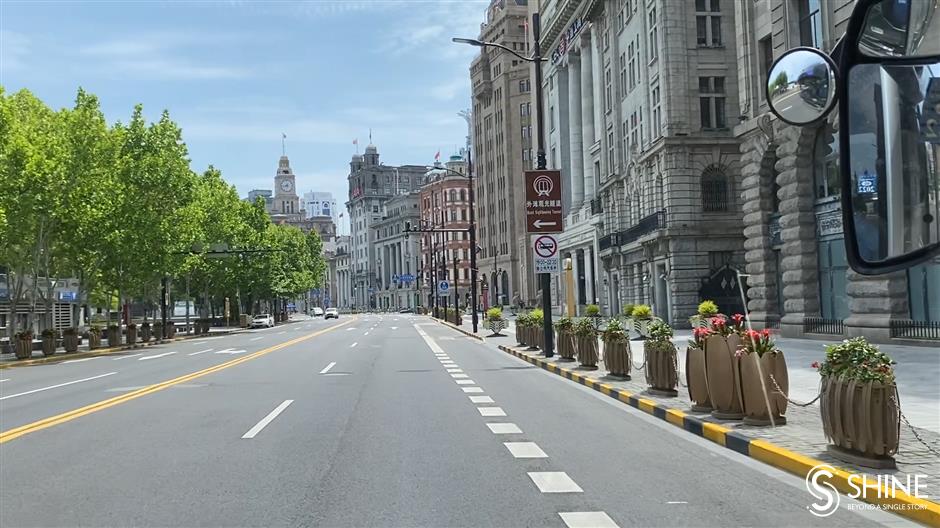 A view of Shanghai's iconic Bund from inside a public transport bus on Sunday.