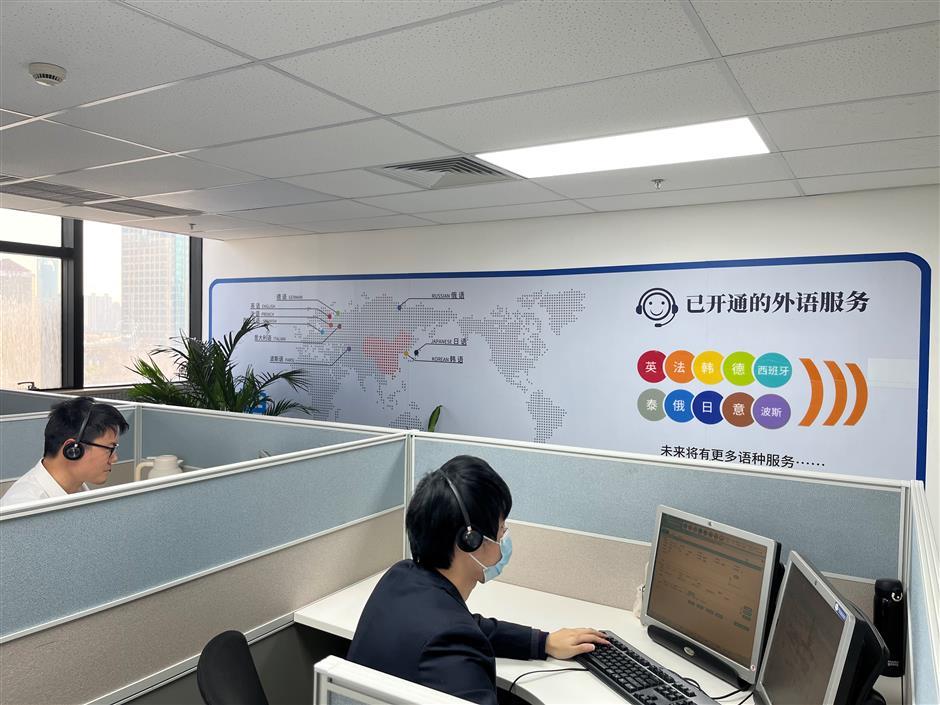 Operators with the 12345 hotline's multilingual services at work.

Shanghai's 24-hour government-run, public-service hotline 12345 has witnessed a burst of calls from expatriates living in the city since the COVID-19 resurgence, with the nucleic acid test code and three-area designation among the most-asked topics.

Following the launch of its multilingual service at the beginning of 2020, the service has operated 24 hours a day.

Between March 1 and mid-May, the hotline received 7,677 calls, 812 percent more than the same period last year. The majority of callers are from the United States, Europe, Japan and South Korea.

The subjects varied with the development of COVID-19, 12345's operator said.

In the beginning, most calls concerned quarantine policies, the transfer of close contacts of COVID-19 cases and supply of daily necessities.

As authorities stepped up efforts to guarantee the supply of goods and improve the release of policies, the number of relevant calls dropped significantly as a result, 12345 officials said.

In April, as the city launched the nucleic acid test code, many expats asked how to check their test result and use their passports to access the code.

In May, as the pandemic waned, calls regarding the "three-area" designation and relevant management policies grew, including whether people can step out of doors and when normal production and operation of businesses will resume.

"Due to language barriers, some foreign callers sought help when they encountered difficulty communicating with neighborhood committees," said Yin Feng, a staffer with the hotline.

"Under such conditions, our hotline operators would patiently explain relevant policies and rules to them, helping relieve their anxiety and coordinate with their neighborhood committees," he said.

The hotline staff also collected some commonly asked questions from foreign callers and forwarded them to relevant government authorities to help tackle requests.

Foreign callers can seek help by pressing 7 after dialing 12345. They are able to seek help, make inquiries or forward complaints and suggestions.

More foreign language service channels such as WeChat and a website are also on 12345's agenda this year to provide more convenient and efficient services for expats living and working in Shanghai, operators said.