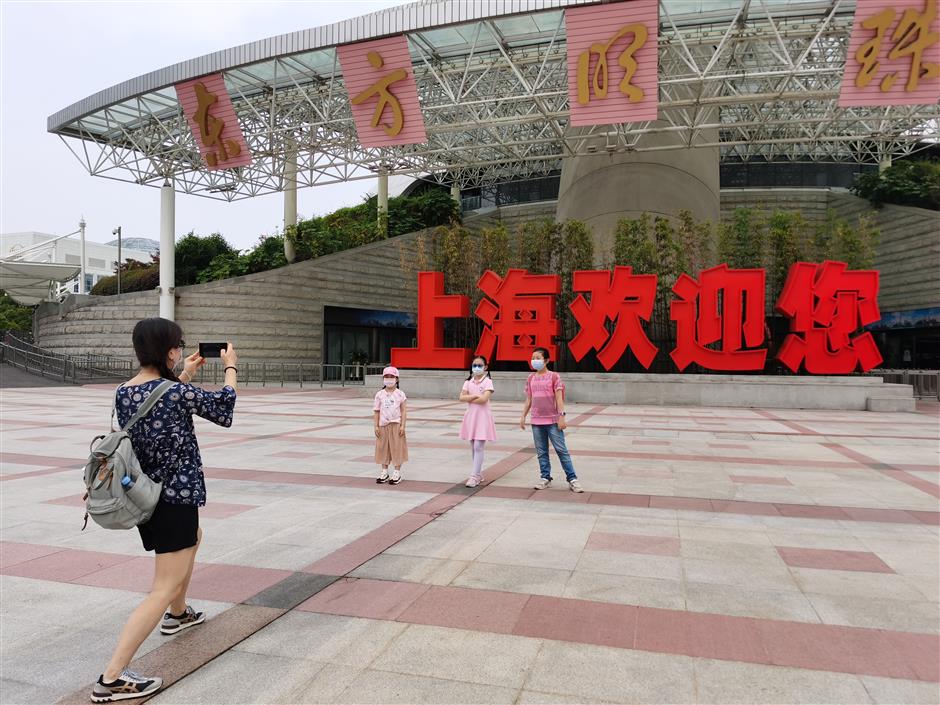 One, two, three! Kids pose for photos at the square of the Oriental Pearl TV Tower on Wednesday. 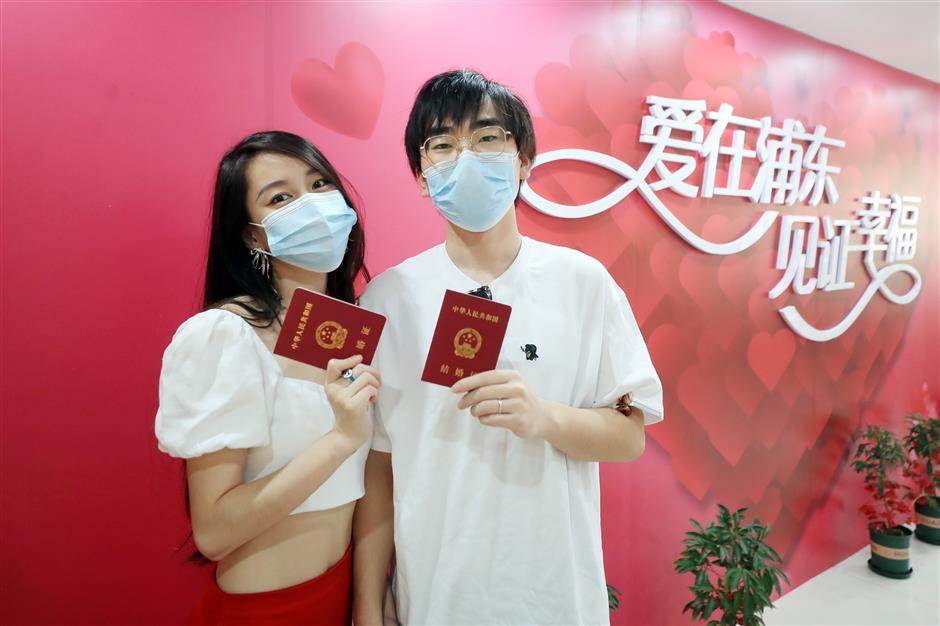 We are married! A couple shows marriage certificate at the Pudong New Area Marriage Registration Center on Wednesday. 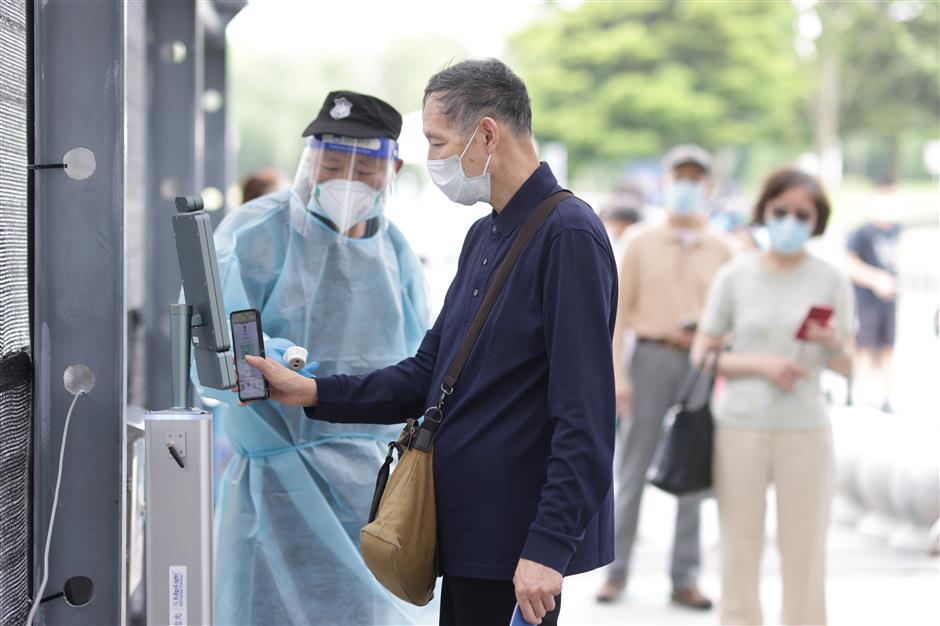 A man scans a device for entry into the Chenshan Botanical Garden on Wednesday.

Shanghai started coming alive again on Wednesday, from lovebirds rushing to marriage registration centers to say "I do" to families leisurely taking a stroll at reopened city parks and attractions.

Lovebirds celebrated the lift of lockdown in a romantic and once-in-a-lifetime way – exchanging their vows at reopened marriage registration centers.

A total of 308 couples tied the knot across Shanghai on Wednesday, with three couples divorcing on the day, according to the Shanghai Civil Affairs Bureau.

Wearing a wedding veil and lovely Mickey Mouse headwear, Iris Liu and her boyfriend rushed to the Minhang District Marriage Registration Center on early Wednesday morning to tie the knot.

"We haven't seen each other for two months due to the lockdown," said Liu.

"We feel like celebrating Children's Day at the civil affairs bureau and are in a festive mood," Liu joked with a brilliant smile.

"At midnight, firecrackers were set off as people celebrated the end of lockdown, which is like celebrating our big moment," she added.

"I was too excited to fall asleep last night, and I got up at 5am," said another bridegroom surnamed Yang who got a marriage certificate at the center on Wednesday morning.

He held his wife's hand tightly all the time. His bride is a nurse and worked at the front line in the fight against the COVID-19 resurgence.

They had not seen each other for three months and kept in contact via WeChat.

"I was too excited about the moment, which is dreamlike," said Yang.

"We love the day because it is an ingenuous and happy festival and it is more memorable now due to the end of lockdown.

"We are lucky to tie the knot on the day, and we did not expect the marriage registration center to reopen today," he added.

They arrived at the center at 8am, one hour before it even opened.

"During the COVID-19 resurgence, I was worried about my girlfriend as she was busy in the fight against the pandemic, and now, it's time to take care of her for the rest of our life." 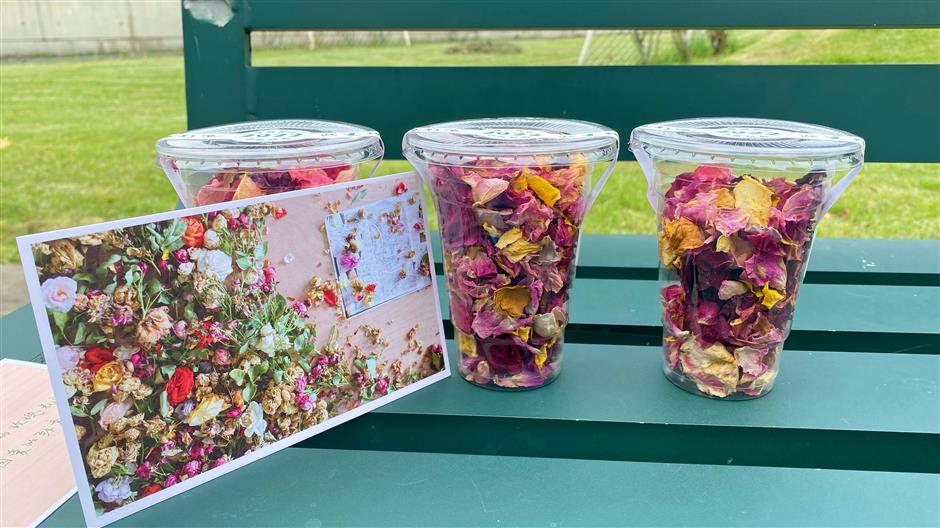 The Chenshan Botanical Garden prepared a special gift of dried petals for visitors on Wednesday. 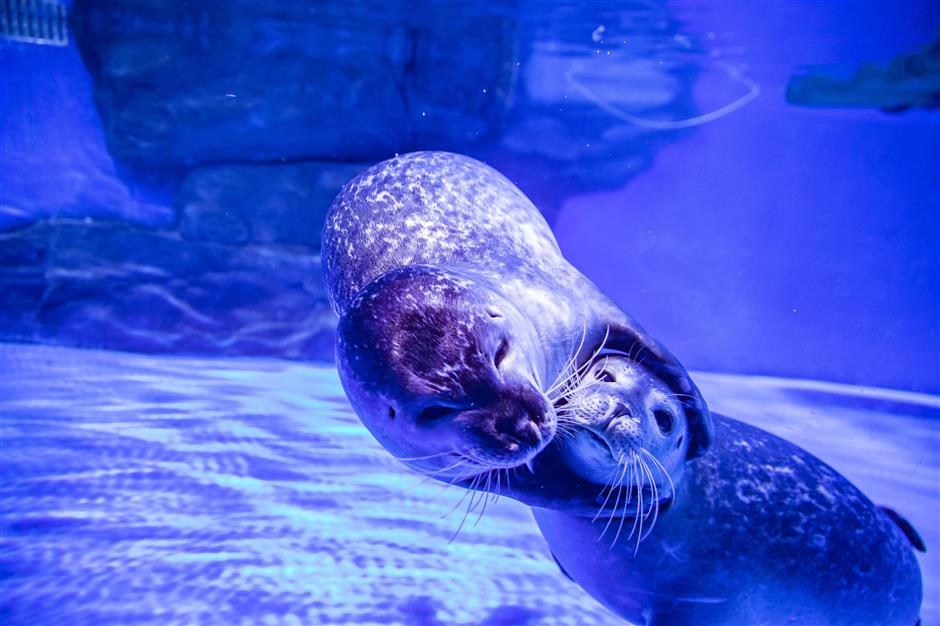 Seals at the Haichang Ocean Park.

"The normal scene is back," said Shen Xuanlei, director of the center.

"When we contacted couples giving them tips for their visits, we felt their expectation and joy on the phone," she said.

Reservation is mandatory for lovebirds and disinfection is conducted after each couple leaves the service window, Shen said.

The two marriage certificate halls of the center remain closed and people accompanying couples are banned from entry as precautions against COVID-19.

"We have witnessed a huge demand from city residents to get marriage certificates after we resumed services and for some auspicious dates such as the 6th, 16th and 18th this month, the reservation slots are almost full already," said Shen.

"We may increase the number of slots based on the pandemic prevention and control situation to satisfy the growing demand." 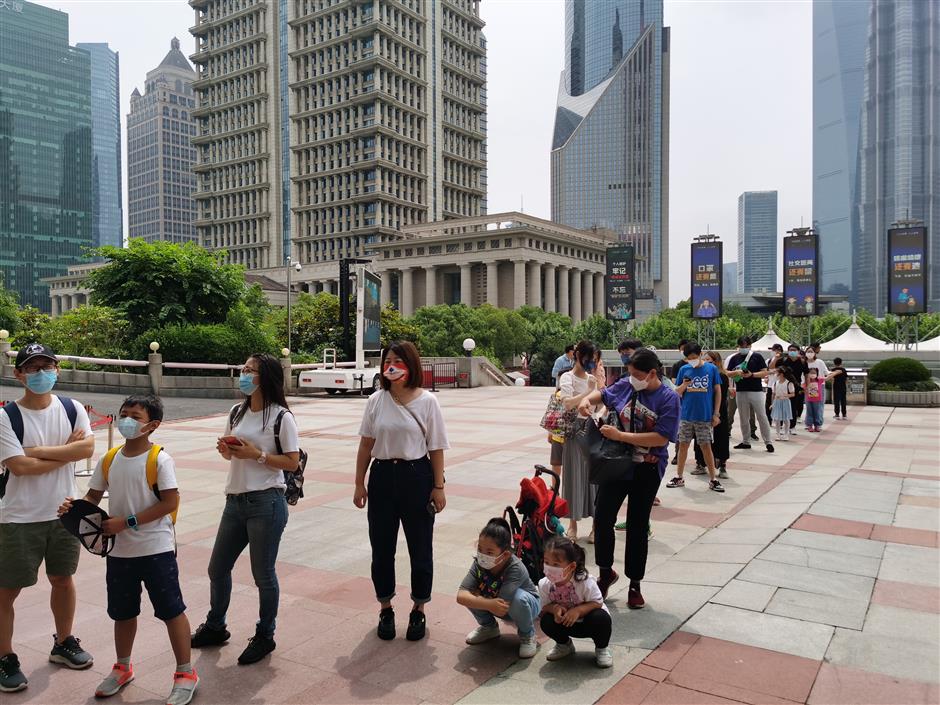 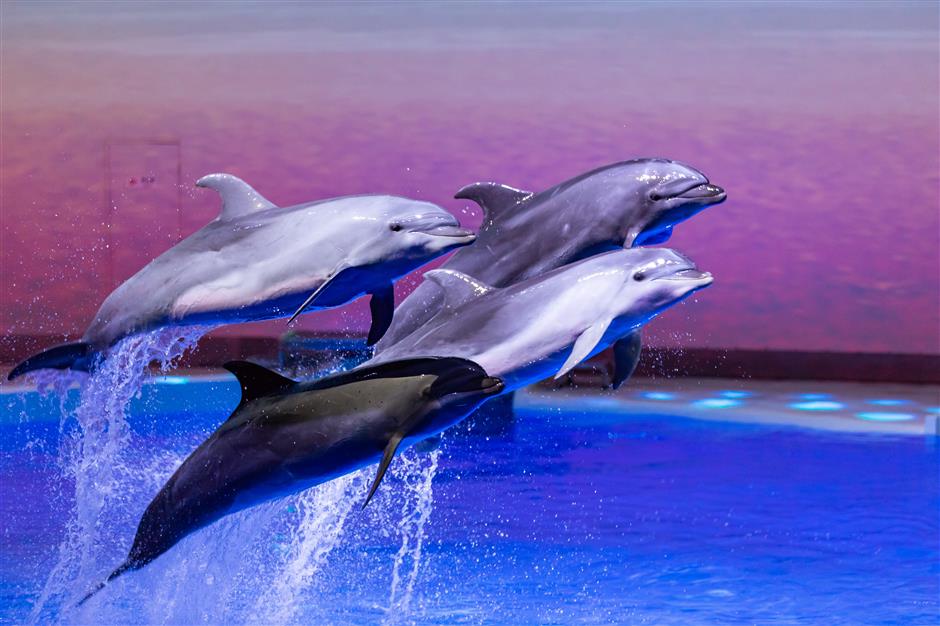 Dolphins at the Haichang Ocean Park.

At the Chenshan Botanical Garden in Songjiang District, quite a number of residents took their children there to celebrate Wednesday's International Children's Day.

"My daughter was excited since yesterday and we hope to breathe the fresh air and enjoy the city's beauty on the special day," said a resident surnamed Ding.

They drove one hour to the garden.

"It is awesome to embrace nature again," said Ding.

The garden prepared a special gift – a cup of dried flower petals – for visitors.

"We collected some rose flower petals which were in full bloom, and we want to convey a message of love to our visitors," said Hu Yonghong, director of the garden.

"The gift also symbolizes spring, and we keep spring in the garden for our visitors," he added.

When visitors open the cup, the fragrance lingers in the air.

As of 7am, 4,300 people had made reservations to enter the garden on Wednesday, the first day of its reopening.

The Binjiang Forest Park in the Pudong New Area expected 10,000 visits on Wednesday.

In total, 131 parks in Shanghai reopened on Wednesday, bringing the total number of reopened parks to 267. 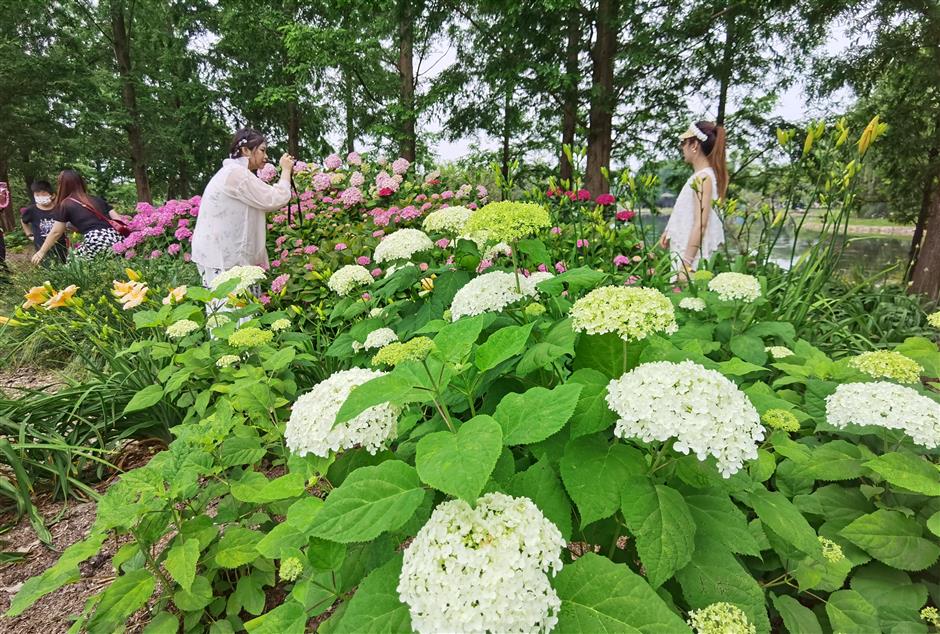 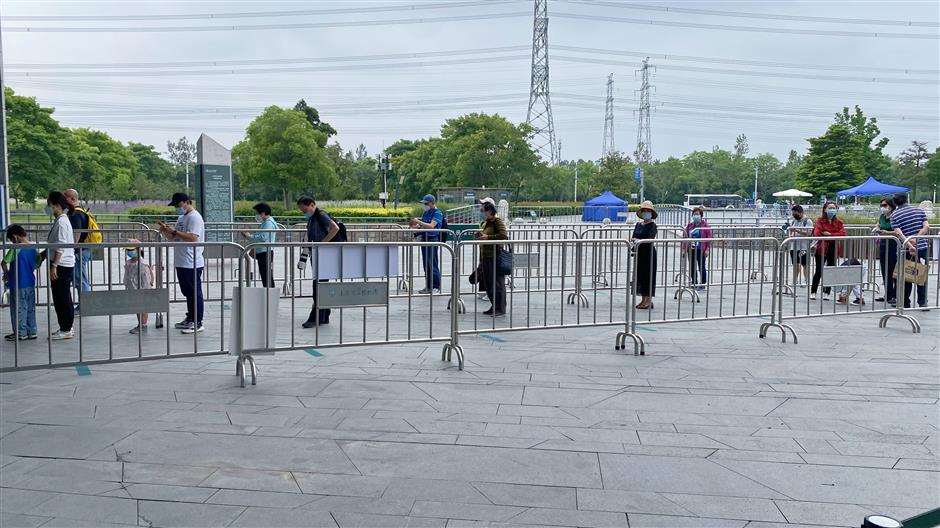 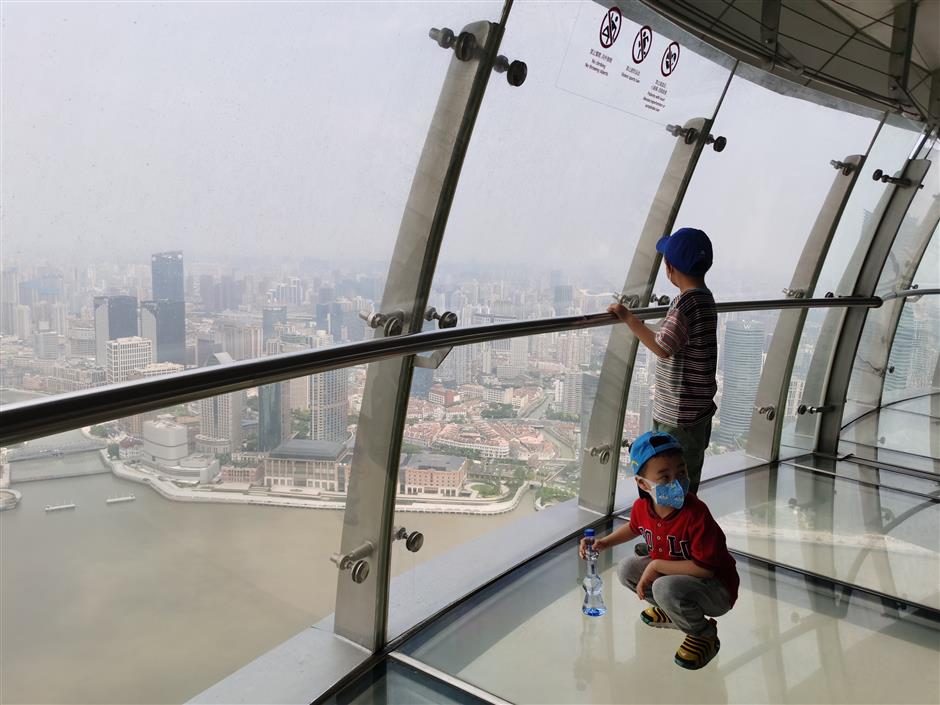 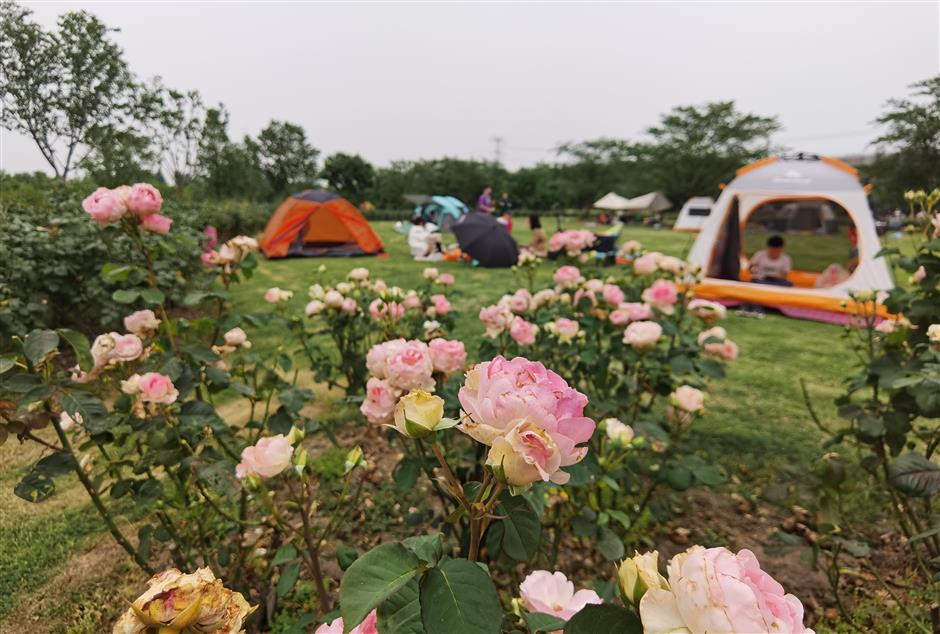 The Shanghai Haichang Ocean Park is scheduled to reopen on Friday. Between Friday and June 10, it will offer free admission, with a cap of 5,000 visitors daily.

The landmark Shanghai Oriental Pearl TV Tower began operating from 10am to 8pm from Wednesday, with a negative nucleic acid test result within the previous 72 hours required to gain entry.

Real-name reservation is mandatory and visitors are also required to have their health condition verified via a device called the "digital sentry" before entering the popular site.

Tourist attractions enabling people to get close to nature are the most popular, Shanghai-based online travel operator Trip.com said.

Traffic on the platform with "Shanghai" as the destination soared 132 percent from the same time last week after the city announced that some cultural and tourist attractions will be reopened from Wednesday.