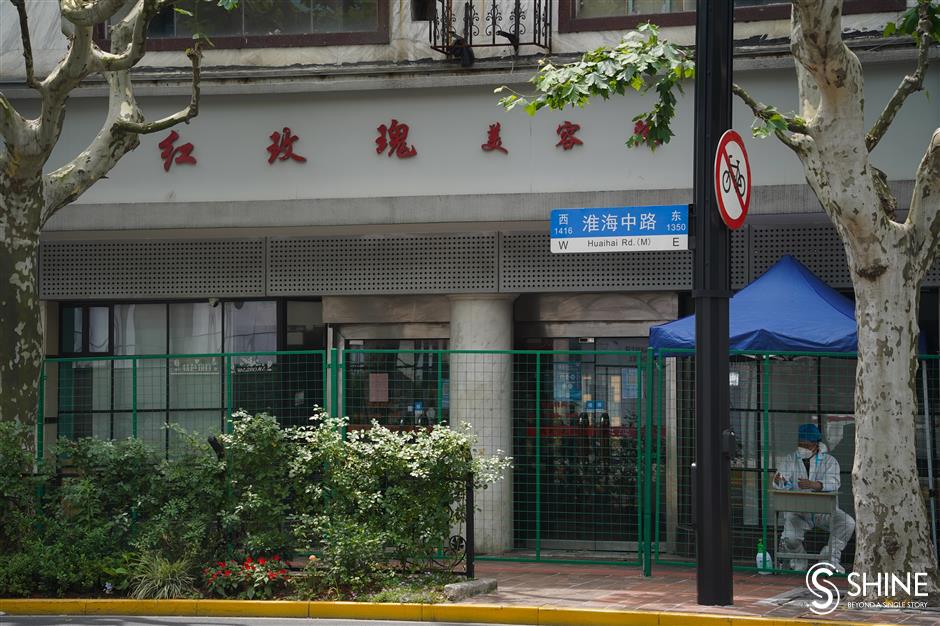 Shanghai reported six community COVID-19 cases on Thursday, including three staff at a downtown hair salon which had served more than 400 customers since it reopened on June 1.

The city declared four more areas in downtown as medium-risk spots. A massive polymerase chain reaction (PCR) screening will be launched in seven districts over the weekend, with temporary lockdown measures in place during the sample collection, according to the Shanghai Health Commission.

Scattered community infections have been detected continuously since June 1, when the city lifted the two-month-long lockdown, mainly at some old residential compounds and service venues in downtown, Zhao Dandan, deputy director of the commission, revealed.

"The new infections in the hair salon remind us that risks still exist in public places, while service businesses must have their employees go through self-disciplined health management," he told the city's COVID-19 press briefing.

Red Rose Beauty Parlor on 1352 Huaihai Road M. in Xuhui District has 16 employees. A total of 481 customers have been traced since it restored operations on June 1. They've all been put under quarantine.

According to a preliminary investigation, some employees failed to take daily PCR test as is mandatory. They will face strict punishment according to the result of the ongoing investigation, Wang Hongwei, deputy director of Xuhui, suggested. 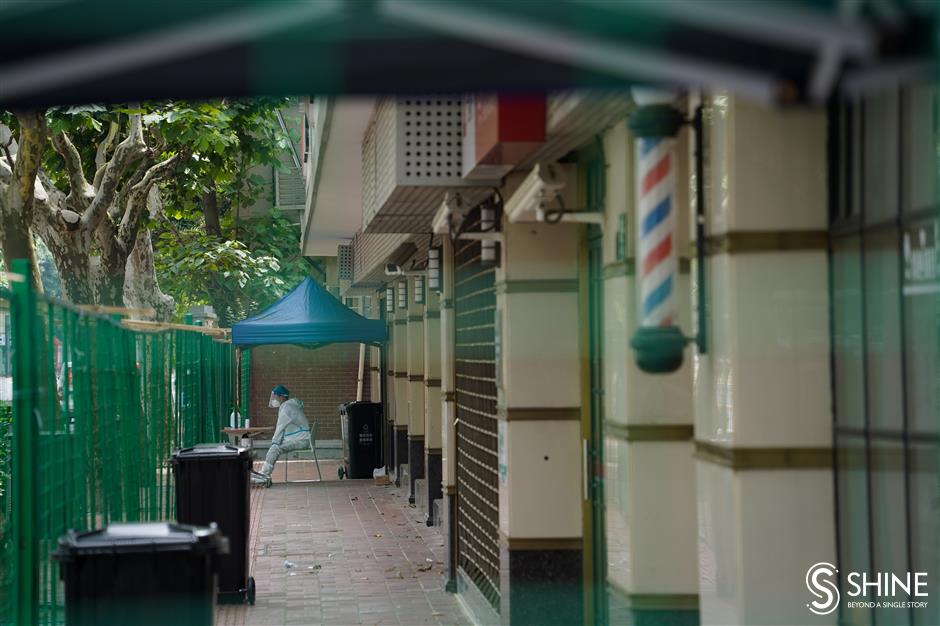 A quarantine staff in hazmat suit sits in front of the hair salon. 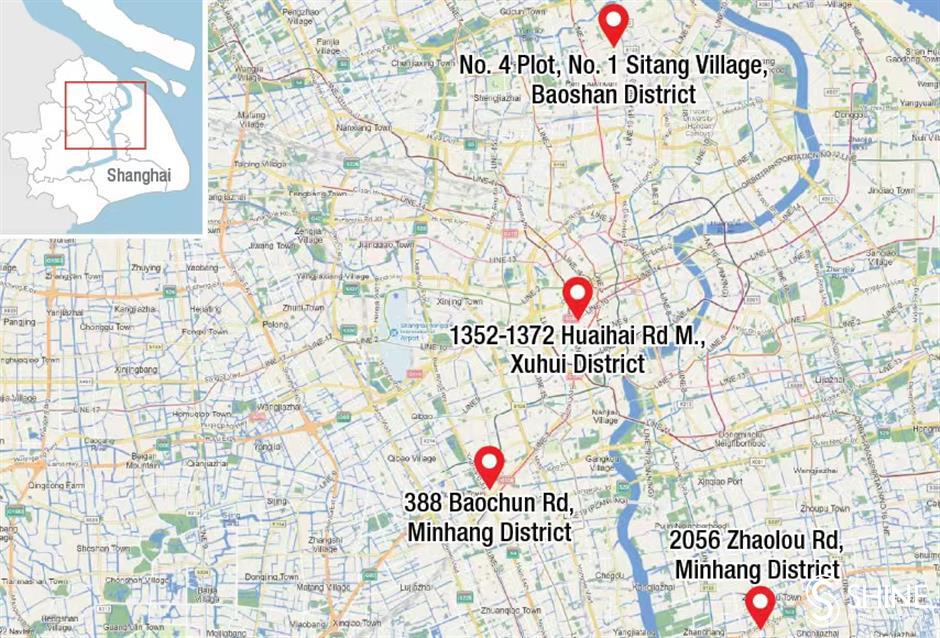 The salon reopened on June 1 after the city lifted the COVID-19 lockdown. Customers are required to scan the venue code, show their health code and a 72-hour negative PCR test report before entering the store. Hairdressers are supposed to disinfect the tools and seats after serving every customer, Wang pointed out.

The state-owned hair salon was established in early last century and was one of the most popular beauty salons in the city in the 1980s. In its heyday, it had over 60 outlets, which were gradually shut down amid fierce market competition since the reforms and opening up.

The store on Huaihai Road M. is the last remaining outlet of the time-honored brand. It mainly attracts middle-aged customers with its traditional skills, old-school facilities and senior hairdressers.

The three infections at the beauty salon include a 48-year-old male resident of Zhuanqiao Town of Minhang District and a 58-year-old man who lives in Minhang's Pujiang Town. They were diagnosed as confirmed COVID-19 cases with mild symptoms.

The other positive staff, an asymptomatic case, is a 39-year-old woman who lives in Longhua Subdistrict of Xuhui.

They had tested negative in multiple PCR tests between May 25 and June 6, but returned abnormal results during subsequent PCR tests.

Apart from the beauty salon, the trio had been to a supermarket, a convenience store, a China Mobile service outlet, a drugstore and a bank in Minhang, as well as a shopping mall in Xuhui over the last two weeks.

All of their 655 close contacts have received PCR screening, with 427 of them testing negative while other samples are being tested. A total of 242,398 related people are also undergoing PCR screening. 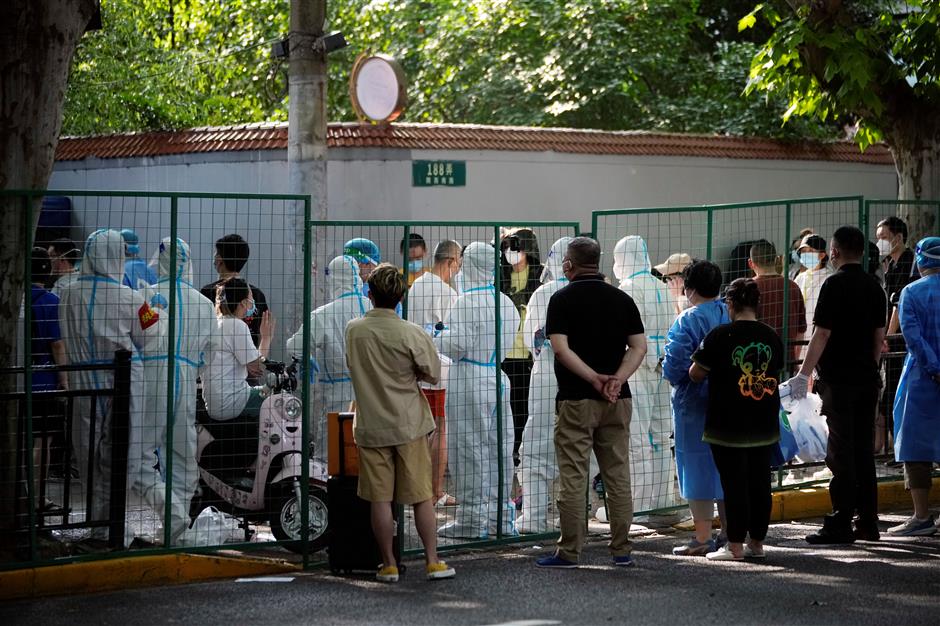 A community in Jing'an District is put under lockdown again.

Among the 2,718 environmental samples, 20 samples collected from the beauty salon and an infected case's home returned positive.

The beauty salon and its adjacent buildings from 1352 to 1372 Huaihai Road M. have become a medium-risk area, along with the residential compounds of some of the new infections. They bring the total to 25 such areas in the city.

These areas had reported multiple positive cases and had many densely populated old residential communities with shared kitchen and bathrooms, the health commission official noted.

Residents in these places are undergoing two or seven days of home quarantine plus one to two weeks of self-health management, based on epidemiological investigation and risk evaluation. They must also take multiple nucleic acid, or PCR, tests during the quarantine period.

Shanghai has reported more than 20 community infections since June 1. The cases have been found in Jing'an, Huangpu, Xuhui, Hongkou, Baoshan and Minhang districts as well as the Pudong New Area, where the massive PCR screening will be launched at the weekend. 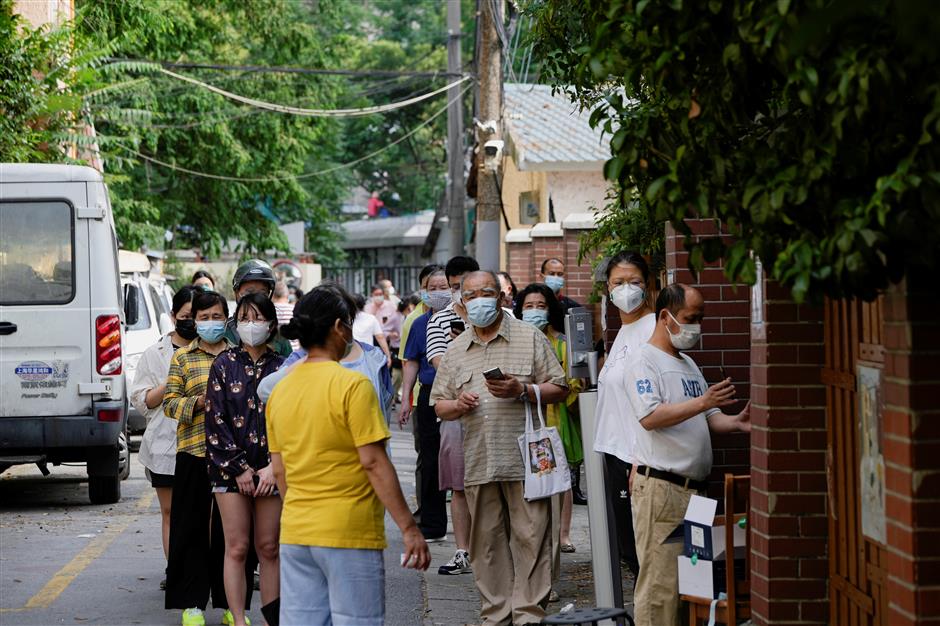 Residents line up for PCR test in a local community.

Five confirmed cases and an asymptomatic cases were found in Minhang, Xuhui and Baoshan districts on Thursday.