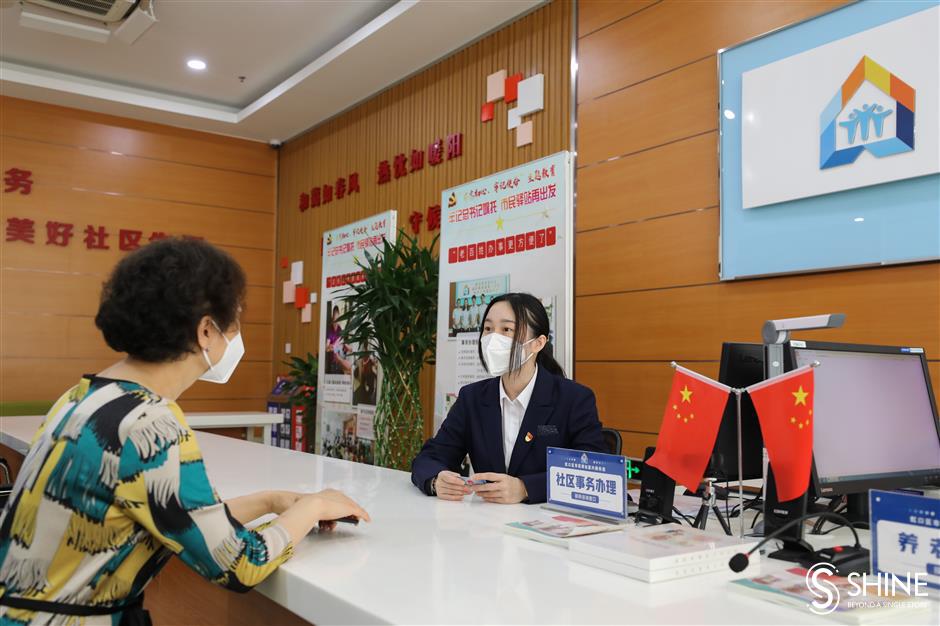 A staff member serves a resident at a community service center in Hongkou District.

For her mastery of numerous high-tech gadgets, retired teacher Xia Juanjuan is dubbed "tech-savvy" by her peers at a senior daycare center in Shanghai's Hongkou District.

The 85-year-old retired elementary school teacher demonstrates how to recite and enjoy traditional Chinese poetry to other senior citizens.

She also taught them how to use electronic bracelets to monitor their heartbeats and health conditions.

Rather than seeking medical assistance, Xia encouraged others to monitor and anticipate their health conditions by standing in front of a "magic mirror" every morning.

"I feel like keeping pace with the current trend in the city," Xia stated. The center's innovative senior care equipment and services have recently been updated.

The senior care services and garbage-sorting campaign in Hongkou have seen substantial progress after President Xi Jinping visited the center in 2018 and offered guidance.

"It is our common wish that elderly people live happy, healthy and long lives," the president said during the visit, emphasizing the need for more individuals to benefit from elderly care policies.

In China, daycare is not just for the young. It serves both ends of the age spectrum. Senior daycare centers are a blessing for the elderly who have working children or do not have in-home care, and keep them away from nursing homes.

The center Xi visited has become a model for how aged care should be delivered. It provides a comprehensive range of activities, entertainment and recovery therapies to the elderly with dignity and warmth. 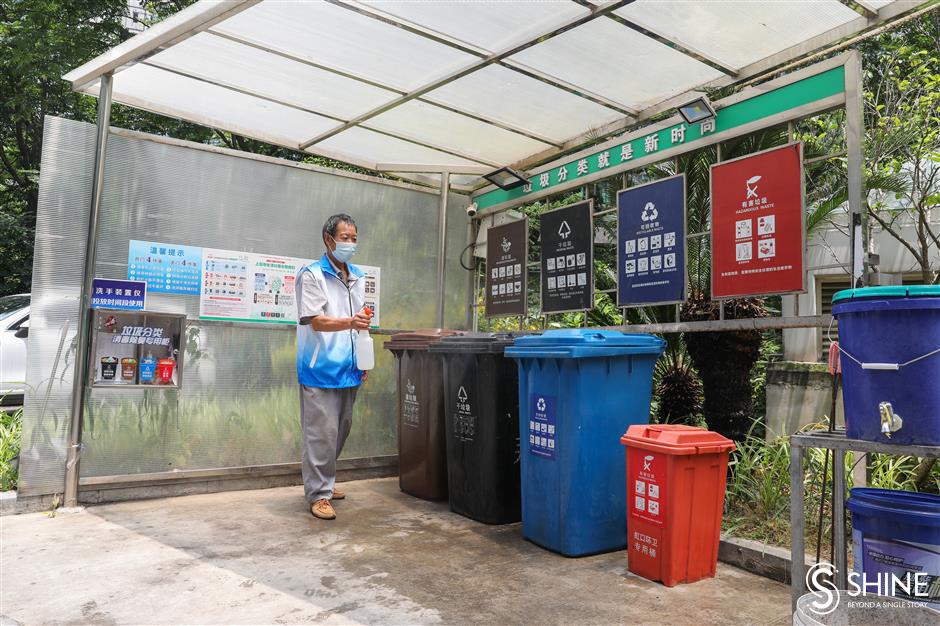 A volunteer disinfects a garbage-sorting site at a Hongkou community.

"We stay at the center between 8:30am and 4pm every day." Xia said. "We play games, enjoy traditional operas, visit neighbors, have lunch and even see a doctor."

Shanghai's elderly population expanded to 5.8 million by the end of 2021, accounting for 16 percent of the city's total, thanks to the 1950s baby boom. Hongkou is one of the local districts with the largest proportion of senior citizens.

According to Wang Qing, head of the district's senior care service center, the district hopes to have such elderly service facilities within a 15-minute walk of each citizen.

As a demonstration site, the center in Jiaxing Subdistrict is located next to a community health clinic staffed by three general practitioners and a traditional Chinese medicine doctor.

Along with the facility, there is a communal canteen where the elderly can get reasonable meals in a friendly setting. Because of government subsidies, lunch is significantly less expensive than surrounding eateries.

Wang said the district has used a variety of smart technologies to make the senior care centers both modern and nurturing.

For example, each senior can choose a rhythm instrument and follow the beat of the song during music therapy sessions. Aromatherapy is another session that allows the elderly to smell different plants like lemongrass to help them relax. There are also classes in weaving, handicrafts, painting, calligraphy, poetry, singing and dancing as well.

More proficient seniors can play pool or table tennis. Loneliness is alleviated with the help of psychological specialists.

Lei Guoxin, former Party secretary of the Xingang residential community who accompanied President Xi on his tour, has witnessed the area's dramatic changes, which include a huge number of elderly people.

Lei, who is now the head of such a service center in Hongkou, said the number of services available at the community service center has expanded to over 200 from 180 previously, with over 80 issues that can be resolved instantly.

"More daycare centers for the elderly and children have been developed, along with community canteens and service stations," she said. 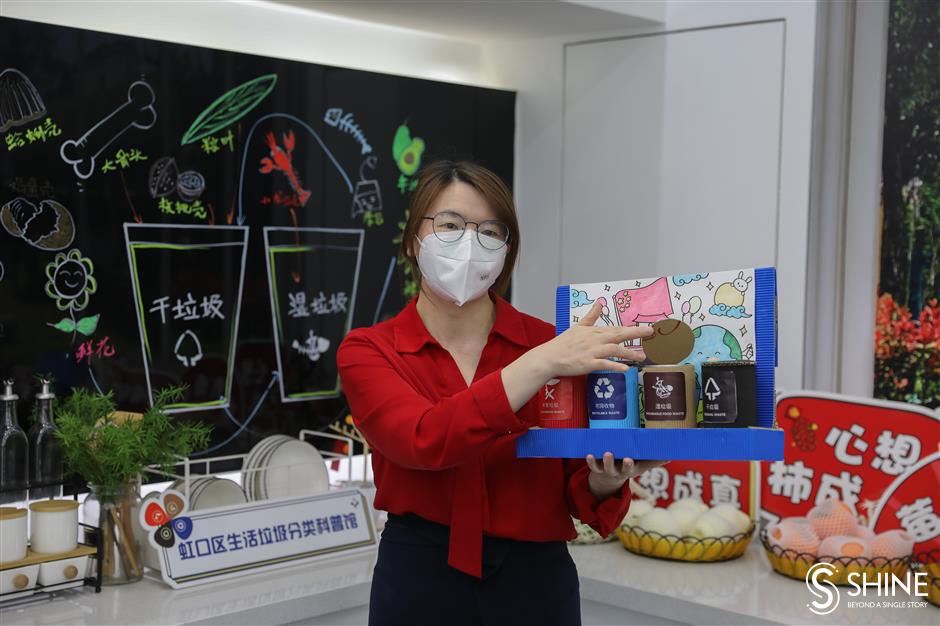 A staff member explains garbage-sorting rules at a museum in Hongkou.

"Garbage sorting is a new fashion," President Xi declared during his visit to Hongkou. On July 1, 2019, the city's garbage-sorting regulations took effect.

In the first of this year, about 10,000 tons of wet garbage were separated daily on average, up 89 percent over the same period last year.

Hu Ye, an official with the district's vegetation and public sanitation bureau, said the campaign is being executed more thoroughly in Hongkou, following the president's guidance.

The bureau has removed over 1,700 garbage bins and trash disposal boxes from the street to push individuals to develop a waste-sorting habit. Over 3,000 garbage bins were also removed from each level of the highrise buildings.

In early 2022, Hongkou generated an average of 363 tons of residential waste per day, down more than 40 percent from the previous year.

In the meantime, every day, over 293 tons of kitchen waste were sorted, quadrupling the amount sorted four years prior. According to Hu, the volume of recyclable rubbish has increased three times since last year.

Due to the COVID-19 reappearance, garbage-disposal rooms in a neighborhood near the North Bund were cleansed on a regular basis. Community employees would collect trash from the doors of people who were forced into quarantine.

A special feature is that all garbage rooms in Jiaxing Subdistrict are now monitored by an AI system.

Any violations will be automatically reported to the subdistrict's command center, which then issues warnings to the violators or dispatches personnel to the scene.

The district has also built a small museum on waste-sorting knowledge at 842 Tianbao Road. It has reopened to the public after being closed during the COVID-19 outbreak. 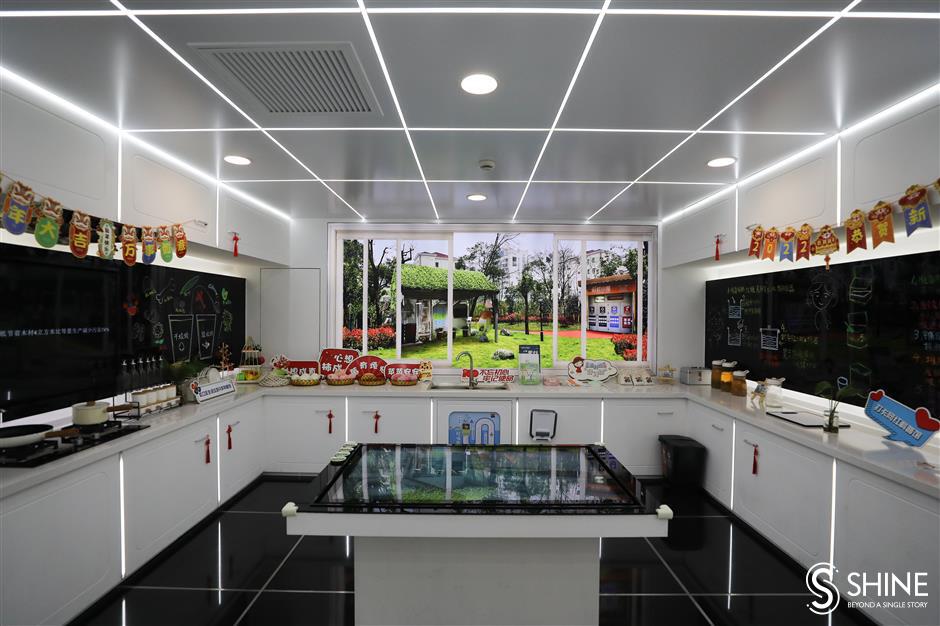 The garbage-sorting museum in Hongkou.