Your voices heard: Grassroots liaison in lawmaking proves its value 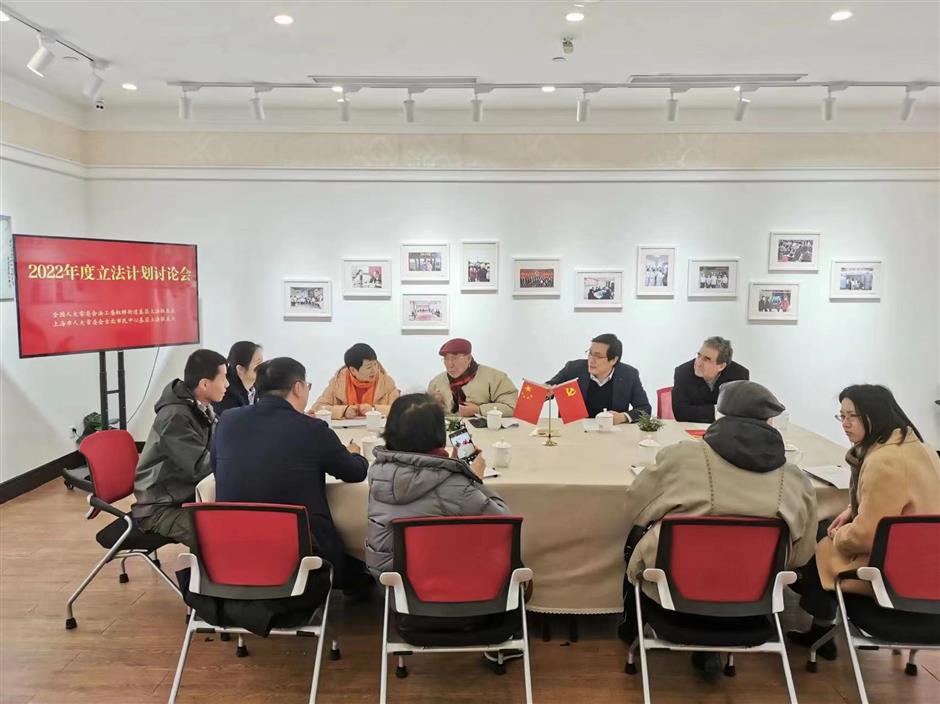 Shanghai's legislative plan for 2022 is discussed during a meeting at Gubei Civic Center in Changning District in February this year.

A new approach to the legislation process in China that gives more voice to ordinary citizens will celebrate its seventh anniversary next month.

Resulting from a decision by the CPC Central Committee in 2014, grassroots liaison points on legislative matters were established in 2015 to collect people's suggestions on various draft laws.

The initiative became a complementary process to the statutory procedure of public opinion soliciting in China. The grassroots opinions it generated were considered to come directly from people believed to be key stakeholders in the effects of the relevant draft laws.

Over the years, the grassroots process has generated laws of higher quality, raised public awareness of the rule of law and led to greater community satisfaction about its contribution to building a democracy, said two Shanghai residents who closely followed its development.

Wu Xinhui, director of Shanghai Kangming Law Firm and a lawyer with 12 years' experience, has been a legislative suggestion collector at the liaison point at Gubei Civic Center in Changning District since July 2015.

The newly revised Civil Procedure Law, which came into force on January 1 this year, is the latest example to showcase the effectiveness of the new mechanism, Wu said.

"A suggestion from the public about ensuring the equal application of civil litigation on Internet matters was adopted. This has become relevant during the COVID-19 lockdown when courts were not open," she said.

Also, the Civil Code of China, which took effect last year, included a suggestion from Wu's liaison point about enabling adults with full civil capacity to designate legal guardians to handle their affairs when they have partially or fully lost their civil capacity.

Wu said the suggestion first came from a senior citizen who hoped to be able to designate such a legal guardian when he was fully conscious of his decisions.

Wu, who has been a legal consultant to communities in Changning District for many years, said law professionals have joined the consultative process to contribute their knowledge.

"Suggestions collected from the public would often be subject to discussions by lawyers, law professors and law enforcers, and sometimes brilliant suggestions were born when people requested us lawyers to explain some stipulations they didn't understand," she said.

Apart from soliciting suggestions from people on specific objectives, Wu said she and her suggestion collectors also proactively sought ideas, after spotting needs, about potential revisions to existing laws.

Wu is motivated to take part in the legislation process also for her own daily job. "Being involved in the law formation process helps me understand the gist of the stipulations better," she said.

Legislative advice collector Zhu Guoping, also a deputy from Shanghai to the current National People's Congress, said the new mechanism has changed many people's perception of the law because legislation is no longer seen as a job reserved for "professionals."

"Law was often considered to be something to resort to only when woes happen and something to avoid if one wants to 'save face' for himself and for others too," said Zhu, who retired a few years ago after working in local residential committees, juweihui, for over three decades.

"But now people increasingly see that it's something important that could protect them," she said.

Zhu herself contributed a suggestion to the Civil Code from her own work experience.

Previously, a child temporarily left without a legal guardian was often recommended by law enforcers to be taken care of by juweihui, but these were short of the necessary resources to shoulder a responsibility that was never legally defined.

Zhu suggested that, under such circumstances, responsibilities for the child be taken over by civil affairs administrators. This idea was adopted and made into law.

Over the past few years, more methods to collect legislative suggestions have been introduced, in addition to the common roundtables and in-person visits to stakeholders. Sub-liaison points have been established in local communities and office buildings as well as Internet portals to enable people to more easily contribute suggestions.

Last year in Shanghai, a total of 3,103 suggestions on 27 local draft laws being considered by the standing committee of Shanghai People's Congress were collected from 25 liaison points, according to the committee, of which 354 were eventually made into law.

The numbers represented a significant rise from 2020, when 1,550 suggestions were collected and 236 were adopted.

As for the suggestions that were not adopted, lawyer Wu told Shanghai Daily it's generally understood that not all suggestions will be written into law, despite people's well meaning.

"To those whose suggestions were not taken and who sought an explanation, we would give our opinion," she said.