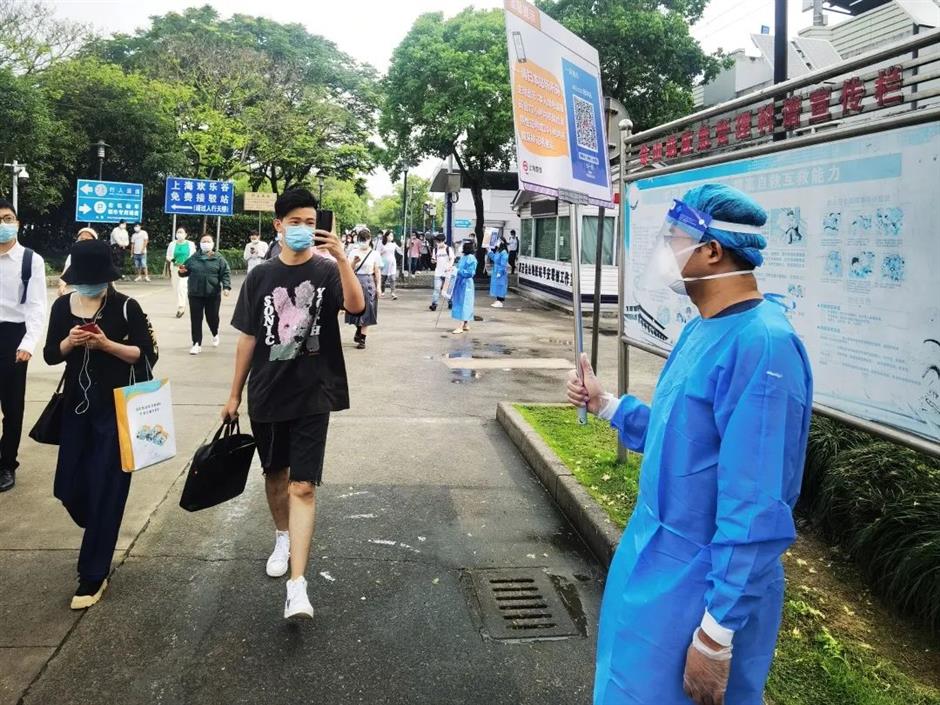 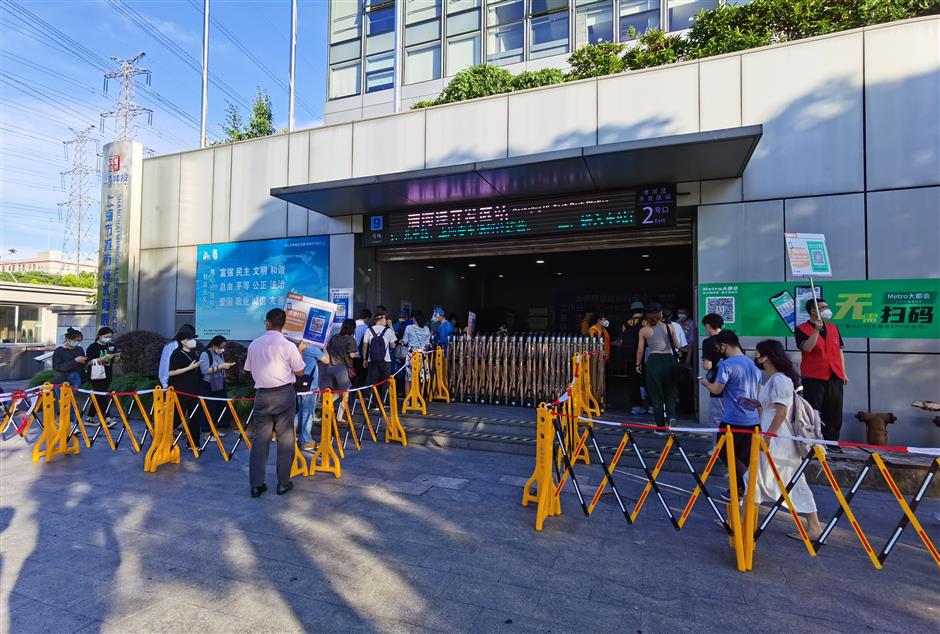 Passengers who enter the Caohejing Hi-Tech Park Station on Metro Line 9 from Exit 2 are now divided into those who use the "Metro daduhui" app and those who don't and thus have to scan the venue code.

The sea of umbrellas outside Sheshan Metro Station in suburban Songjiang District on a rainy Monday of June 13 sparked worries among commuters about the efficiency of subway travel as the city returns from a COVID-19 lockdown. But those fears now seem from a long way back.

The Metro operator and the police have been addressing the problem with concerted efforts, and local travellers, gradually getting used to new pandemic rules in the subway, are also playing their part.

At Sheshan Station, just the next morning, passengers entering the station were divided into four queues instead of two, which enabled them to enter the station more quickly, and more venue code posters and extra staff to verify people's codes were found along their way into the station.

About 14,000 people took trains from the station from 7am to 9am that day, 2,000 more than the previous day, according to Shanghai Metro, but the train riding experience was made significantly smoother.

In Putuo District, Xincun Road Station on Metro Line 7, which is surrounded by many residential complexes, is another busy terminal.

Xu Fang, a staff at the station, said the passenger volume has been restored to about 70 percent of the pre-lockdown level, and more staff have been assigned to help commuters get in the station during morning rush hours.

Just as at Sheshan Station, at all exits to the station, staff hold venue codes to help people scan before they reach the security check spot, and there are more roll-up screens, recommending an efficient way to take trains – using the Metro's official app "Metro daduhui."

"We're now less busy than earlier this month since passengers are getting used to the Metro's pandemic control measures," Xu said.

In Xuhui District, where currently more then 40,000 people arrive and depart from the Caohejing Hi-Tech Park Station on Metro Line 9 daily, commuters sometimes used to queue up for 500 meters outside the station, the district police said.

Following consultations between the Metro operator and the subdistrict government, now passengers who enter the station from Exit 2 are divided into those who use the "Metro daduhui" app and those who don't and thus have to scan the venue code, which has greatly reduced the lines.

Police have also stepped up efforts to encourage the use of the Metro app among office workers in the area. As a result, there are much shorter queues at the station during the evening rush hours.