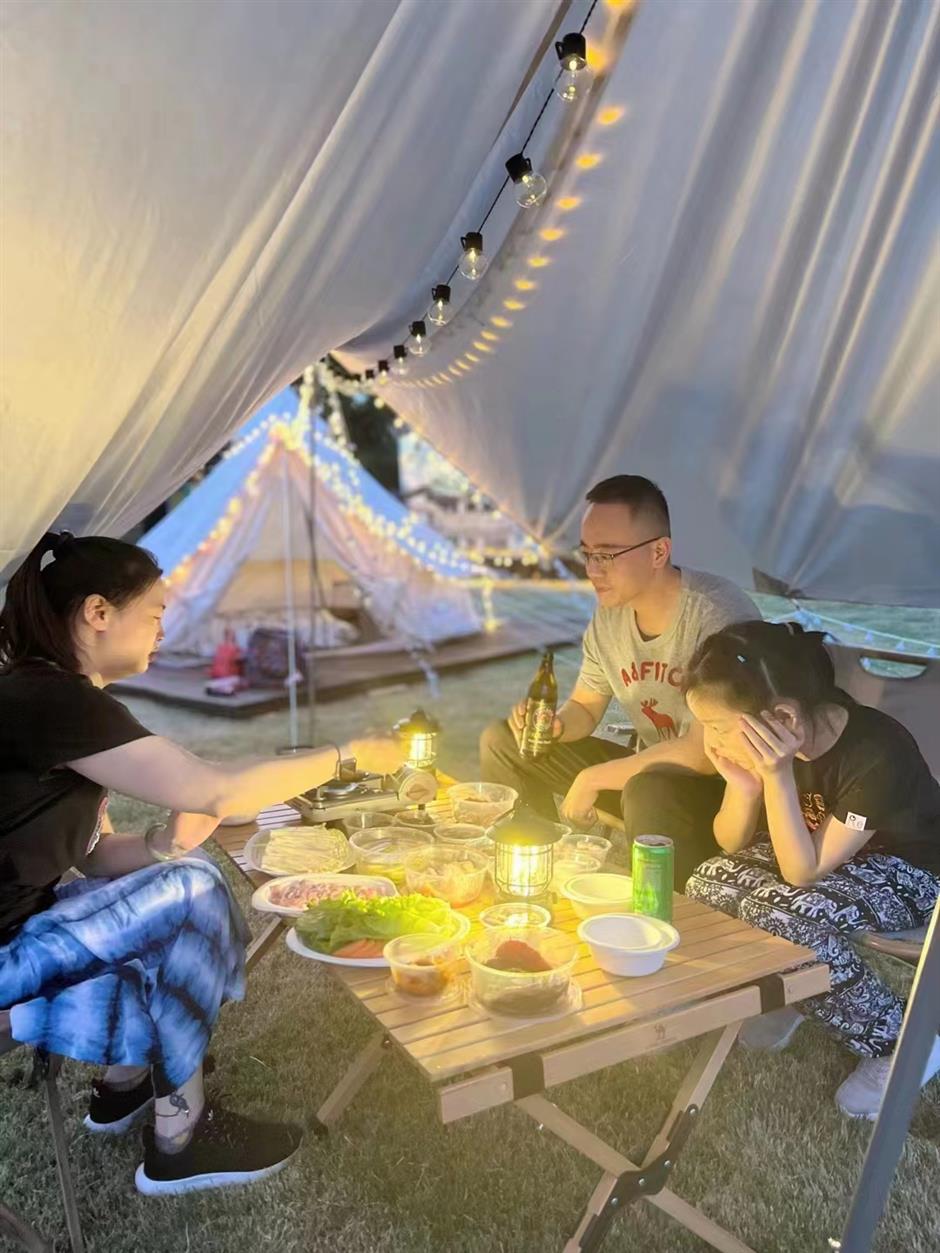 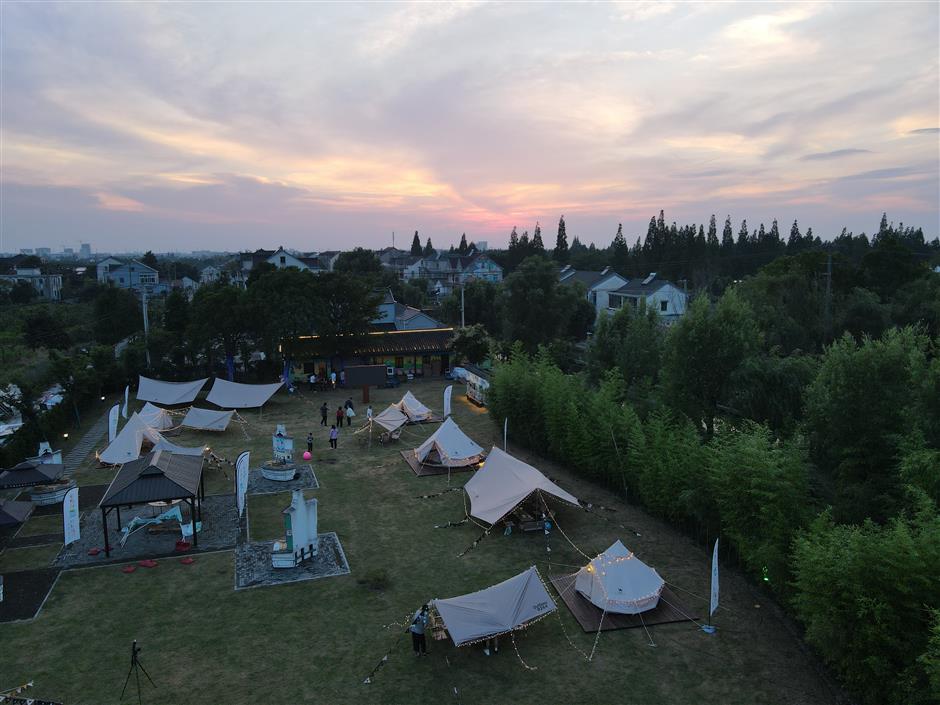 The scorching summer heat has failed to deter people's travel fever disrupted by the COVID-19 resurgence, and tourism is showing signs of a robust recovery as the pandemic wanes in Shanghai.

Shanghai resident Cece Li's trip with her 8-year-old son over the weekend was much closer to home – Fengjing Town in suburban Jinshan District.

But Li and her son were more excited than ever.

"We have not made a single trip for three months due to the lockdown, and it feels super good to be able to travel again," said Li.

The camping trip lasted two days, including visit to Jinshan's renowned farmer paintings, tasting a BBQ banquet, celebrating nightfall with a bonfire party and, more importantly, enjoying the fun to be free to travel again.

"We really enjoyed the journey and my son proudly told others he was the first student in his class who made a trip again," said Li. "He was super excited." 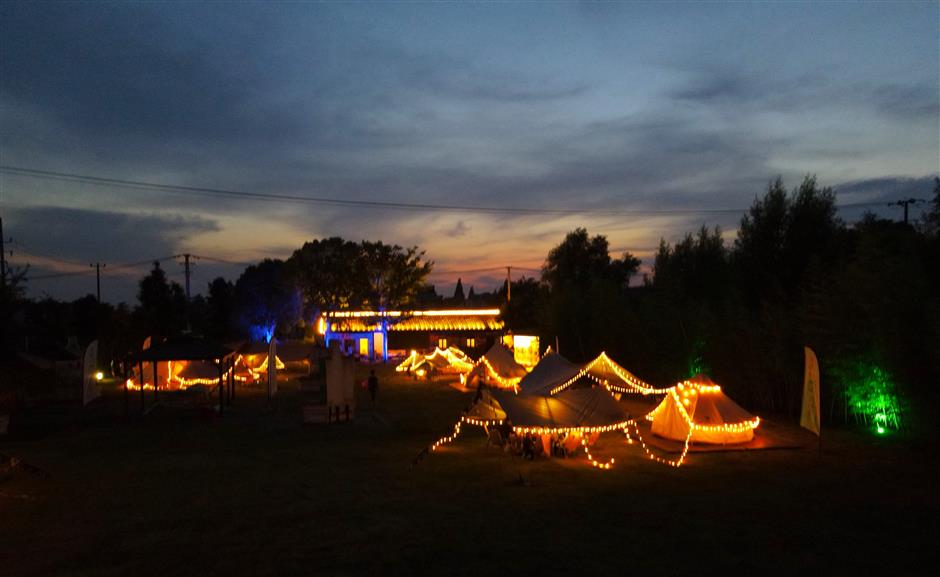 Camps in Jinshan illuminated at night.

At the same time, a Boeing 787 carrying 265 passengers was flying from Shanghai to Sanya, a resort city on the southern island province of Hainan. There was not a single empty seat on board.

After Sanya eased COVID-19 quarantine rules for travelers from Shanghai, Shanghainese flocked to the city to enjoy sunshine, beaches and seafood despite the sizzling weather.

But traveling again is not cheap. Shanghai resident Tang Yiling paid 15,738 yuan (US$2,350) for a business-class ticket because economy had sold out.

"It was still worth it, as Sanya is among the few travel destinations that don't require quarantine for travelers from Shanghai," she said.

Tourists from Shanghai except for Baoshan, Jing'an and Putuo districts only need to take a nucleic acid test upon arrival in Sanya and show their green health QR code at the same time.

Accommodation costs at luxury hotels in Sanya have surged due to the travel craze of Shanghai residents, and the Shanghai dialect was heard everywhere in the city from restaurants to hotels, said Tang. 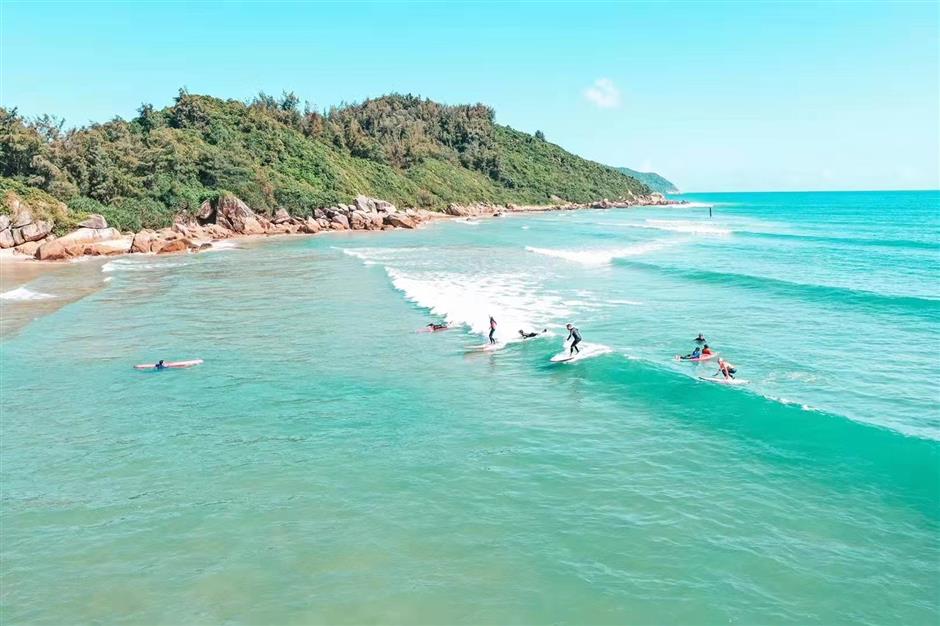 Sanya has recently attracted a large number of travelers from Shanghai due to its relaxed quarantine policy.

By 8pm on Monday, searches for Hainan surged 47 percent from a day earlier, according to Trip.com.

Among those booking air tickets to Hainan on June 25 and 26, the departure date of nearly 70 percent was within three days, the online travel operator said.

When Shanghai Spring Tour announced a group tour to the Gannan Tibetan Autonomous Prefecture in northwest China's Gansu Province on Friday, it was sold out overnight.

Then the travel agency launched another seven-day group tour with similar route targeting shutterbugs scheduled for July 4, and it was also sold out within hours.

Shanghai itself is benefiting from the travel boom, with people packing tourist attractions and minsu (Chinese B&Bs) in some suburban districts.

In Chongming District, some minsu had all rooms reserved over the weekend and the situation was the same on some working days.

"I was too busy these days, from checking nucleic acid test results of guests to arranging meals for them and answering inquiries all day long," said an employee surnamed Shi at the Yiyi Minsu on Chongming Island. It has 10 rooms and most of its guests were families.

Its average occupancy rate in June equaled that of August last year, the traditional peak season. Its June business on working days was even better than August.

Ruyan Minsu in Chongming has all rooms booked out on weekends through mid-July.

"After the two-month lockdown, people are eager to walk out of their homes and Chongming Island has a supreme environment and convenient traffic," said Zhuang Yun, an investor in the minsu.

"The market confidence is up thanks to the waning pandemic situation in domestic cities," said Fang Zeqian, a tourism analyst.

"The willingness of travel among younger generation and families with children is particularly high with the approaching summer vacation."