A 24-year-old woman, whose spine was almost folded in half due to a rare disease, was discharged from Shanghai's Xinhua Hospital on Monday after an operation which remedied the results of her previous surgery and allowed her to sit straight for the first time.

The first surgery, conducted at another hospital three months ago, failed to achieve the expected result.

It is the first such instance in the world over the past decade where a patient with serious curved spine underwent surgery shortly after an unsuccessful operation and also achieved good results, the hospital claimed.

The woman, surnamed Lu from north China's Tianjin City, suffers from spinal muscular atrophy, or SMA, a rare neuromuscular disease which seriously impacts life quality. There are nearly 30,000 SMA patients in China, with about 1,500 new cases each year.

Almost all patients with SMA have curved spines, and the condition typically deteriorates after patients enter puberty. The curved spine can press on the chest and many people die due to respiratory complications, doctors said.

Lu was diagnosed with the disease at age one, when her muscles started to shrink and the spine began to curve. Due to the serious curved spine, she had to lie like a snake and was unable to sit by herself. The action pressed her heart and lungs, seriously impacting her respiration.

"The patient was a serious SMA patient with 165-degree curve before the first surgery, which just corrected the curve by 21 percent. She failed to sit straight as she had expected," Dr Yang Junlin, director of Xinhua Hospital's spine center, said.

"When she came to me, she expressed a strong desire for a second surgery.

"It was a very risky one, due to her condition and the experience of the first surgery," he added.

To ensure safety and the surgery's effects, doctors made a very detailed preparation. "Repairing surgery is much more complicated and difficult than the first one, which had impacted the original structure," Yang explained.

The 6-hour surgery, conducted on June 9, was a success.

A computerized tomography, or CT, check found the surgery had renovated the spine by 55 percent and the curve was only 75 degrees. Now the patient can sit on the bed and chair by herself, freeing her two hands.

Doctors said that patients with curved spine should receive screening and intervention early, instead of undergoing risky surgery until the curve becomes very serious. 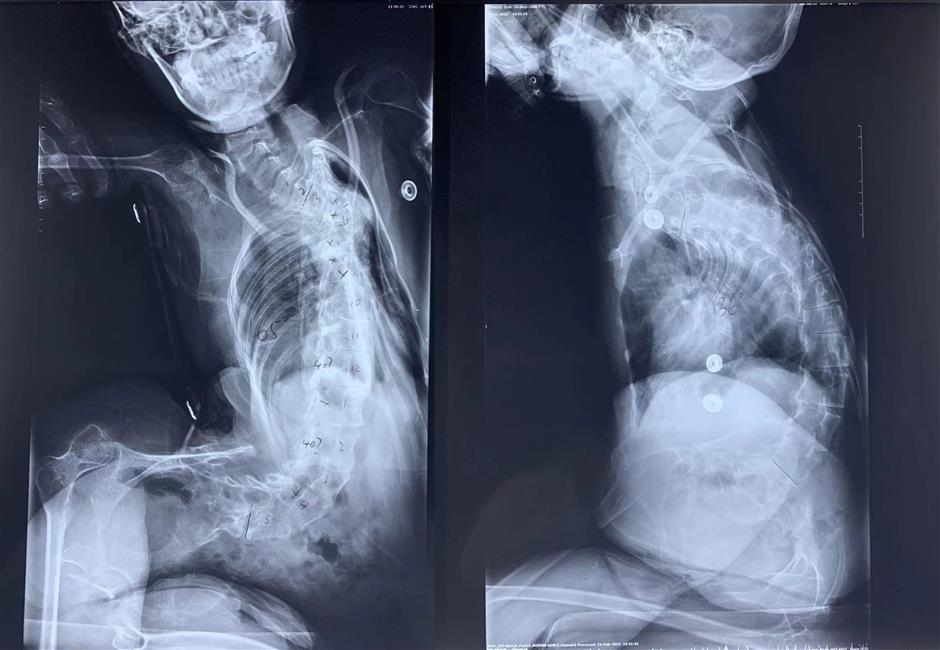 The CT scan shows a 165-degree curved spine of the patient.