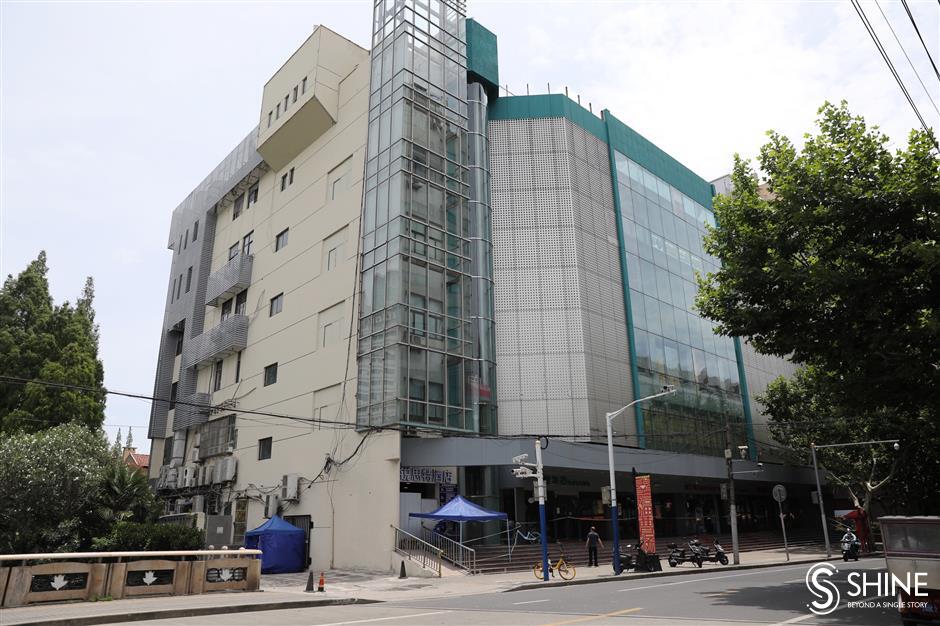 A KTV and teahouse on148 Lanxi Road in Putuo District are being blamed as the origin of the latest COVID-19 transmission in Shanghai.

Shanghai designated 26 high- and medium-risk areas of COVID-19 on Wednesday after detecting a host of new infections linked to a KTV and a teahouse, which are under investigation for alleged illegal business operations.

The city reported two community COVID-19 cases on Wednesday along with another 24 infections who tested positive during central quarantine, according to the Shanghai Health Commission.

"Most of the recent positive cases have been customers of KTVs and their close contacts," said Zhao Dandan, deputy director of the commission.

He noted that such indoor enclosed entertainment sites usually receive a high density of customers, with poor self-protection habits. They move around frequently, causing the coronavirus to spread rapidly. The current resurgence is again being led by the highly transmissible Omicron variant of the coronavirus.

According to epidemiological investigation, some of the sites failed to obey COVID-19 prevention rules or resumed operation without permission. They also failed to ask customers to scan the venue codes.

Some citizens also had poor COVID-19 prevention awareness or refused to reveal their true movements and close contacts during the epidemiological survey, Zhao revealed.

All the 24 positive cases found during central quarantine were linked to a high-risk area at 148 Lanxi Road, a commercial complex in Putuo District.

There were frequent movements among the risky groups of visitors, who later went to multiple districts and public venues across the city, he pointed out. 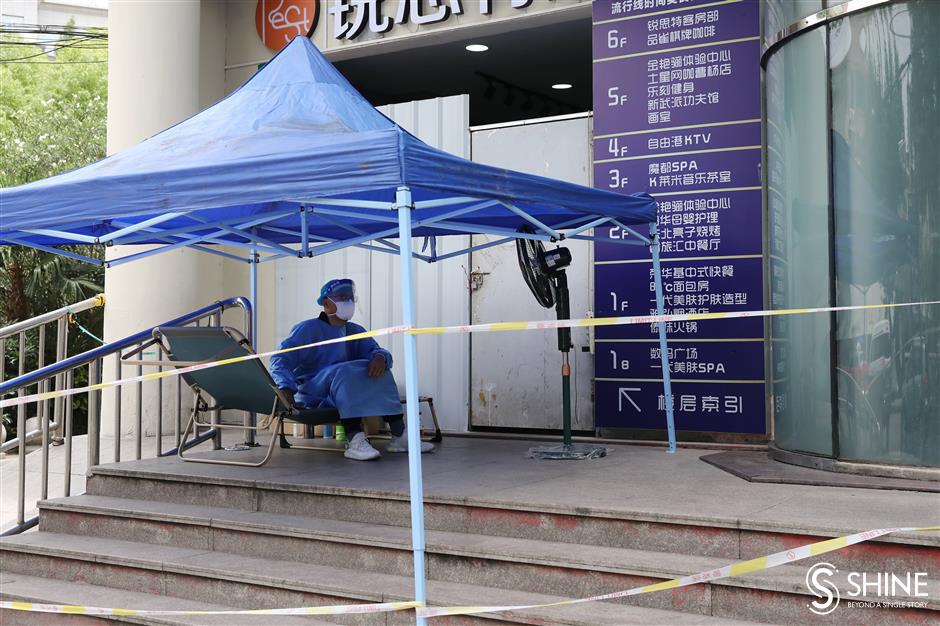 A quarantine staff guards the site on 148 Lanxi Road, a high-risk area for COVID-19.

Eighteen subdistricts and towns in nine districts have so far been named in the new cluster of infections and transmission. A mass nucleic acid screening in a dozen districts of Shanghai is being conducted through Thursday.

The citywide transmission mainly originated from the FreePort KTV on the fourth floor of the site and a teahouse/KTV on the third floor, according to Xu Shujie, deputy director of Putuo.

Both entertainment sites were suspected of illegally resuming operations without authorization, failing to implement COVID-19 prevention rules or engaging in unlicensed entertainment activities.

Investigations have been launched on the alleged violations of the two sites, said Xu, who pledged to impose strict punishment.

Two other downtown KTVs, the Xanadu Club at 85 Loushanguan Road in Changning District and the Sky Music at 785 Hutai Road in Jing'an District, have also been elevated to high-risk areas.

Twenty-two sites, including communities and hotels in Huangpu, Putuo, Minhang, Jiading, Xuhui, and Yangpu districts as well as the Pudong New Area, are now medium-risk areas.

Meanwhile, the two community infections reported on Wednesday are a 19-year-old man from Hongkou District and a 34-year-old woman resident of suburban Songjiang District.

Both are confirmed COVID-19 cases with mild conditions. They've been to shopping malls, restaurants and office buildings along with a pub and a water park. 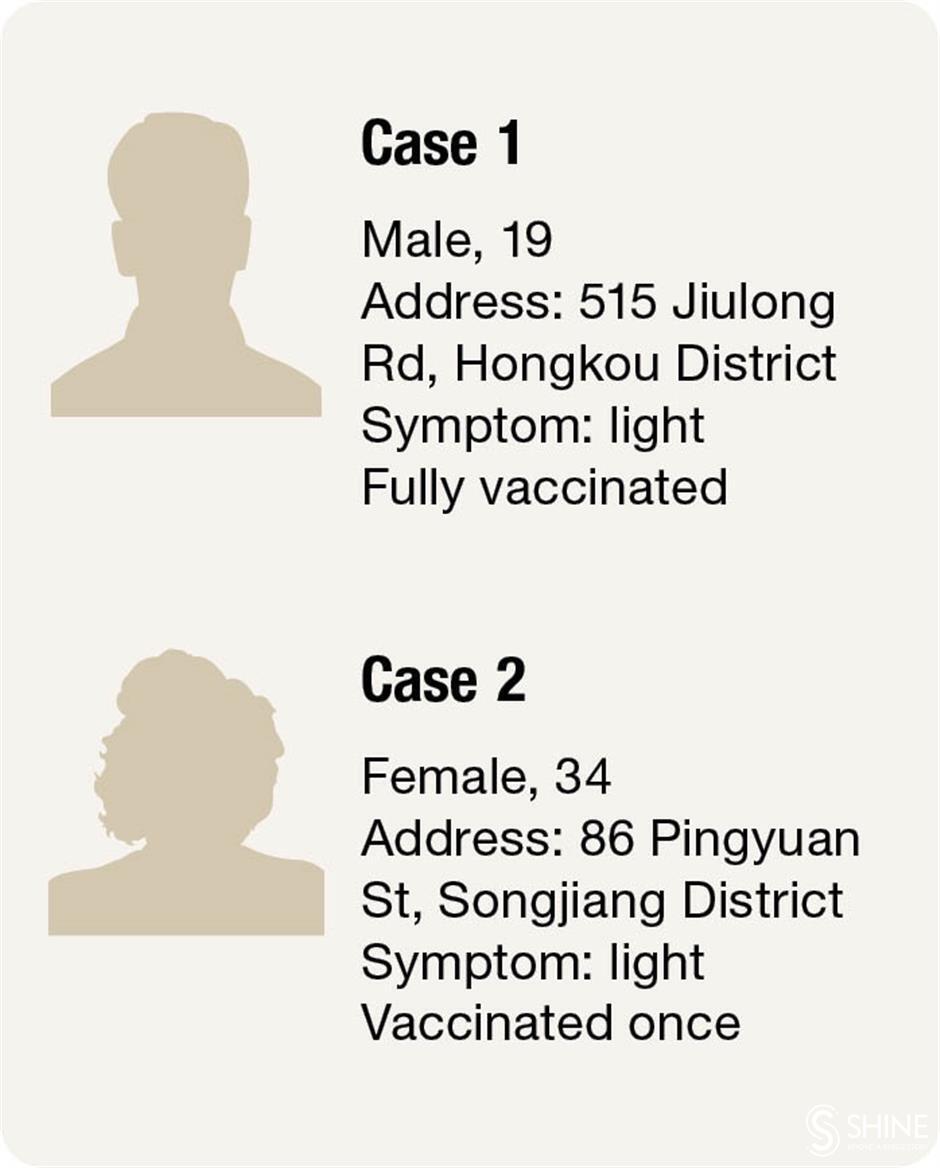 Apart from the KTV and teahouse, the site at 148 Lanxi Road also houses a spa and a gym as well as several restaurants and cafes.

Their residences at 515 Jiulong Road in Hongkou's Beiwaitan Subdistrict and 86 Pingyuan Street in Songjiang's Xiaokunshan Town were elevated to high-risk areas.

Taken together, there are now seven high-risk and 28 medium-risk areas across the city.

Other sites in the subdistricts and towns with medium- or high-risk areas are low-risk areas, meaning residents there must have a 48-hour negative polymerase chain reaction (PCR) test report to leave Shanghai.

The reopening of all local KTVs has been postponed following the recent resurgence, Jin Lei, deputy director of the Shanghai Administration of Culture and Tourism, announced on Wednesday.

Other entertainment sites, such as chess and card rooms and room escape game venues, will be gradually reopened according to the pandemic situation.

Cinemas and performance stages will be allowed to reopen from Friday to help revitalize the city's culture and tourism industry amid the pandemic, he added. 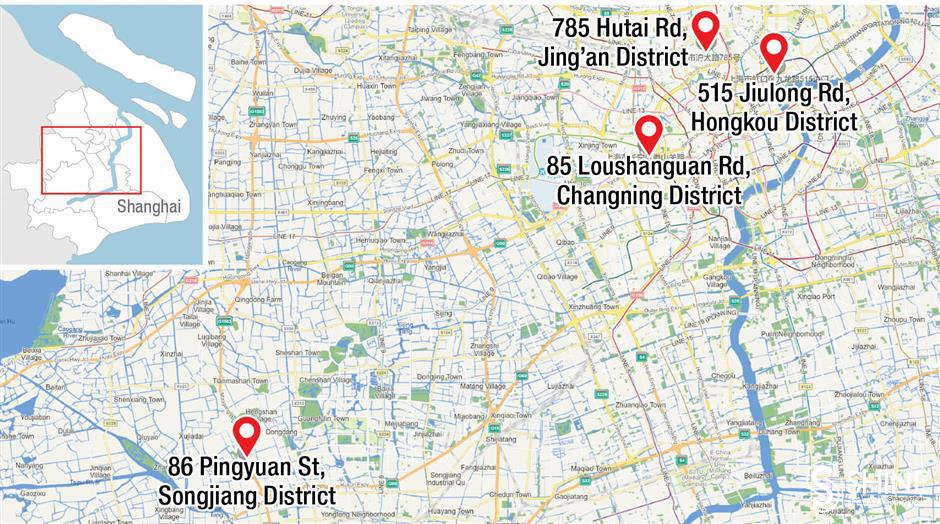