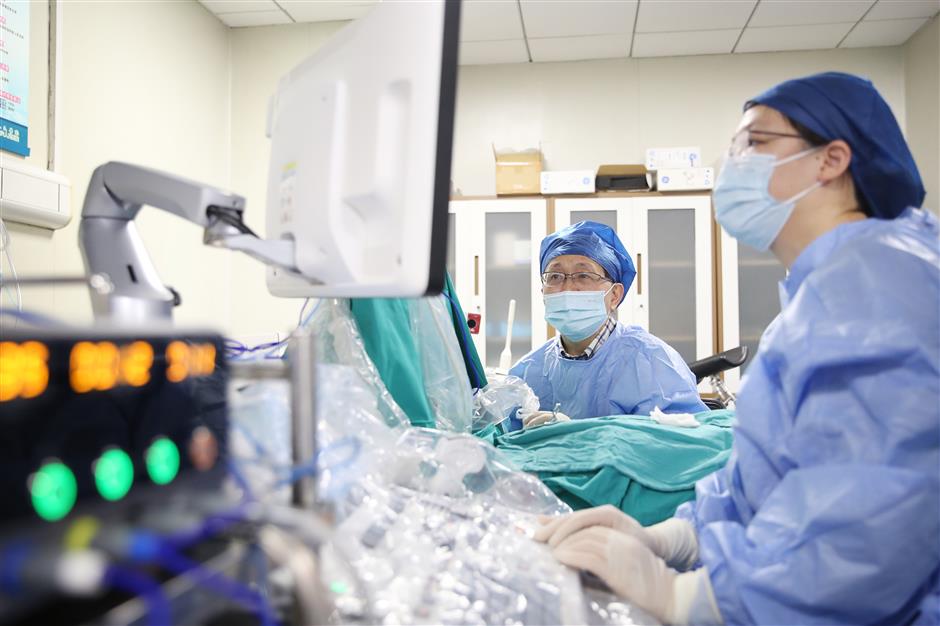 Doctors from Shanghai No. 6 People's Hospital conduct ultrasound treatment on a patient with breast cancer.

Local doctors are promoting a non-invasive therapy to women with early-stage breast cancer who do not want to undergo surgery. It will also be used to treat benign breast diseases.

High-intensity-focused ultrasound (HIFU) is a technique that uses ultrasonic waves to heat and burn cancerous tissue. In contrast to surgery, HIFU does not involve any cuts or holes in the body.

A 62-year-old woman with breast cancer sought treatment at several hospitals, all of which recommended surgery.

She refused and went to Shanghai No. 6 People's Hospital, where doctors devised an individualized HIFU therapy plan for her. The tumor was nearly destroyed after five rounds of treatment.

"We discovered a blood vessel that provided nutrition and blood supply to the tumor. If the tumor is not stopped, it will be able to grow again," Dr Hu Bing of the hospital's ultrasound department said.

"We decided to use radiofrequency ablation with ultrasound guidance to block the vessel and ablate nearby tumor tissues."

Radiofrequency ablation uses thermal energy delivered by a probe to cause coagulation necrosis of the target tissue.

A post-surgery check confirmed that the blood vessel had been destroyed and that blood circulation within the tumor had stopped.

"There was no pain throughout the procedure, and there were no cuts or wounds on the body," the patient said. "There was even no trace of it on the skin.

"This treatment without bleeding or hospitalization gave me both physical and psychological confidence."

A recent follow-up on the patient confirmed that there was no cancerous growth or transfer.

Breast cancer is the most common cancer affecting women worldwide.

It accounts for 7 to 10 percent of all cancers, particularly among women aged 40 to 60.

Women are more vulnerable before and after menopause.

According to Dr Guo Qian of Shanghai No. 6 Hospital, breast tissues are ideal for ultrasound treatment, which is beneficial for patients in the early stages of cancer or who are unwilling to undergo surgery.

"International studies have proven the effectiveness and safety of ultrasound treatment for breast cancer," Guo added.

In addition to cancer, ultrasound treatment for benign diseases such as breast nodules is effective, doctors said.