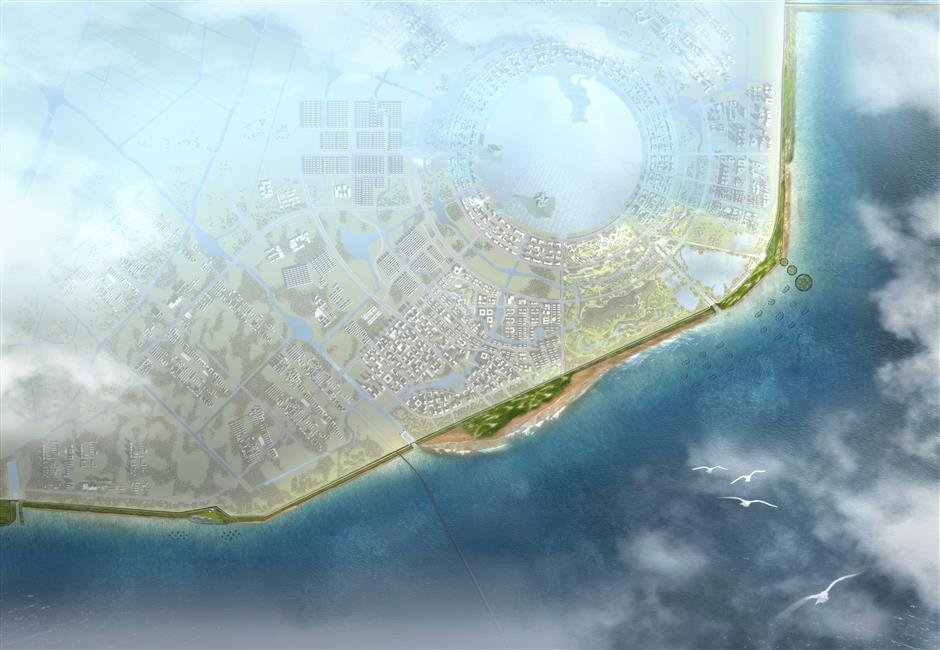 An artist's rendition of the Lingang Special Area oceanic project.

Shanghai is promoting smart water meters and looking at time-shared water use to keep costs down for residents, the Shanghai Water Authority (Shanghai Oceanic Bureau) said.

Digital technologies have been adopted in many water management areas in the city, such as the pipe maintenance and usage monitoring.

"I once visited a company and saw that robots can clear the pipes through sonar and visual technology," Shi Jiaming, head of the city water authority, said on Monday in an interview.

"So smart technologies, such as robots, can play a vital role in securing water supply and make the city more resilient to natural disasters."

As the city implements its digital vision, smart water meters are expected to play a more important role.

"But it is still space from the limit as we have made a lot of efforts on improving infrastructure and saving water," Shi said.

Apart from water supply and water saving, the bureau is also in charge of the city's drainage system, water environment management, flood prevention as well as exploring and protecting marine source.

Four big reservoirs are now in full operation to deal with the city's water demand due to the prolonged and intense heat wave.

The bureau has also upgraded 220 million cubic meters of water tanks in residential compounds built before 2000.

And to boost the city's flood prevention ability, the bureau will also help communities build more facilities to deal with heavy rains.

"For example, a 400-square-meter lawn will hold more water than a flat floor," Shi said.

The Shanghai Oceanic Bureau is in charge of the development and protection of the surrounding ocean.

It focuses on the protection and restoration of beaches and embankments, the restoration of biodiversity in the inter-tidal zone, the tracking and monitoring of the ecological environment of coastal areas, and support facilities for popular science management and protection.

The project targets 17 kilometers of coastline, with a total investment of 530 million yuan (US$78 million).

It will be built over two years to solve major ecological problems such as the shrinking of wetlands in coastal areas and the threat to ecological security due to the invasion of alien species.

The wetlands in the Lingang Special Zone