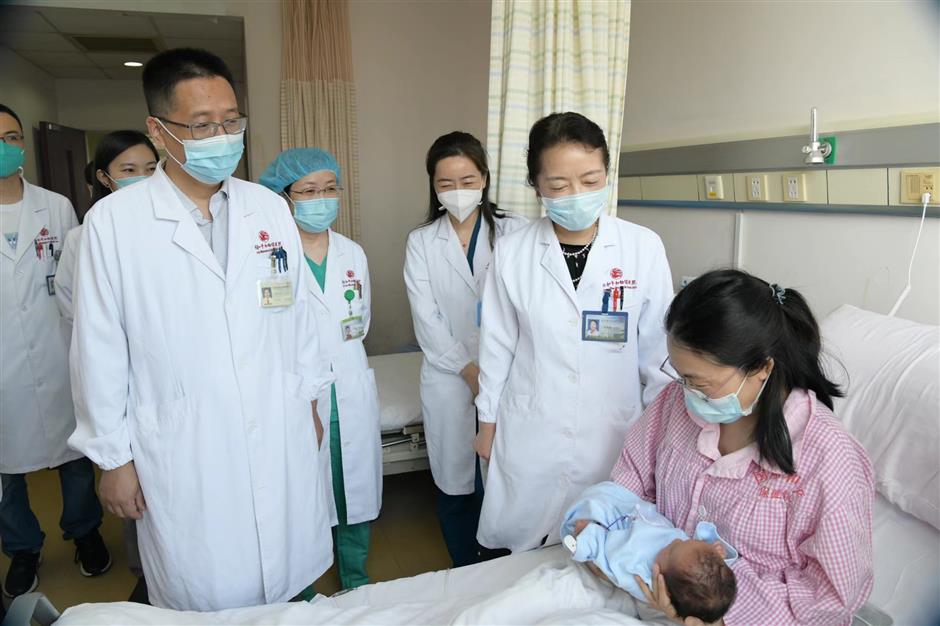 The woman, surnamed Zhao, finally holds her baby after a 5-year ordeal of cancer treatment, surgeries and miscarriages.

A woman, who underwent five-year treatment and surgeries due to cervical cancer as well as ectopic pregnancy and repeated miscarriages, finally delivered a baby girl at Shanghai International Peace Maternity and Child Health Hospital, the hospital said on Wednesday.

The 37-year-old woman surnamed Zhao was pregnant in 2017 but the fetus stopped growing. When she went to the hospital for an abortion, doctors found that she had early-stage cervical cancer.

Bearing in mind the woman's birth desire, doctors designed a surgery plan to retain her fertility.

Since the couple failed to conceive despite many attempts until 2019, they decided to go in for in vitro fertilization and underwent embryo transplantation in September 2019.

However, one fetus was found with ectopic pregnancy, a condition where fertilized egg attaches outside the uterus. If untreated, it may lead to life-threatening bleeding. So, one side of Zhao's fallopian tube had to be cut, with only one fetus kept. However, she suffered a miscarriage.

"Patients with cervical cancer surgery can easily suffer miscarriage or premature delivery because doctors have to cut the neck of the uterus, since the fetus can press the uterus during growth," Dr Wang Yudong from the hospital's oncology department explained.

"To help the patient, we decided to build an artificial one by cerclage in the lower part of the uterus. It is rarely used in clinical practice on such patients due to their complicated condition and risk of surgery."

The couple decided to give it a try in order to have a baby.

Doctors worked out a detailed plan for the woman, who received surgery to have an artificial neck of the uterus and then in invitro fertilization.

She finally underwent a caesarean operation to deliver the girl and then doctors removed her uterus to avoid a cancer relapse.

"It was so difficult in the past five years. But I am happy that I can finally hold my baby girl in my arms. All pain and trouble were worth it," said the new mother.