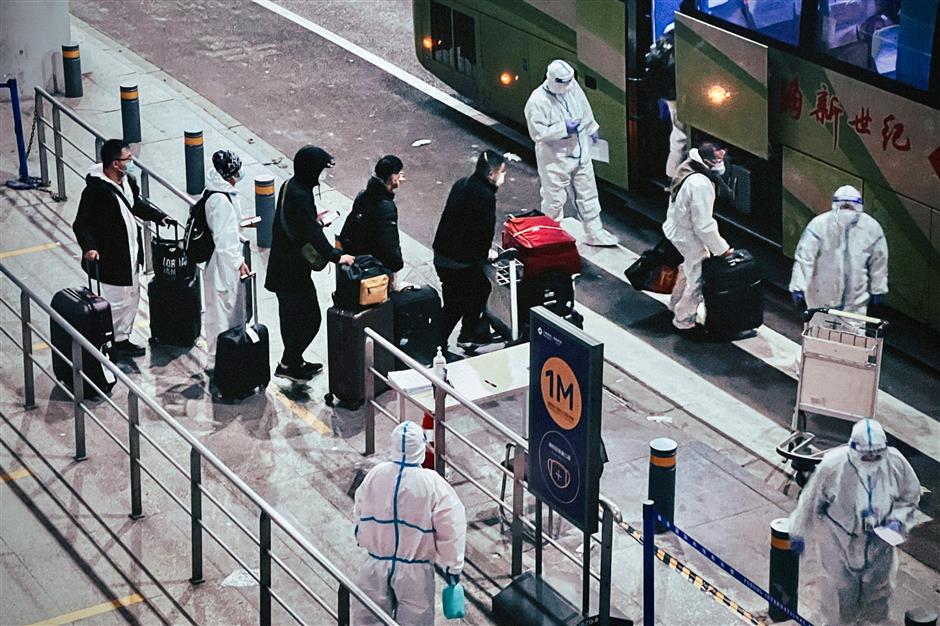 Inbound travelers prepare to board a bus to their quarantine hotels at Pudong International Airport.

Travelers arriving at Pudong International Airport can now get to local quarantine hotels faster thanks to a host of new smart technologies that support COVID-19 prevention and control.

On average, it takes four hours for an overseas traveler to be transported to a closed-loop quarantine hotel after landing at Pudong airport, compared to 10 hours previously, an official with the Shanghai Airport Authority said on Thursday.

"Information technologies have been widely used at Pudong and Hongqiao airports during the fight against the coronavirus pandemic," Zheng said.

Digital management and information sharing initiatives have improved airport staff efficiency while preventing the entry of COVID-19 cases, he added.

More than 100 officials and experts from domestic airports, airlines and aircraft makers are discussing the latest smart airport technologies during the Shanghai forum that runs through Friday. The Shanghai Society of Aeronautics is hosting the event, which was organized by Galleon (Shanghai) Consulting Co.

Pudong and Hongqiao airports aim to become globally renowned smart airports by 2030. Both airports, among the 25 busiest in the world, will shift their priorities from physical expansions to digital and intelligent transformations.

With an eye to enhancing cybersecurity, the airports will implement new technologies and applications to their operations, services, safety, business affairs, management, logistics, transportation, energy and environment.

To achieve that goal, the airport authority will develop digital versions of both airports by the end of the year. The airports' management teams, for instance, will be able to oversee and control operations on a single screen.

A new "easy security check" service is up and running at Hongqiao airport, said Zheng. Travelers can now register their personal and flight information in advance on Alipay for security fast-pass service after arriving at the airport.

The airports' operational efficiency is expected to improve, while operation and maintenance costs will be reduced with artificial intelligence applications. Big data collected via 5G networks will contribute to operation and decision-making systems, according to the blueprint.