Shanghai's sustained growth puts it on par with developed countries 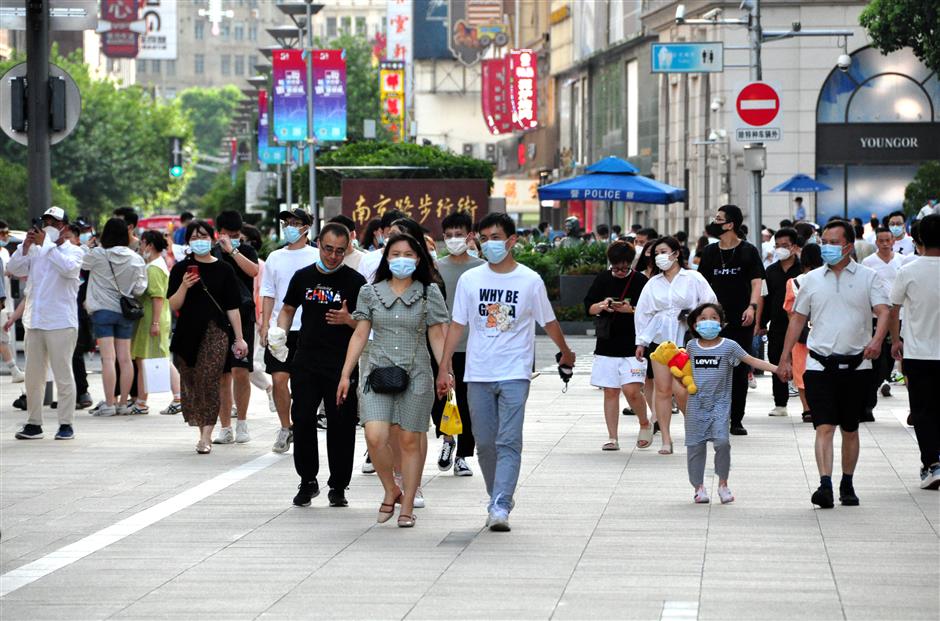 The Nanjing Road Pedestrian Mall is packed with crowds again as the COVID-19 restrictions are eased.

Shanghai mayor said on Monday that the city's per capita GDP has surpassed the average level of industrialized nations as it strives to become a metropolis with global influence.

Shanghai's GDP more than doubled over the past 10 years to 4.32 trillion yuan (US$639 billion) in 2021, Mayor Gong Zheng said. Statistics show that Shanghai was fourth last year behind New York, Tokyo and Los Angeles, and surpassed London and Paris.

"Shanghai's per capita GDP has jumped to US$26,900, meeting the standards of upper- and middle-level developed countries," Gong said at a press conference today about the city's achievements over the last decade.

Gong said Shanghai is still one of the safest cities in the world, and the air and water qualities have reached their highest standards ever.

The mayor emphasized that the city will balance its economic and social development and COVID-19 prevention more effectively.

Since July 31, there have been no community infections recorded in Shanghai, and no positive cases have been reported among those in quarantine for a period of seven days. All the high-, medium- and low-risk areas have been removed, he said.

The city will rely on strategies like early detection, quick investigation, classification of risk areas, self-health management, as well as the reservation of makeshift hospitals and other anti-COVID resources during routine COVID-19 tests.

"We should be grateful to the 25 million citizens who overcame the difficulties and pressure throughout the long lockdown, and cooperate with the various measures to help win the 'great Shanghai campaign,'" Gong said.

The People's Liberation Army and other Chinese provinces also greatly assisted Shanghai during the lockdown. Since March, a total of 24,600 medical personnel, 25,800 PCR test personnel and 5,658 PLA medical personnel rushed to Shanghai.

The provinces of Jiangsu, Zhejiang and Anhui had made space for 123,000 quarantine rooms during the COVID crisis.