First baby delivered at the new city-level hospital in Fengxian

At 4.18 kilograms, the baby boy was delivered at 11:39pm on Sunday. His mother, who lives in Fengxian District, was able to give birth to the baby just near her home.

Previously, she had to travel for over 40 kilometers to the hospital's headquarters in downtown Xuhui District. The new branch is only 2 kilometers from her home.

"I registered my pregnancy and received regular prenatal checks at the hospital in Xuhui District. The trip took over 2 hours each time. With my check-ups increasing to once a week after entering late stage pregnancy, my husband and I felt the routine was too difficult," said the 28-year-old new mother surnamed Wu.

"I had learnt about the new branch and wondered whether I could deliver closer to home," she said. "My due date was September 15, and the branch was expected to open the day after. I started to feel labor pains on Saturday and was sent to the newly opened branch in the afternoon. It's so convenient for pregnant women in Fengxian. We don't need to go all the way downtown any more".

The entire delivery process was successful and the new hospital received its first baby.

The new branch has 500 beds and offers medical services in obstetrics, gynecology, pediatrics and reproductive health.

It is equipped with a reproduction center, fetal medical center, prenatal diagnosis center, and a female disease center.

In addition to people in Fengxian, the new branch also targets those in the Yangtze River Delta region and other provinces, officials said.

Shanghai introduced the five "new cities" in the suburban areas of Jiading, Qingpu, Songjiang and Fengxian districts, as well as Nanhui in the Pudong New Area to boost social and economic development. 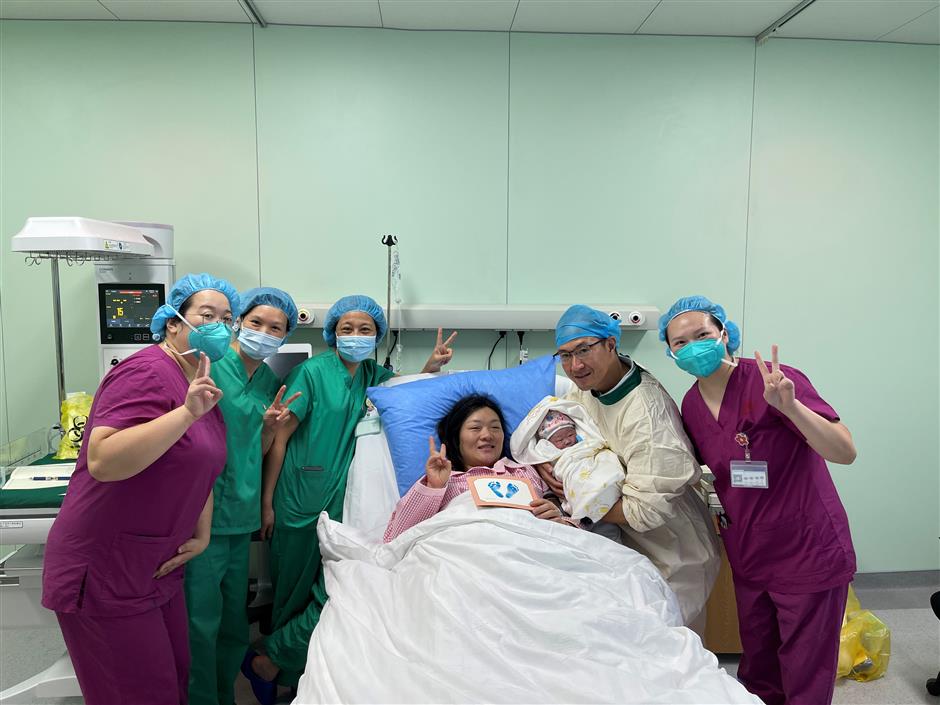 Medics take a photo with the new parents and baby, the first to be delivered at the new hospital in Fengxian.