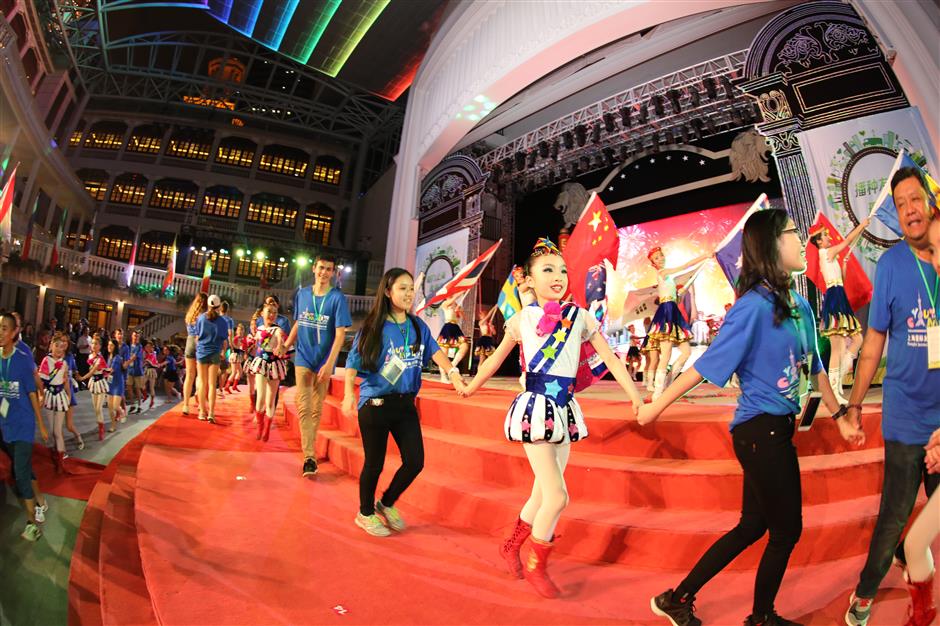 Shanghai is striving to become one of the most popular cities in Asia for overseas students and a dynamic international education center, the head of the city's education authority said on Tuesday.

About 80,000 students from abroad are studying in Shanghai and those pursing a master's or doctor's degree account for 65 percent among them, Wang Ping, director of the Shanghai Education Commission, told a Ministry of Education press briefing in Beijing.

A slew of influential education exchange programs have been launched in the eastern metropolis.

The exchange program between Chinese and the United Kingdom's math teachers, for instance, has helped to promote the city's successful math education patterns abroad. The English version of a local math textbook series for pupils – "Real Shanghai Mathematics" – has won the reputation as "the world's leading mathematics tutorial," Wang noted.

The exchange program was initiated after students from Shanghai topped those from other countries in the PISA test in 2009 and 2012. 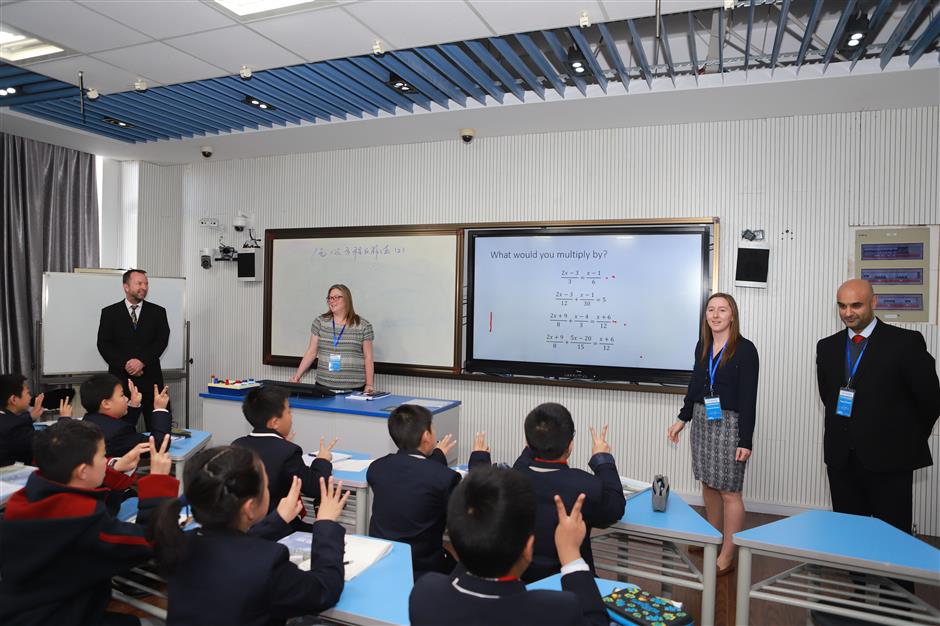 British teachers give a math lesson at a Shanghai school in 2019 as part of an exchange program among math teachers from the two countries.

It began in September 2014 when 60 math teachers and 10 principals from England arrived in Shanghai to observe math teaching in local schools and meet their counterparts, while Shanghai also sent 60 local teachers to the UK in November that year to teach in 22 British schools.

To date, more than 800 British and Chinese teachers have benefited from the program which features mutual visits, theoretical discussions, immersion teaching exchanges, class demonstrations, field investigations and sharing experiences. More British teachers, totaling 20,000, have listened to the online classes given by local teachers.

Thanks to the gathering of international education resources, local students have excelled to the highest level in the PISA global education test, hosted by the Organization for Economic Cooperation and Development, in recent years, Wang revealed.

Shanghai has launched 176 education programs in cooperation between the city's top universities and their leading foreign counterparts.

Key projects include Shanghai New York University, the first Sino-US university in China known as NYU Shanghai, which will celebrate its 10th anniversary later with a new campus under construction.

As a key international education demonstration of the city, NYU Shanghai has about 2,000 undergraduates at present, including half from abroad, said Tong Shijun, chancellor of the university.

"The disciplines and specialties focus on the international and creative talent required by China's development, Shanghai's urban innovation and Pudong's opening up," Tong pointed out.

NYU Shanghai has established six research centers and laboratories and attracted some of the world's top talent, including two Nobel Prize winners in economics, according to the chancellor.

Other cooperative projects, such as Shanghai Vancouver Film School, College of Shanghai Lausanne Hospitality Management, and Shanghai International College of Fashion and Innovation, have produced talent in the film, hotel management and fashion innovation sectors. 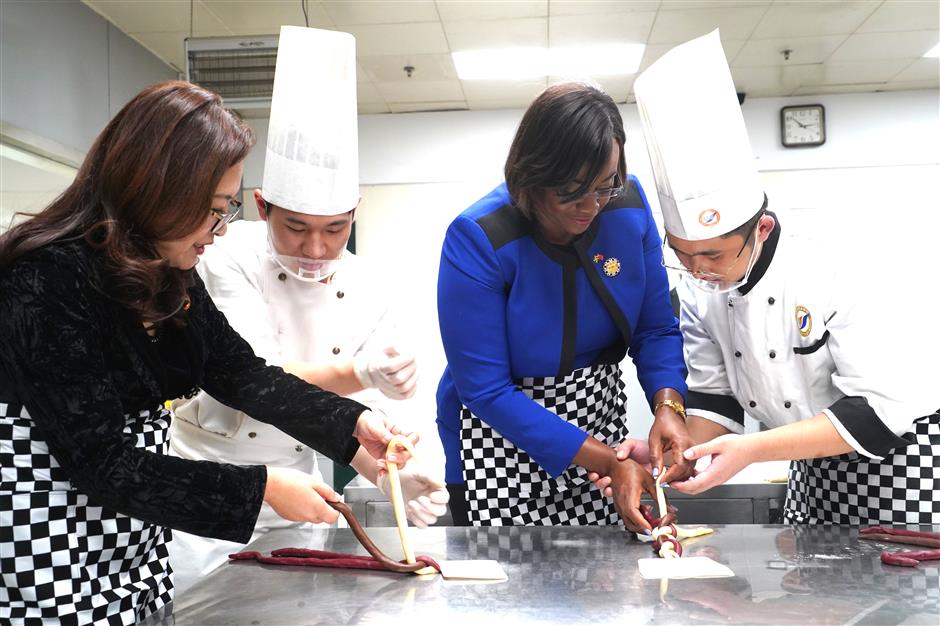 Shanghai also aims to expand the global horizon of local students with a series of cross-cultural exchanges.

The city government sponsors 2 percent of local students to study overseas and 100 undergraduates to work at international organizations as interns annually.

Furthermore, summer camps are organized every year between local students and their peers from Shanghai's sister cities.

Since such camps were first launched in 2009, they have attracted more than 1,400 students and teachers from 43 international sister cities or counties worldwide, according to Jiang Haishan, president of the Shanghai International Education Association.

Despite the COVID-19 pandemic, the summer camps are still ongoing but have been shifted online. 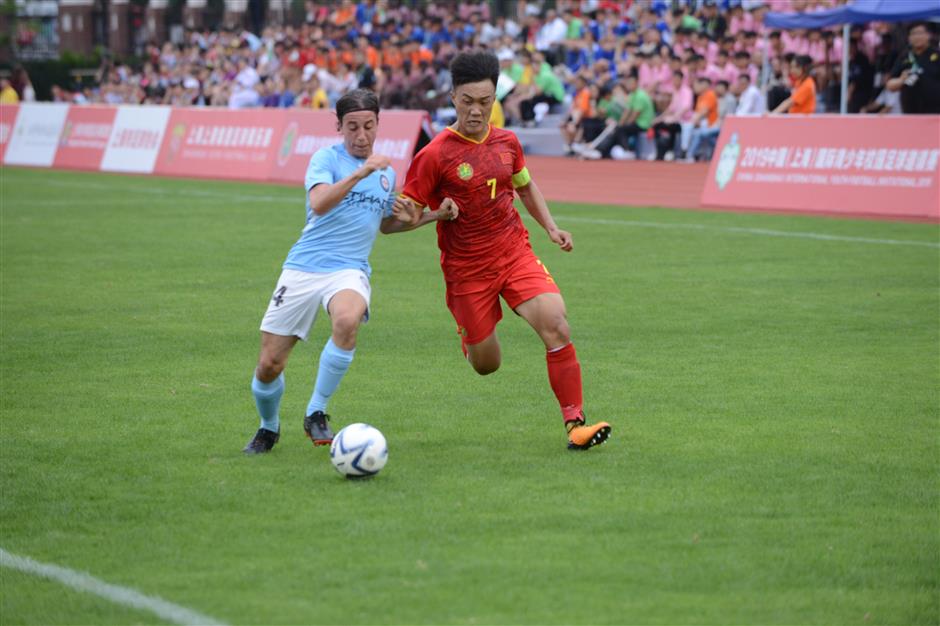 A football friendly match is held every year between Chinese students and their foreign peers.

"The camps have displayed a real, multifaceted and complete China to foreign students and teachers," Jiang claimed.

The camp participants not only enhance their self-confidence, tolerance, responsibility and capability to understand international cultures, but also establish long-term friendship with each other, he said.

Shanghai is also contributing to global education management. For instance, UNESCO has set up a teacher education center in the city. Shanghai Open University is a supportive partner for a remote education program of the United Nations agency.

"Shanghai aims to develop top-class education to match its status as an international metropolis with global influence," the education commission's Wang said. 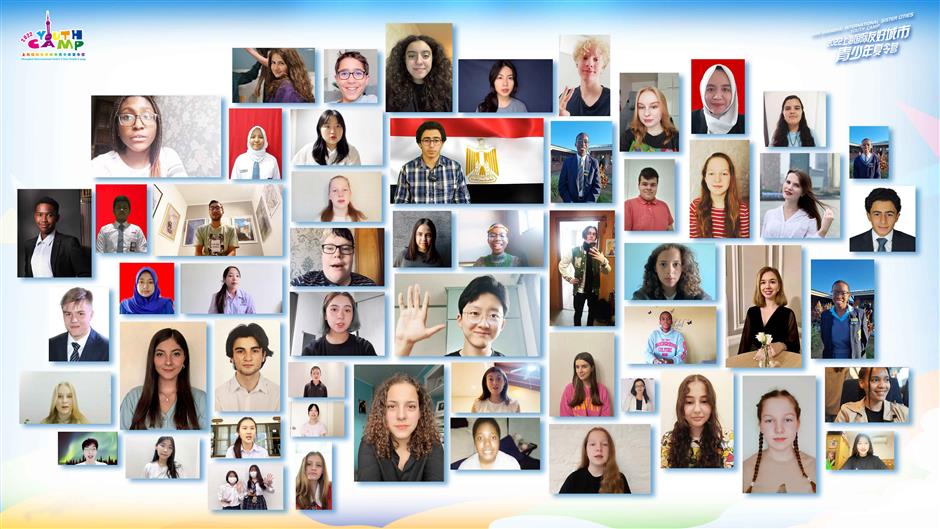 Students from across the world meet online during the COVID-19 pandemic in July 2022.