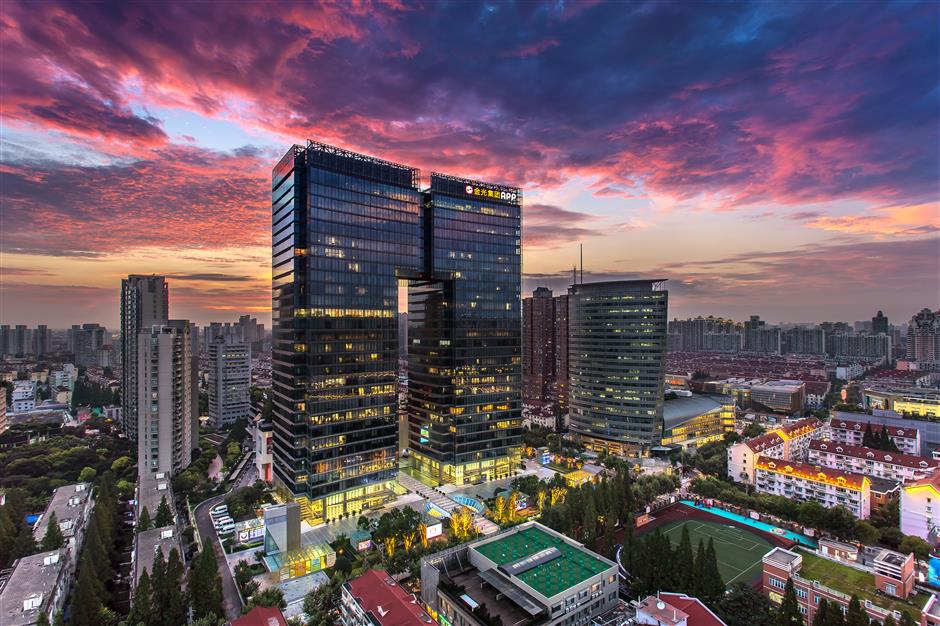 A view of Arch Shanghai in Hongqiao area, which became the first local office building to generate more than 10 billion yuan (US$1.37 billion) in annual tax revenue.

Arch Shanghai in Hongqiao area has become the city's most lucrative office building amid the COVID-19 resurgence this year with an annual tax revenue of over 10 billion yuan (US$1.37 billion).

The building in downtown Changning District has thus become the city's third 10-billion-yuan office building, following Plaza 66 in Jing'an District and the IFC in the Pudong New Area.

The 148-meter building at the junction of Loushanguan and Maotai roads covers a total office area of 110,000 square meters. The tax revenue per square meter has reached 90,000 yuan, setting a new record among local office buildings.

The building is home to 135 companies which employ some 12,000 office workers. Leading companies include e-commerce platform Pinduoduo, Herbalife Nutrition, sports brand ASICS and Brother China, along with other firms mainly from the Internet, health, artificial intelligence and financial service sectors. It accommodates eight of the world's top 500 multinational enterprises.

"These leading firms have attracted some of their up and downstream companies to create industry clusters within the building," said You Yan, director of the Changning investment promotion office.

The district government has also designated a team of specialized service staff to serve companies in the building.

The 72 key office buildings in Changning, including Arch Shanghai, have generated a total of 20 billion yuan in tax this year, accounting for over 60 percent of the district's total tax revenue, according to the district government.