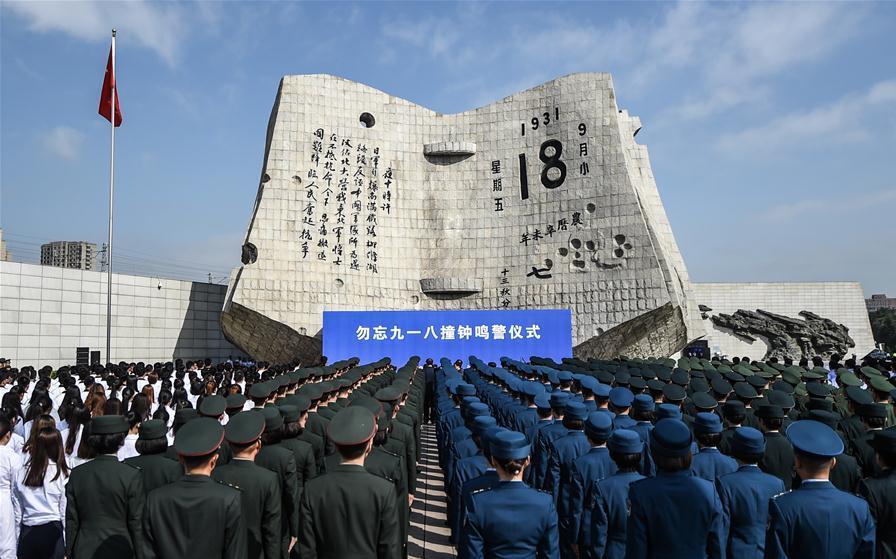 The bell rang and siren went off Monday at the September 18 Incident History Museum in Shenyang, capital of northeast China's Liaoning Province, to mark the outbreak of the war of resistance against Japanese invaders 86 years ago.

Cui Junguo, who recently retired after serving at the museum for more than two decades, knows almost every detail of the incident.

Behind the museum is an expressway linking Harbin with Dalian. More than eight decades ago, it was part of the South Manchuria Railway, where the shocking Liutiaohu incident occurred.

On September 18, 1931, the Japanese Kwantung Army stationed in northeast China destroyed a section of the railway near Liutiaohu and then falsely accused the Chinese military of causing the explosion.

Using this as a pretext, the Japanese then bombarded Shenyang and began invasion of northeast China.

By January 1932, all three provinces in northeast China were occupied by the Japanese army.

"It's painful when I hear the siren pierce the sky," said Cui, 60. "It's like you suddenly traveled back in time."

The bell was rung 14 times, representing the 14 years the Chinese people fought the Japanese invaders. The period has been referred to as the "darkest days of modern China."

Over 80 years have passed, but memory of that part of history remains.

"No one in Shenyang gets married on September 18," Cui told Xinhua.

People around China hold events every year to mark major incidents of the Japanese invasion, including the Lugouqiao (Marco Polo Bridge) Incident and the Nanjing Massacre.

"The way you treat history defines your future path," said Wang Jianxue, vice chairman of the Society for Study of Modern and Contemporary Chinese Historical Materials.

In late August, "Twenty Two," a documentary featuring the stories of 22 comfort women, became an unexpected hit. It is the first Chinese documentary to surpass 100 million yuan at the box office.

In the meantime, another documentary, "The Truth of Harbin Unit 731," was released by Japanese public broadcaster NHK. It revealed the outrageous crimes committed by Unit 731, a covert biological and chemical warfare research and development unit of the Imperial Japanese Army during World War II, triggering heated discussion among Japanese audiences.

"The history seems far away, but it is always with us. Only by remembering it can we ensure the horrors are never repeated," said Su Zhiliang, professor at Shanghai Normal University.

Cui's daughter became a guide at the museum five years ago. "It is sort of an inheritance," said Cui. "Telling that part of history is meaningful, and I believe she can do a good job."