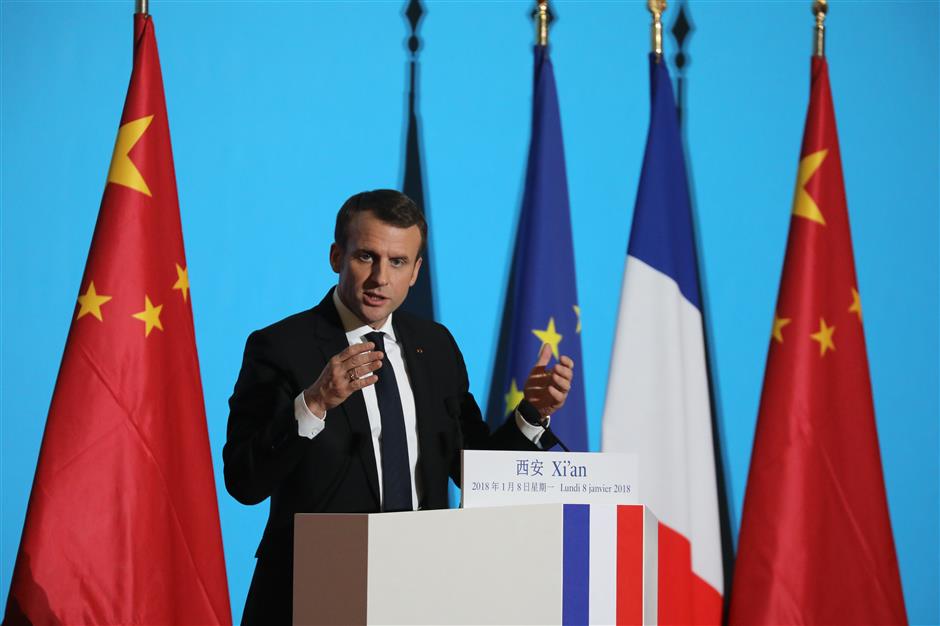 French President Emmanuel Macron delivers a speech at Daminggong Palace during a visit to the northern Chinese city of Xi'an on January 8, 2018.

French President Emmanuel Macron urged Europe Monday to take part in China's Silk Road revival plan, despite some European misgivings about the massive project, as he began a state visit.

Macron also called on Europe and China to team up on curbing climate change, in the face of US plans to withdraw from the Paris accord.

"Our destinies are linked," he said in a keynote speech on the future of Sino-French relations during a visit to the northern city of Xi'an, the starting point of the ancient Silk Road.

"The future needs France, Europe and China," Macron said, adding he would travel to China "at least once a year."

Macron began his three-day visit in Xi'an as a gesture to Chinese President Xi Jinping's huge New Silk Road project, an initiative to connect Asia and Europe by road, rail and sea.

The US$1 trillion infrastructure program is billed as a modern revival of the ancient Silk Road that once carried fabrics, spices and a wealth of other goods in both directions.

Known in China as "One Belt, One Road", the plan will see gleaming new road and rail networks built through Central Asia and beyond, and new maritime routes stretching through the Indian Ocean and Red Sea.

While France had been cautious about the plan, Macron heartily endorsed the initiative.

"It represents a real opportunity to create bridges, through exchange, between countries and civilisations, just as the ancient silk routes once did," he said.

"I think it's very important that Europe and China strengthen their collaboration on the initiative. France is ready to play a leading role in this."

But Macron warned that it should be carried out "within the framework of a balanced partnership" -- a reference to concerns about China's trade surpluses. France has a 30-billion-euro (US$36 billion) trade deficit with China. 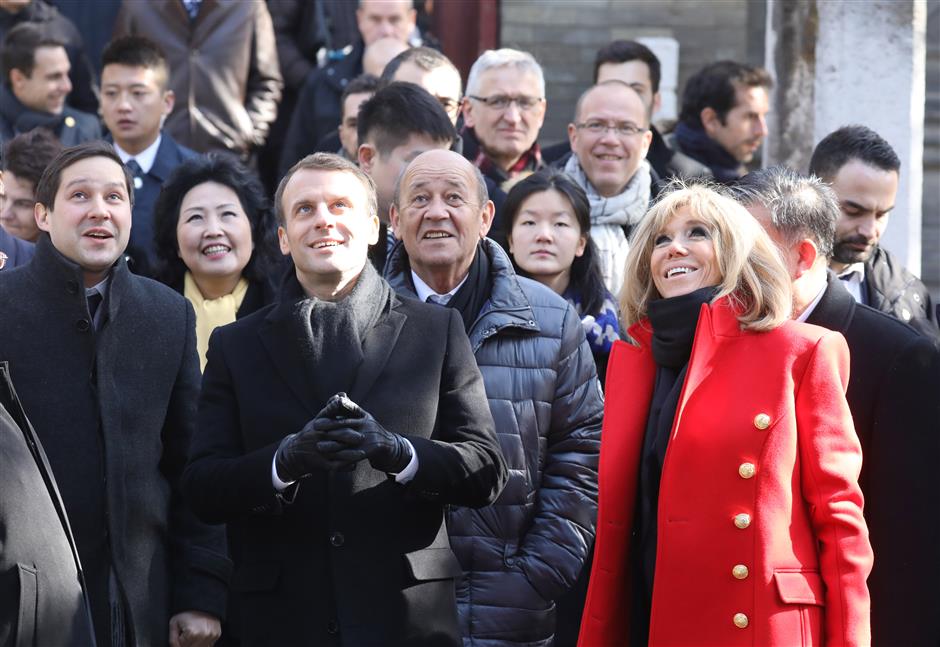 French President Emmanuel Macron (centre left) and his wife Brigitte Macron (centre right-red coat) are given a tour during a visit to the Great Mosque of Xian in the northern Chinese city of Xi'an on January 8, 2018.

Macron's first official visit to Asia marks a new stage for his diplomacy, which has so far been concentrated on Europe and Africa.

He plans to seek a "strategic partnership" with Beijing on issues including terrorism.

In a French version of panda diplomacy, Macron will give Xi a horse as a gift: a retired Republican Guard horse that is currently in quarantine.

On climate change, Macron said he would talk to Xi about "relaunching the climate battle" by preparing an increase in their engagements to combat global warming at the COP 24 talks in Poland later this year.

He praised China, the world's top polluter, for committing to the Paris accord after US President Donald Trump notified that America would pull out of the pact.

"China kept its word," he said. "You demonstrate your immense sense of responsibility."

Cooperation will "show the world that the French and Chinese are capable of making our planet great and beautiful again," he said in Chinese.

After Xi'an, Macron will head to Beijing along with his delegation which includes some 60 business executives and representatives of institutions.

Macron and his wife Brigitte will meet Xi and his wife Peng Liyuan on Monday night. On Tuesday he will visit the Forbidden City, meet top Chinese officials and oversee the signing of business deals.

Along with Brigitte, Macron visited the famous terracotta warriors in Xi'an, as well as a centuries-old Big Wild Goose Pagoda – a Buddhist site – and the city's mosque.

The 8,000-man clay army is crafted around 250 BC for the tomb of China's first emperor Qin Shihuang. 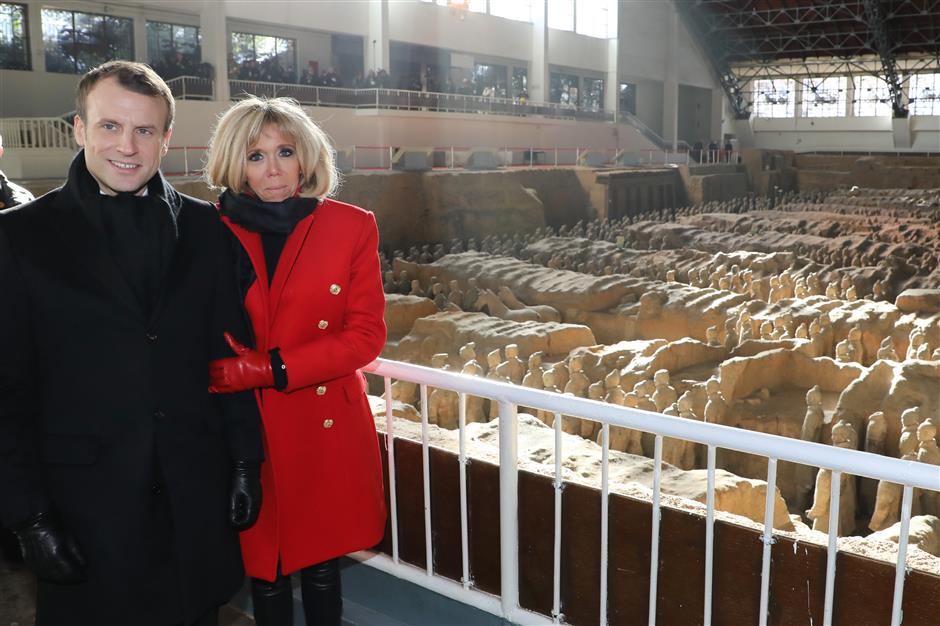 French President Emmanuel Macron (left) and his wife Brigitte Macron (second left) pose for photos next to the famous terracotta warriors during a visit to the northern Chinese city of Xi'an on January 8, 2018.