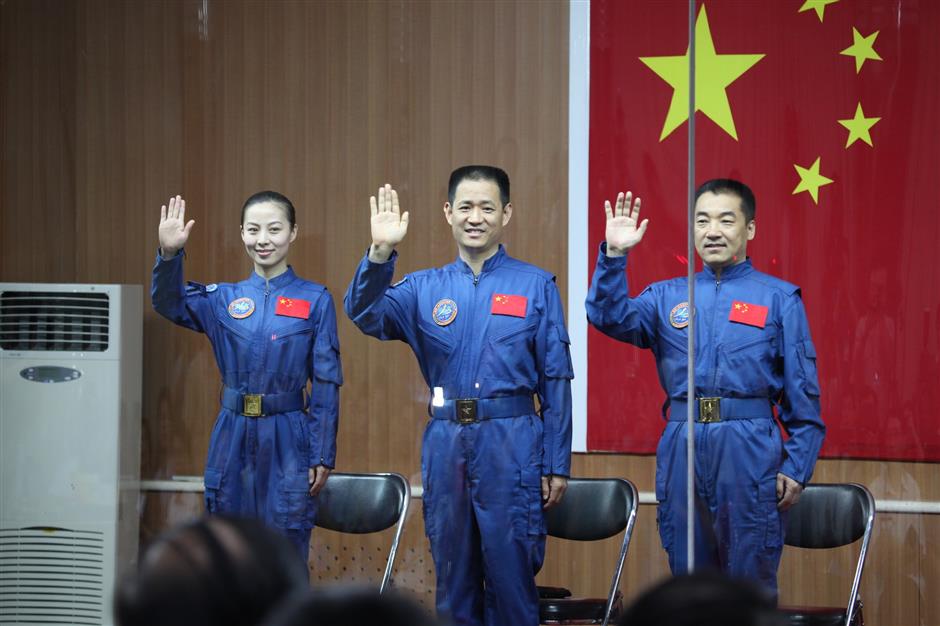 Taikonaut Zhang Xiaoguang prepared for 15 years to go into space.

Zhang, one of the 14 pilots recruited as China's first batch of taikonauts, was 32 when he joined the Taikonaut Corps of People's Liberation Army at its founding in 1998.

In order to pass the more than 30 fundamental courses that are required of every taikonaut, he wrote over 200,000 Chinese characters of study notes.

He studied advanced mathematics, aerodynamics, astronomy, English, environmental science, medicine, psychology, space science and technology and many other theoretical courses, all in one year, a superhuman task equal to compressing a normal college student's four-year study plan into 12 months.

Liu Yang, in the second batch of taikonauts in 2010 and China's first woman in space in 2012, described the taikonaut life as "becoming a student once more."

To pilot the spacecraft, Zhang had to memorize nine spaceflight manuals. He learned from Yang Liwei, China's first man in space. He bought a camera, took photos and videos of every nook and cranny of the capsule simulator, saved them on his computer, and pored over them whenever he had a spare second.

Zhang could soon close his eyes, and tell the name, position and function of every button on the flight deck, without a mistake.

He was described by his crewmate Nie Haisheng as the most persistent man he had ever met.

In 2013, Zhang, Nie Haisheng and Wang Yaping, were selected for the Shenzhou-10 mission, Zhang's first trip to space. To an audience of over 300 schoolchildren in a Beijing auditorium, Wang Yaping delivered China's first lecture from space with Zhang as her cameraman.

On its 15-day journey, Shenzhou-10 docked with orbiting space lab Tiangong-1 twice, taking China ever closer to the objective of a permanent, manned space station by 2020.

On his return to Earth, Zhang said, we were dreamers, and now our dream has come true. 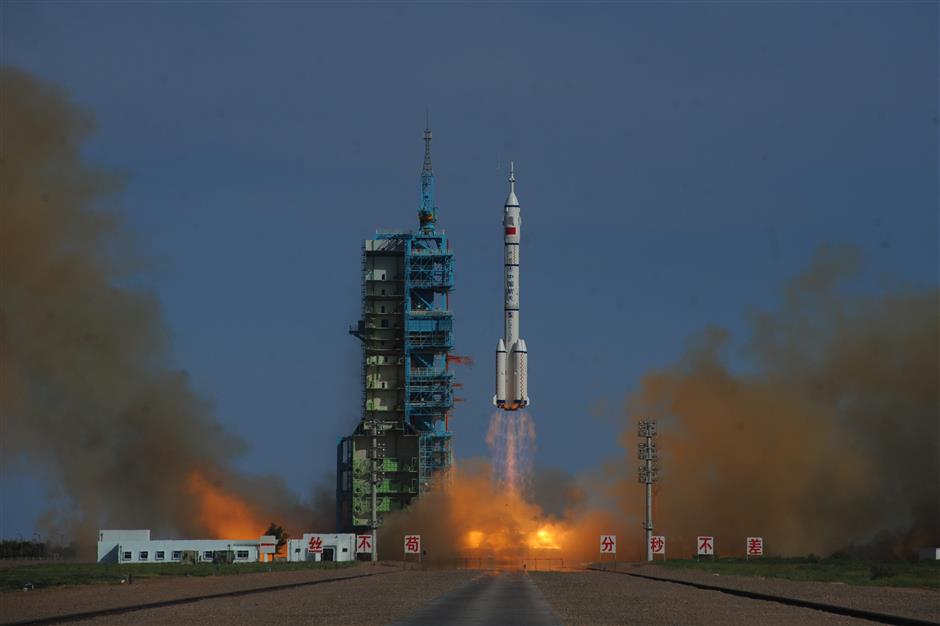 While chasing that dream, he failed the selection tests for Shenzhou-5, Shenzhou-6, Shenzhou-7 and Shenzhou-9 manned space missions. But Zhang didn't give up. Instead, he worked even harder.

"Without exceptional tenacity," said Huang Weifen, deputy chief designer of the taikonaut system with the Taikonaut Center of China, "they don't make it."

Apart from theoretical study, taikonauts are subjected to a panoply of physical and psychological training.

In a pressure chamber, taikonauts go through a simulated ascent from ground level to an altitude of 5,000 meters in five minutes, with all the dizziness, nausea and even shock that oxygen deprivation brings.

In an attempt to turn his weakness into strength, Zhang was always the first to arrive at the training center and the last to leave. In the selection test for Shenzhou-10, he top-scored.

The aerotrim, or spinning chair, is classic taikonaut training designed to strengthen balance and spatial orientation. Lasting ten minutes is considered "excellent," but Zhang always pushed himself on for 15 minutes.

Training for spacewalks in a weightless environment, Zhang wore a suit weighing over 160 kilograms and stayed underwater for four hours at a time, losing two kilograms or more in each session.

High-G training in a centrifuge forces the body to endure pressure equaling eight times its weight. Muscles on the face become distorted, breathing is difficult and the forehead bulges. There is a red stop button inside the centrifuge, but Zhang has never pressed it. When mother of Liu Wang, one of the crew of Shenzhou-9, had a chance to watch her son's centrifuge training on a monitor, she cried and refused to watch any more.

Since Yang Liwei first flew into the great beyond, Chinese taikonauts have completed six manned spaceflights, conducted over 100 experiments and orbited the earth for a total of 68 days and nights.

In early January, to commemorate the 20th anniversary of the taikonaut corps, all 11 taikonauts who have been to space gathered in one of the training centers, raised their clenched fists, and revisited the oath of bravery and commitment they took years before. 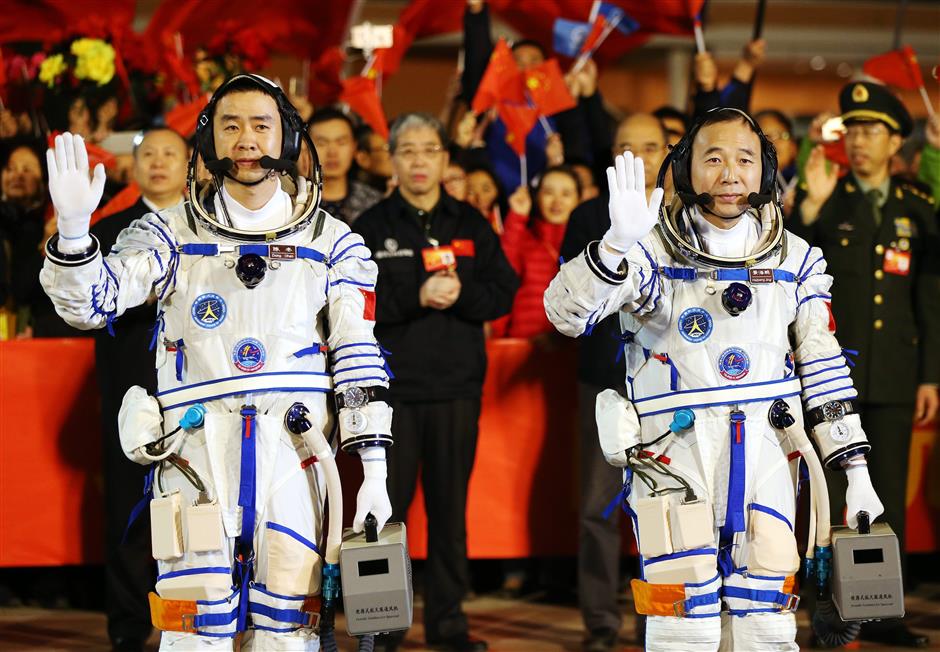 Chinese taikonauts Jin Haipeng (right) and Chen Dong wave during a farewell ceremony before embarking for the launch of the Shenzhou-11 spacecraft at the Jiuquan Satellite Launch Center in Jiuquan in Gansu Province on October 17, 2016.

In the most recent Shenzhou-11 mission in 2016, Jing Haipeng and Chen Dong stayed in the space lab Tiangong-2 for 30 days.

In the near future, when China's space station is finally in orbit, manned space missions will be a regular occurrence. Engineers and even tourists will go to space.

Zhang Xiaoguang and his colleagues have already thrown themselves into preparations for work on the space station, and his words on completing the Shenzhou-10 mission ring more true than ever.

"Our space dream knows no boundary, and our toil will never cease."