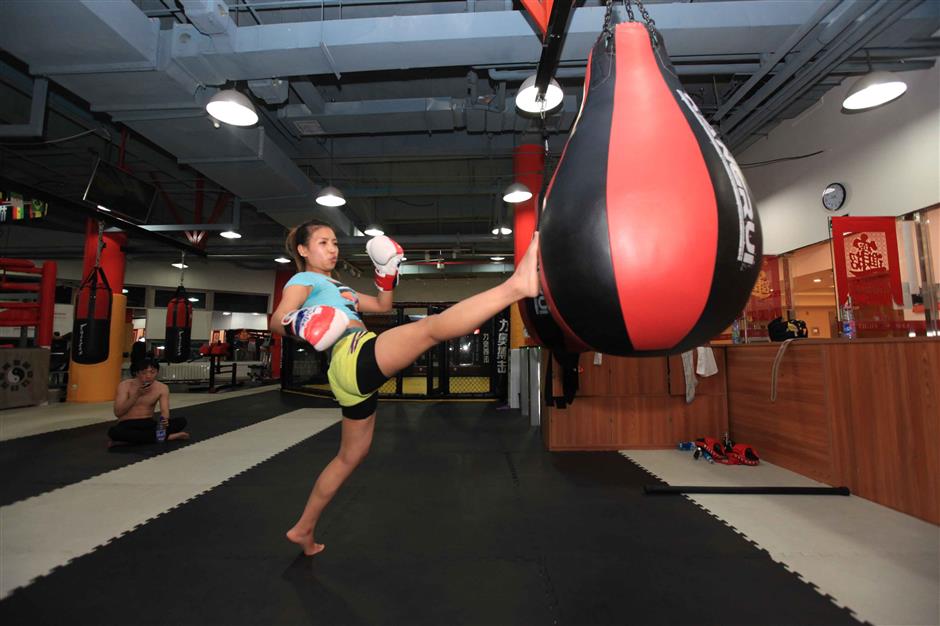 A woman surnamed Wang, who is a white collar worker, practices boxing after work in Tianjin in this file photo in 2015.

Zhang Jie, a senior executive at a state-own company, recalls being groped on Beijing's subway.

Though thin and short, she dragged her molester out of the carriage and punched the attacker twice in the face.

Zhang admitted she was also shocked by her strength and assertiveness.

She credits boxing with giving her a new sense of self-confidence.

She has joined a growing number of young Chinese women who eschew the cinemas or shopping malls in their leisure time in favor of the boxing ring.

After work, they take off their lipstick and put on tight sports bras, boxing gloves and mouth guards.

They've thrown off the traditional Chinese female stereotype of gentleness and grace.

"In my social circle, people think, 'Oh my god, aren't you afraid of being beaten black and blue?'" says Song Yun, 28, an art teacher who began boxing in 2016.

Song says poor health was her biggest motivation. She often worked late and sat in front a screen for long periods, giving her neck and shoulder pain and lumbar strain. Two years ago, a colleague's sudden death at work frightened her.

She finds most other boxers at her gym are urban elites, such as bank executives, entrepreneurs, investors and officials. They train hard, and are often bruised, but they persevere for a better physique and to satisfy the urge to disengage from work, relax and release stress.

Wang practices boxing after work in Tianjin in this file photo in 2015.

Zhang Saisai, a boxing instructor in Beijing, says most of his customers are women aged 30 to 40. "They view boxing as a way to prevent sexual harassment."

But the boxing fad also mirrors the cultural blending between China and the rest of the world. While thousands of westerners came to China learning kung fu at the Shaolin Temple every year, Chinese fitness enthusiasts are working out with yoga, Pilates, Brazilian martial arts and taekwondo.

Though still a minority sport, "boxing has entered a period of rapid growth," says Han Jiuli, vice president of the Chinese Boxing Federation.In 2017, there were 1,333 clubs nationwide and 978 amateur players participated in domestic tournaments.

But Han says the dangerous reputation of such sports will still deter most people.