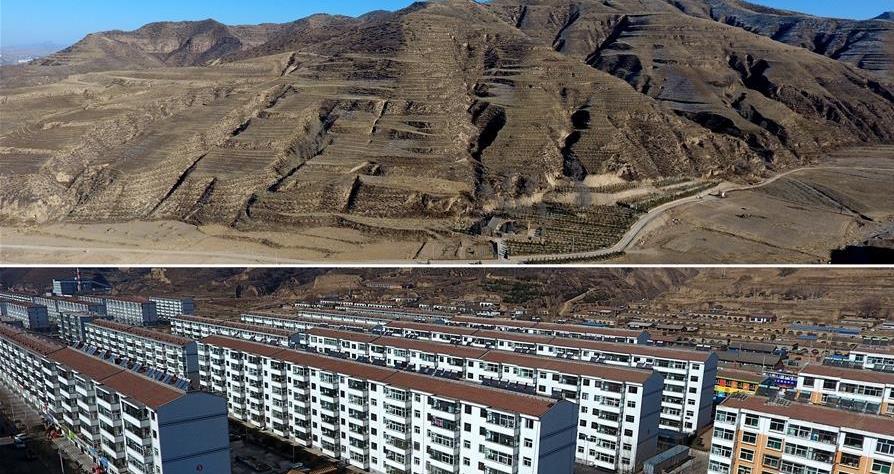 Bai Wuzi has called a cave his home for 35 years. It is where, in borrowed clothes, he married his blind wife and where their son and daughter were conceived and born.

While Chinese people bid farewell to the Year of the Rooster and welcome the Year of the Dog, Bai and his family are celebrating the last Lunar New Year in their old home, as the say goodbye to their poor, harsh lives on the mountain.

This year, they will move to an apartment in the county seat, part of China's efforts to eradicate poverty by 2020.

Dedicated to looking after his disabled wife, Bai, 48, has remained in Xiazhai where he is now the youngest male laborer. The rest of his generation either work in cities or have moved permanently out of the mountains.

"The crops have to be carried down the mountain on my back to be sold," Bai said, dust occasionally falling from the ceiling onto his head and shoulders as he speaks. He ekes out less than 2,000 yuan (US$315) a year from his mountainous tract of land and another 6,000 yuan breeding calves.

There are only three electric appliances in the house: an ancient washing machine that was his wife's dowry, a television bought seven years ago and a freezer bought by his migrant worker son.

Two large wooden cases, three water jars, an adobe bed and a mud stove make up the rest of their belongings. There is no gate or walls for the yard. Bai has never had new clothes, as all his are old ones given by relatives.

New Year celebrations used to be very tough. When the crops were hit by floods, Bai had to work in the neighboring province to make ends meet.

He rode a bike to work 100 kilometers away and did not return home for New Year to save money. The family had almost nothing to celebrate.

In Kelan, one of the poorest counties in the country, people from nearly 100 villages have moved to new homes, the remaining 17 villages, including Xiazhai, will be relocated by 2018.

Bai's family was allocated a 75-square-meter apartment worth about 150,000 yuan. The family paid less than 10,000 yuan for their new home, and will receive 14,000 yuan when their old home is demolished.

"The apartment, which I could never have afforded in my life, will be very helpful for my son in finding a wife," he says. Bai's biggest wish is to see his son married.

To celebrate the last Lunar New Year in their old home, Bai's son, 21, has purchased chicken, fish, pork, mutton, liquor, fruit and vegetables. The festival stock cost nearly as much as his father makes from a year's farming.

"I'm planning to find my true love in 2018, and hopefully give my parents a grandson," said Bai the junior.