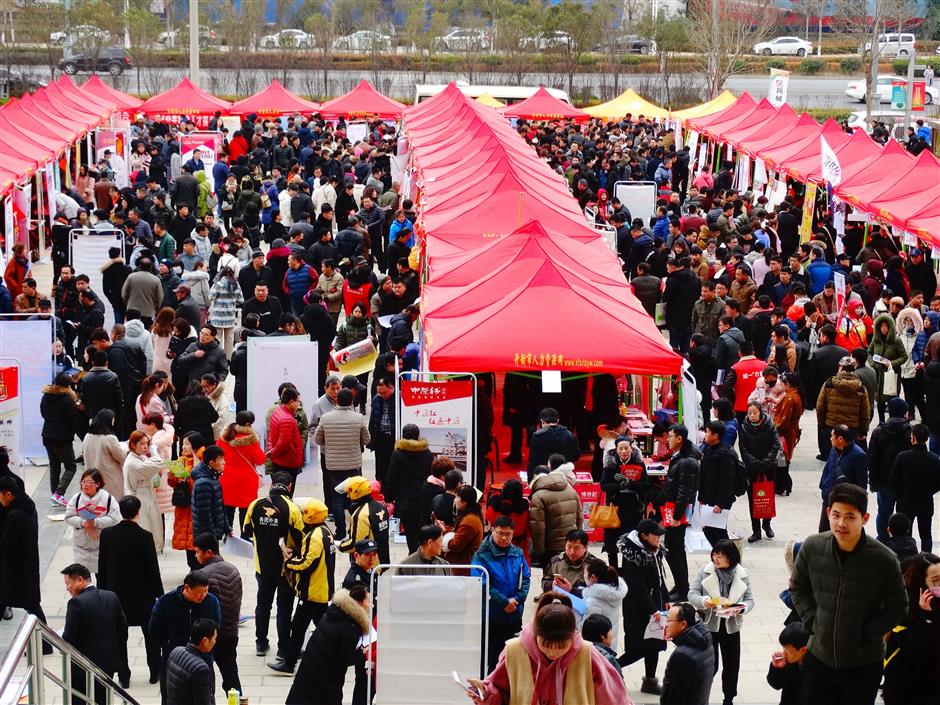 A job fair is organized in Kaifeng City, Henan Province, on March 1, 2018.

When Zheng Yuandong got off a long-distance bus in his hometown in Wannian County, east China's Jiangxi Province, for the Spring Festival holiday, a 30-meter-long recruitment ad at the station exit welcomed him home.

There used to be all kinds of commercial ads, Zheng recalled, but this time, all he saw was job descriptions and salary packages for local companies, recommended by the government.

He took out his smartphone and scanned the QR code on the ad. An employment registration form popped up, along with a list of over 3,000 jobs offered by more than 30 companies in the county, with monthly salaries ranging from 3,000 yuan (US$370) to 8,000 yuan.

To his surprise, the recruitment ads were everywhere in bus stations, on street billboards, even on the seat covers in the bus to his village.

Like other underdeveloped areas in China, many of Wannian's 430,000 residents usually leave to find jobs in coastal cities after Spring Festival and come back just once a year for the new year celebration.

Zheng, 29, worked in east China's Zhejiang Province as a quality controller and earned about 7,000 yuan a month.

"There were not many choices here 10 years ago. So I took my chance and went to big cities to make more money," he said. "But deep inside, who wouldn't want to work near home?"

Transferring the industries from neighboring Zhejiang and Jiangsu provinces has quietly fulfilled his dream. As more factories and companies opened in Wannian, the demand for talent with different skills has surged.

"We are trying our best to recruit," said deputy county head Wu Qianqian. Favorable policies have been introduced regarding house purchases, education and health care to attract talent from outside and encourage local workers to stay.

New Time Plastic Manufacturing Company, based in south China's Guangdong Province, has opened a factory in Wannian. According to its president Huang Dingben, the salary packages they offer in the county are almost the same as its headquarters in Guangdong.

In the meantime, companies in cities are also worried about recruitment. Human resources personnel at some companies in Zhejiang even took to the streets to recruit employees.

Besides the shortage of labor, a lack of skilled workers haunts some developed areas, halting production in some companies, according to Liu Xugang, chairman of Shandong Chamber of Commerce in Zhejiang.

"We are actively cooperating with universities to establish training bases in order to reserve talent in advance," Liu said.

Wu said Wannian is also doing the same to secure high-end talent. Among the 1,650 people who signed employment agreements this year, most were general laborers or service staff. Skilled jobs are still waiting to be filled.

Luo Huimin, executive president of a local agricultural company, said professional marketing personnel are most needed. The company will cooperate with higher education institutions to train and recruit talent.

The battle for talent will soon expand to universities, she said.