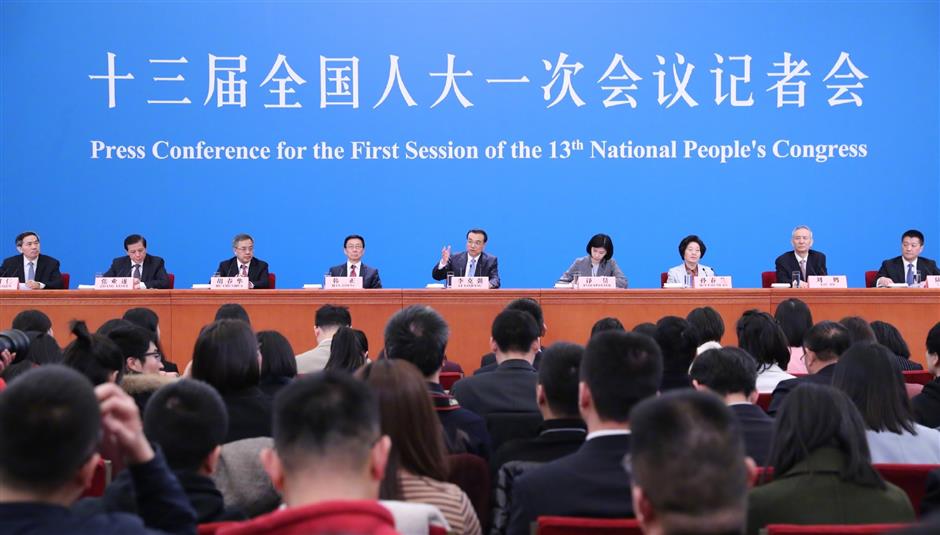 Chinese Premier Li Keqiang (C) speaks at a press conference after the conclusion of the annual legislative session on March 20, 2018.

China will open even wider to the rest of the world, Chinese Premier Li Keqiang said on Tuesday, stressing opening up is a two-way movement.

Chinese economy is so integrated into the global economy that closing the doors would only block China's own way, he said at a press conference after the conclusion of the annual legislative session.

Li said China still has much room for further opening up its market and will lower overall tariffs on imports. Tariffs on popular consumer goods, including drugs, will be slashed, while the much-needed anti-cancer drugs might phase in zero tariffs.

Despite a deficit in service trade, China will increase efforts in relaxing control over market access to the service sector, including old-age care, medical care, education and financial services, according to him.

China will gradually relax and even scrap foreign-owned equity limits in some sectors and shorten the negative list for foreign investment, Li added.

No compulsory technology transfers will be imposed on foreign investment in the general manufacturing sector and intellectual property rights will be protected, he said.

"We aim to make the vast Chinese market a fair place for both domestic and overseas firms with all kinds of ownerships to compete to offer more options for about 1.3 billion Chinese consumers, expediting upgrading of Chinese products and services," Li said.

Li said China's opening-up is a gradual process and should be perceived in a long-term and holistic view, as some seemingly minor reform steps might produce impressive dividends later, citing China's booming overseas tourism market thanks to streamlined private visa application procedures.

"Like rowing a boat, opening up is a two-way movement entailing mutual efforts," Li added.