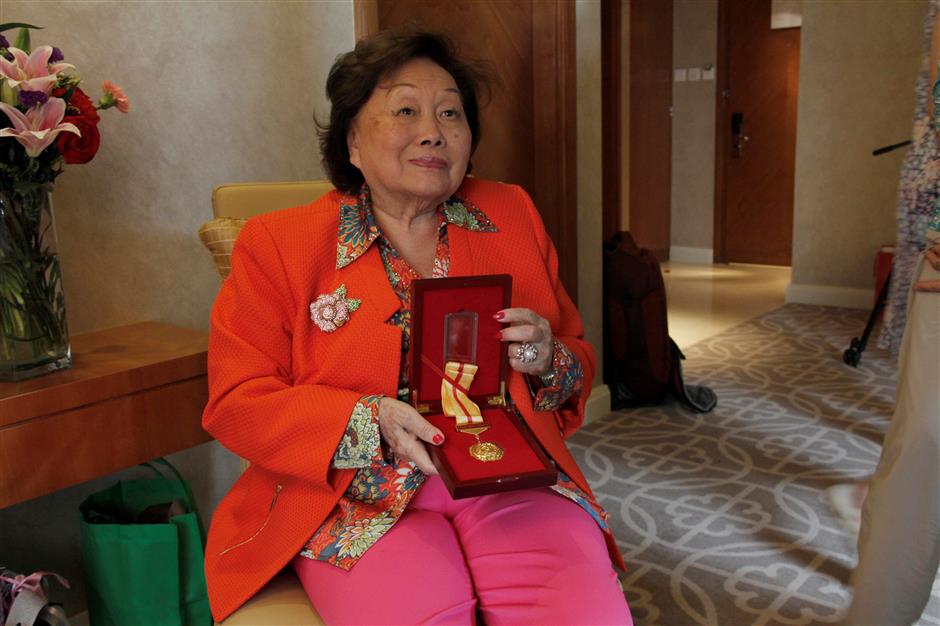 Anna Chan Chennault, widow of the late US general Claire Lee Chennault, receives a medal on behalf of her husband for fighting for China during the World War II in Beijing on September 8, 2015.

Anna Chan Chennault, widow of the late US general Claire Lee Chennault who headed the wartime Flying Tigers pilots to fight against Japanese invaders in China during World War II, has died at 94.

Anna Chan Chennault, or Chen Xiangmei, died on March 30 at her home in Washington, The Washington Post reported on Tuesday.

Chen's daughter Cynthia Chennault said her mother had complications from a recent stroke.

Born in June 1923, Chen graduated from Hong Kong's Lingnan University in 1944 and met Chennault while working as a war correspondent before marrying him in 1947. After Chennault died in 1958, Chen moved to Washington and raised her two daughters on her own.

Over the past several decades, Chen had been active in US political and diplomatic fields and dedicated to facilitating friendship and cooperation between the United States and China. She was called a "folk ambassador" between the two countries.

During the early days since the establishment of the US-China diplomatic ties and the launch of the reform and opening-up in China, Chen accompanied several US delegations on their visits to China.

Besides, she traveled to China several times, along with Flying Tigers veterans and their families.

In September 2015, Chen attended the military parade held in Beijing to celebrate the 70th anniversary of victory in the Chinese People's War of Resistance against Japanese Aggression and the World Anti-Fascist War.