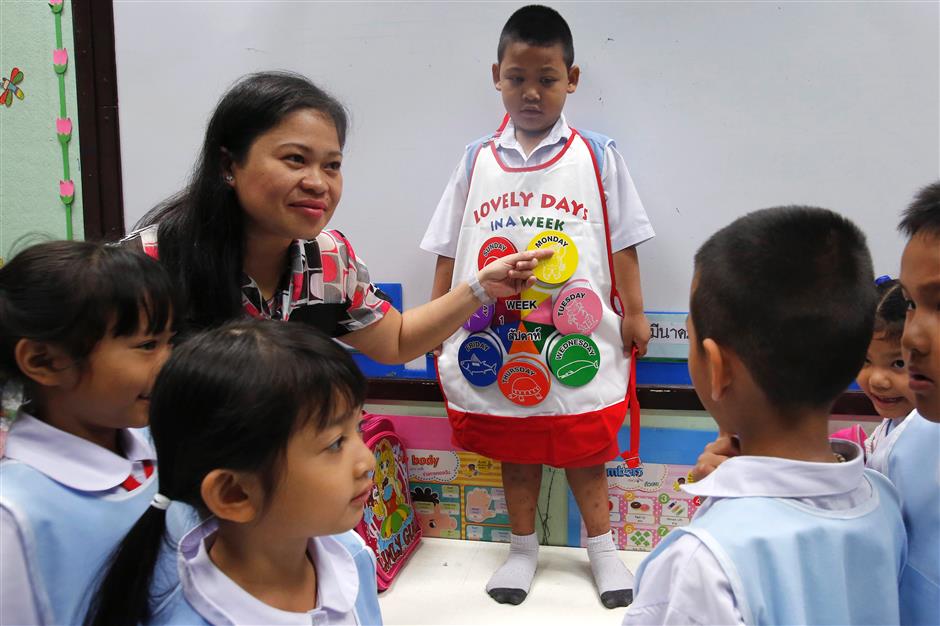 Anna Dellova from the Philippines teaches English in a school in Bangkok, Thailand, on March 2, 2015.

Filipino English language teachers Cresencia Mapalad and others are hopeful that they could land teaching jobs in China.

Mapalad told Xinhua in an interview that she got excited when President Rodrigo Duterte announced that China has opened its doors to Filipino English language teachers.

"I am excited to apply. I hope that there will be no age restrictions to applicants because I'm very interested in applying," said the 72-year-old English language teacher who is now sitting as the dean of the College of Education in Metro Manila College in Quezon City.

Mapalad, who has a doctorate degree in education, has taught English in Samar State University in the central Philippines for decades. When she retired in 2011 at the age of 65, she applied at MCM.

For Mapalad, landing a teaching job in China means better pay and better life. In China, she said, her pay will definitely higher than what she is getting now. "Maybe three or four times my current salary."

Mapalad is paid 20,000 pesos (US$346) a month. Teachers fresh from college are paid 12,500 pesos. Teachers in public school get a little bit more than their counterparts in private schools, she said.

She said Filipino English language teachers have greater advantage than teachers from other Asian countries.

She said the Philippines is recognized around the world as one of the largest English-Speaking nations, with the majority of its population having at least some degree of fluency in the language.

"We are even better that the Americans because we strictly follow grammar."

Teofanes Pie, an English language professor at MCM, agrees with Mapalad. He said English has always been one of the country's official languages, and is widely spoken by millions of Filipinos.

"English is the primary medium of instruction in education in the Philippines, and is the language of commerce and law," Pie, 61, said in a separate interview. His current monthly salary is 13,000 pesos.

Pie has a bachelor's degree and a master's degree in education. With his degrees, Pie expressed optimism that he will get more if he is hired as an English language teacher in China. "Maybe I'll get 100,000 pesos monthly salary."

Pie, who worked in the Middle East before finishing his college and post-graduate studies in the Philippines, said Chinese students will also like Filipino teachers more "because we are happy people."

"This is a good opportunity for Filipinos who wish to work abroad. Chinese people are eager to master the English language."

"We have an edge because of our proficiency in the English language. Also we have perseverance in good work, and we are known around the world as people who have initiative," Pie said.

Moreover, Pie said Filipinos are easier to understand when they speak the English language. "Unlike other Asian speakers, our English is not heavily accented," he said.

Both Mapalad and Pie said Filipinos have comparative advantage since American English is the language of instruction at virtually all Philippine institutions of higher learning. That is why Filipinos speak fluent English, they said.

Duterte is pleased that China is further opening its doors to Filipino English language teachers.

Upon his arrival from his participation in the Boao Forum for Asia in Hainan early this month, Duterte reported that nine business agreements have been signed during his third visit to China.

"These are projected to generate more than 10,000 jobs for our countrymen and women. Among these is the Memorandum of Understanding on the employment of Filipino teachers of English language in China," Duterte said.

"This allows for the employment of 2,000 Filipino English language teachers starting this year and will be valid for two years, subject to renewal."

The document called the MOU on the Employment of Filipino Teachers of English Language in China was signed by Philippine Labor Secretary Silvestre Bello III and Chinese Ambassador to the Philippines Zhao Jianhua.

"We both underscored the need for further intensified cooperation, trade and investments, tourism, agriculture, defense, science and technology and energy, among other things," Duterte said.

Duterte said his latest visit to China "underscores yet again the need for the Philippines to seek its destiny in Asia."

Philippine Ambassador to China Chito Sta. Romana broke the news to reporters in Hainan about China's plan to hire more English language teachers from the Philippines.

Sta. Romana said there are Filipino teachers currently working in China but they found the jobs on their own.

"There used to be a Chinese rule that excluded the Philippines as a legal source or as a source that they encouraged. They wanted to emphasize, you know, what they called native speakers but they have relaxed it now," Sta. Romana said.

Sta. Romana said the improved ties between the Philippines and China also played a role in the readiness of Beijing to hire more Filipino teachers.

Already, Duterte has instructed Bello to start the implementation of guidelines for the hiring of Filipino English teachers and for his part, Bello said, the bilateral agreement with China might be renewed after two years and outlines the salaries, work hours, benefits and other employment rules for Filipino workers.