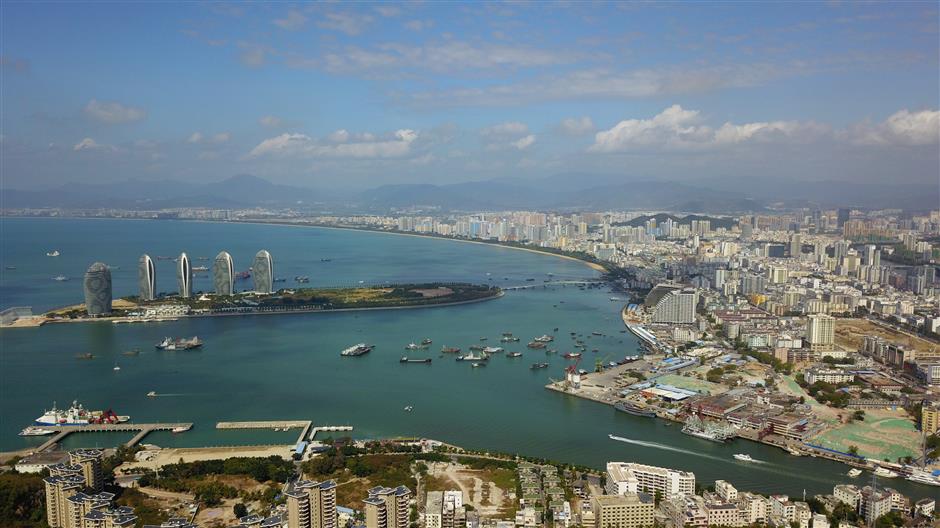 The bird's-eye view of the International Asia Pacific Convention Center in Sanya, Hainan Province, on January 25, 2018.

The Cirque du Soleil show "TORUK - The First Flight" has been a hit in Sanya City, a popular Chinese destination for beach lovers.

"I'm absolutely satisfied with the ticket box here in Sanya. The local reaction has most likely never been seen in other parts of the world," said Michael Veilleux, a company manager with the show from the Canadian entertainment company.

The show, inspired by the blockbuster Avatar, has been staged in Sanya, in the island province of Hainan, since the beginning of the Chinese Lunar New Year in February and will run through the end of April.

Janie Mallet, a publicist for the show, noticed a great number of Russian tourists in Sanya. "Cirque du Soleil is very famous in Russia. Our presence here adds to the experience of them coming to Hainan," she said.

Once remote and underdeveloped, Hainan has been edging closer to its goal of becoming an international tourist resort by 2020 and has become increasingly attractive to investors at home and abroad.

"It is more widely known abroad nowadays. Its infrastructure and tourist facilities, such as transportation and hotels, have been improved," said Qian Jiannong, senior vice president of Fosun International, the second-largest shareholder of Cirque du Soleil.

By the end of January, the shop in Sanya, which opened in 2014, and another in Haikou that opened in 2011 had recorded total sales of about 31.5 billion yuan (US$5 billion).

China's first international cruise port is under construction in Sanya. Upon its completion, Sanya will be able to accommodate the world's largest cruise ships and receive 2 million tourists a year.

Last year, Hainan received 67.45 million tourists, up 12 percent year on year, and nearly 81.2 billion yuan in tourism revenue, up 20.8 percent from 2016. The number of overseas tourists to Hainan exceeded one million for the first time in 2017.

A development guideline unveiled by central authorities last week said the country's only tropical island aims to be an international tourism consumption center, with a slew of opening-up policies expected to follow.

The State Immigration Administration announced Wednesday that greater visa-free access will be offered for tourists from 59 countries to Hainan from May 1, allowing group and individual tourists to stay there for up to 30 days on condition that they book their tour through travel agencies. Hainan offers 15-day visa-free stays for group tourists from 26 countries.

The opening-up policies will help boost consumption and reduce the island's long-term reliance on the real estate industry, according to Fu Xuanchao, director of the provincial development and reform commission.

The Chinese government is a staunch supporter of Hainan's tourism development and Hainan is one of the safest choices among global island resorts, according to Qian Jiannong.

Qian suggested that Hainan focus on its distinctive features.

"All islands boast beaches and sea. How do we stand out? Highlight the local culture, food and architecture," he said.

In addition, Qian said a major factor holding back foreign tourists from visiting Hainan is expensive air ticket prices. He suggested more flights and airlines be introduced to lower the prices.

He also mentioned a lack of qualified tourism professionals and schools in Hainan. "Our Atlantis resort that opened in Sanya in February needs 4,000 staff. But now we have only 3,000," said Qian.