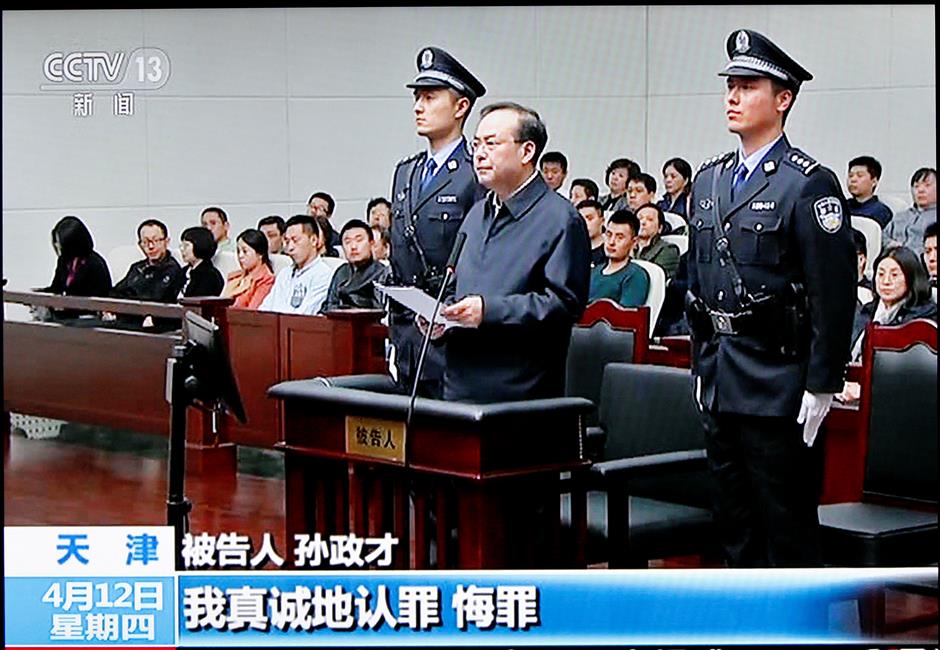 In this TV grab taken from CCTV on April 12, 2018, Sun Zhengcai, former Secretary of the Chongqing Municipal Committee of the Communist Party of China, stands trial for bribery at the Tianjin No. 1 Intermediate People's Court in Tianjin, China.

Sun Zhengcai, former secretary of the Chongqing Municipal Committee of the Communist Party of China, has been sentenced to life in prison for taking bribes of over 170 million yuan (US$26.7 million).

The sentence was announced on Tuesday by the First Intermediate People's Court of Tianjin Municipality.

He was deprived of his political rights for life, and all his personal property was confiscated.

His illegal gains and relevant yields they generated will be retrieved, the court said.

Sun is also a former member of the Political Bureau of the 18th CPC Central Committee.

The court found that between 2002 and 2017, Sun had taken advantage of various posts to provide help for certain units and individuals in project bidding, project approval, enterprise operation and personnel promotion and arrangement, and accepted money and property worth over 170 million yuan, either by himself or with "certain affiliated persons."

The court said that Sun, as a senior official, should have set an example in observing the law. However, by accepting "extremely huge amounts of bribes," Sun had seriously undermined the work of state organs, violated integrity rules for state officials and tarnished the reputation of state officials.

However, it also noted that most of the bribes involved were "taken directly by certain affiliated persons," and that Sun had confessed to his wrongdoings, showed repentance and been cooperative in returning illegal gains. All the illegal gains involved have been retrieved.

The court said the sentence was handed down with consideration of the above-mentioned facts.

Sun at Tuesday's public sentencing proceeding pleaded guilty and expressed "sincere repentance." He said he accepted the sentence and would not appeal.

He also said he would earnestly reform himself.

An open trial of Sun's case was held at the court on April 12, and information about the trial proceedings were broadcast by the court's Weibo account.