China chili fest gets off to scorching start 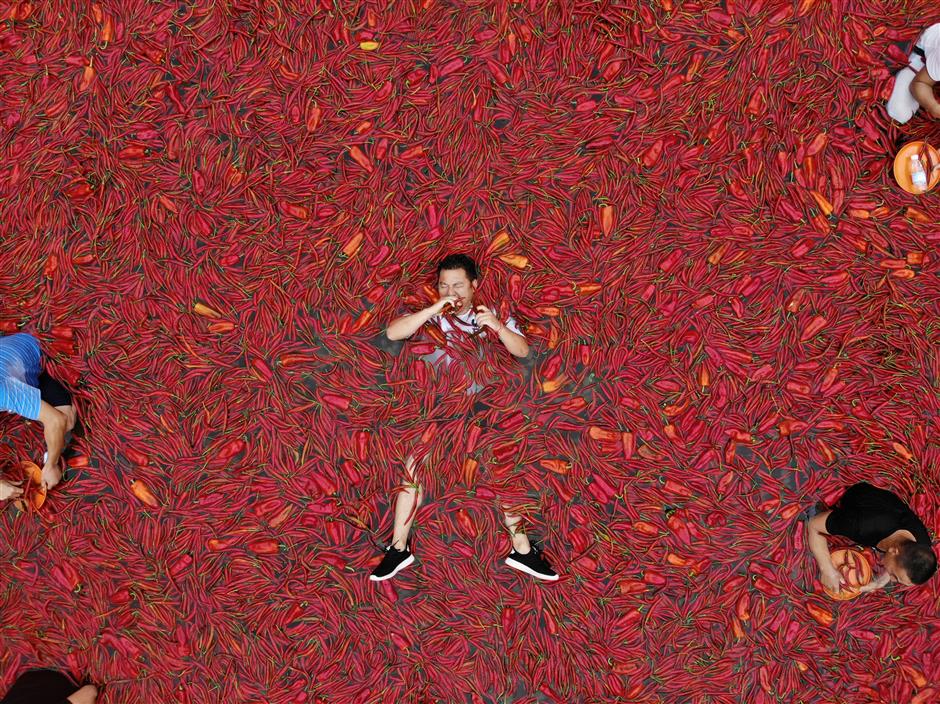 A participant lies in a shallow pool filled with water and 3 tonnes of floating chilis as he takes part in chili-eating contest  in Ningxiang city, central China's Hunan province, 8 July 2018.

An annual chili pepper festival kicked off Monday in central China's spice-loving Hunan province with a chili-eating contest in which the winner set a blistering pace by downing a gut-busting 50 peppers in just over a minute.

Local boy Tang Shuaihui took home a 3-gram 24-karat gold coin for winning the competition, which is put on by a local theme park in the county of Ningxiang and now in its second year.

With doctors on hand just in case, 10 contestants each held plates heaped with 50 Tabasco chili peppers, racing to be the first to finish off the red-hot fruits.

Tang cleared his plate in just 68 seconds in a contest held in nearly sweltering temperatures weather and as competitors sat in a shallow pool filled with water and 3 tonnes of floating chilis.

"He finished them at an amazing speed, barely after the emcee had finished speaking," said Sun Minying, an employee at the theme park, called the Tanhe Ancient City.

The Tabasco pepper has a rank of 30,000-50,000 on the Scoville Heat Scale that measures the piquancy of chilis, which puts it somewhere between a jalapeno and a habanero.

The peppers bobbing in the pool, however, were of a far weaker variety, partly to avoid irritating the contestants' skin.

Hunan cuisine is marked by its fiery peppers and richly coloured dishes and is considered among China's eight great food traditions along with Sichuan, Cantonese and other cuisines.

The festival lasts until the end of August, with a fresh chili-eating contest held daily.