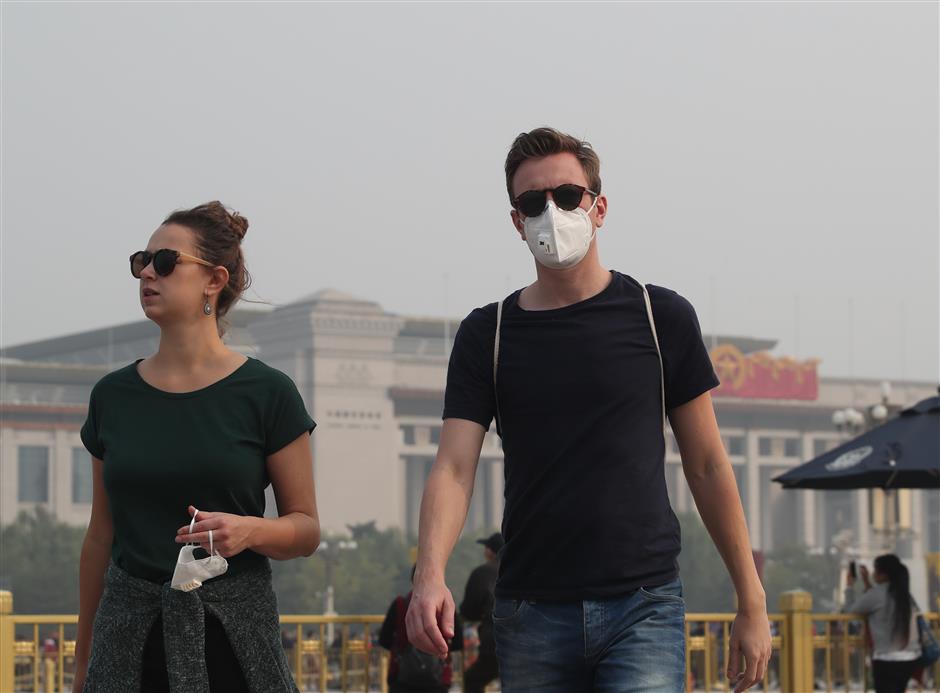 A foreign tourist wearing a face mask against air pollution visits the Tian'anmen Square in heavy smog in Beijing, China, on October 14，2018.

American and Chinese researchers proposed to bring a new pollutant under control in order to reduce extreme air pollution in China.

The study published on Thursday in the journal Geophysical Research Letters showed that a key to reducing regular wintertime air pollution in the country was to reduce the formaldehyde emissions.

During days in Beijing with especially high particulate air pollution or PM 2.5, the sulfur compounds significantly increased, which tend to be interpreted as sulfate, so China typically focused on reducing sulfur dioxide.

Although the sulfur dioxide over eastern China has decreased substantially since 2005, particulate air pollution hasn't been rooted out.

The researchers found that the instruments used to analyze haze particles might misinterpret sulfur compounds as sulfate when they are molecules called hydroxymethane sulfonate (HMS).

HMS is formed by the reaction of sulfur dioxide with formaldehyde in clouds or fog droplets. Formaldehyde is a strong-smelling gas, used especially to preserve parts of animals or plants for biological study.

The researchers demonstrated that HMS molecules might constitute a large portion of the sulfur compounds observed in PM2.5 in winter haze. It would help explain the persistence of extreme air pollution events despite the reduction of sulfur dioxide or SO2, according to them.

The primary sources of formaldehyde emissions in eastern China are vehicles and major industrial facilities such as chemical and oil refineries, according to the study.

"Our work suggests a key role for this overlooked chemical pathway during episodes of extreme pollution in Beijing," said Loretta J. Mickley, senior research fellow in SEAS under Harvard.

The study was a collaborative effort with Harvard University, Tsinghua University, and the Harbin Institute of Technology.