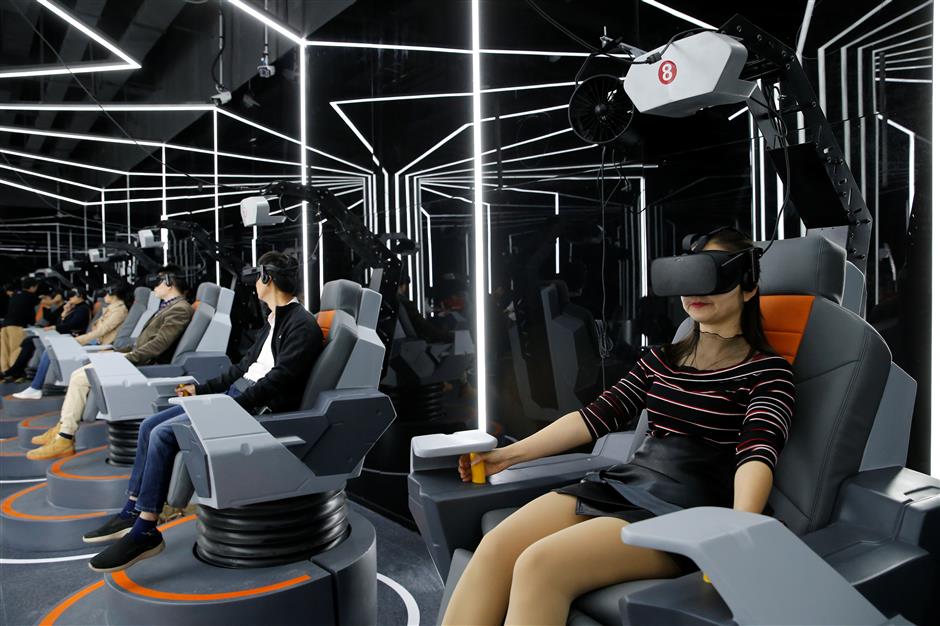 Visitors try the virtual reality devices at the 2018 World Conference on VR Industry in Nanchang, Jiangxi.

What will replace smartphones in becoming our most indispensable gadget in daily and digital life?

It may be a futuristic and ambitious answer that a pair of virtual reality glasses could allow us to make calls and surf the digital realm by just moving our eyeballs, but in China, this idea has been met with unprecedented enthusiasm.

On Saturday, tens of thousands of residents in Nanchang, capital of east China's Jiangxi Province, flocked to the city's exhibition center where a VR expo was being held as part of the ongoing 2018 World Conference on VR Industry.

Visitors formed long lines outside demonstration booths just to have a quick go at the new technology that projects them into a simulated 3D environment where they can fly, fight monsters or gaze at the Milky Way.

"People are willing to queue for two hours for a five-minute try," said Xu Chao, a sales trainer with HTC, a Taiwan-based tech firm that is displaying its VR helmet Vive at the event. "There are parents with children, but most visitors are young people."

At a forum also held in Nanchang, experts and industry representatives were optimistic about the technology's ascendance in the world, especially in China, a huge digital market that is promoting innovation and economic upgrading.

"China's role [in VR development] has been on the rise -- 95 percent of the world's VR equipment is produced in China, and many VR content in app stores now comes from Chinese developers," said Alvin Graylin, president of HTC China.

"China has a huge market, and the Chinese people are passionate about new technologies," he told Xinhua. "China has the largest number of viewers of Ready Player One [a film set in a future VR game] in the world."

And it is not just the Chinese public who are interested. The central government has promised to support the development of VR technologies that have become a fast-growing market in China. At the local level, many cities and provinces have as such issued policies to nurture VR expertise and industry.

Jiangxi, traditionally not on par with manufacturing and innovation powerhouses in the coastal region, launched a VR industrial base in 2016 to brew what it sees as a coming technological revolution. Its hosting of the VR conference is expected to guide new waves of investment into the province known for its well-developed electronic information industry.

VR technologies simulate a virtual environment that resembles reality. Wearing equipment such as helmets and glasses, users feel as if they have been placed in a new environment, such as a picturesque island or a room they can furnish.

Its technological brother augmented reality (AR) projects virtual items into the images of the real world, while mixed reality (MR) presents a world where real and virtual objects co-exist. VR, AR and MR can be widely applied in education, training, entertainment, tourism and online shopping.

However, although VR and AR technologies are already serving business customers, such as designers and manufacturers, experts say it could be another few years before the creation of small, light VR glasses that combine VR, AR and communication functions occurs.

Many technical bottlenecks need to be overcome, including the search of a much more powerful graphics processor and faster mobile internet. Emerging markets like China have also been advised to nurture a VR "ecosystem" with more content providers.

"The biggest question [for the VR industry] is to create more consumer content that consumers can use every day," said Hugo Swart, who heads the VR/AR business of U.S. chip giant Qualcomm, which earlier this year announced its first chip dedicated to XR (VR+AR+MR). Swart added that he hopes such content would mean greater use of VR and AR.

Some breakthroughs may be around the corner. Several Chinese cities are already piloting the faster 5G wireless network, which is vital to mobile VR. On Saturday, Microsoft signed an MoU to locate its first VR/MR incubator in Jiangxi, saying it is ready to work with Chinese partners to build up the VR ecosystem.