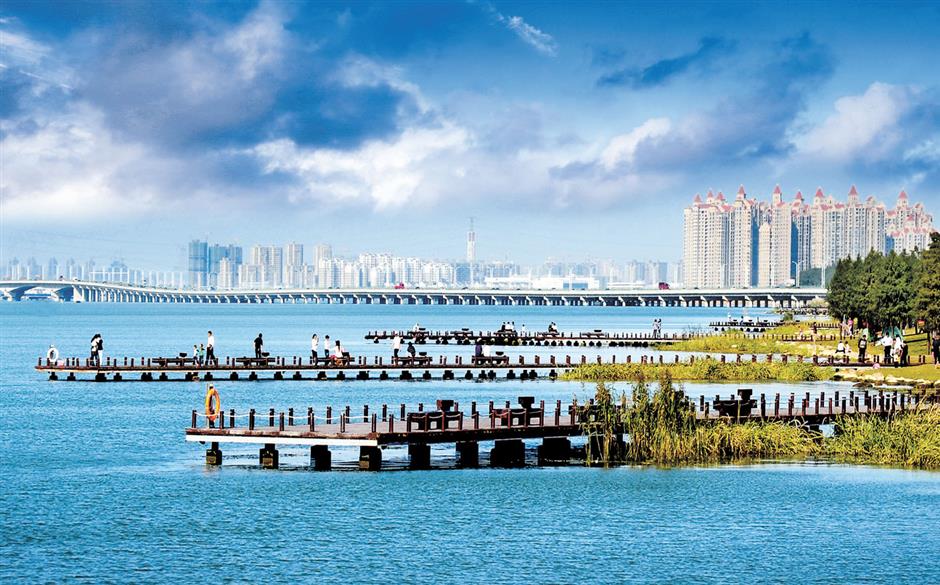 Built at the beginning of 2012 in Suzhou, Jiangsu Province, Wujiang Taihu New City aims to become a most eco-charming tourism resort, as well as the priority-listed lakeside leisure base in the area around Taihu Lake.

Chinese cities need appropriate administration systems and governance models to support the implementation of low carbon eco-city projects, and to effectively scale up this urban development model across the nation.

Wujiang Taihu New City is one of the most successful models of Chinese low carbon eco-cities.

The government has announced that Wujiang be designated as Taihu New City. Wujiang District, formerly Wujiang City, is one of five urban districts in Suzhou.

At the same time, Wujiang currently ranks as one of the most economically successful areas in China.

A portion of Taihu Lake is situated in Wujiang District. Numerous historical canals are located in Wujiang, and historic Songling Village is also in Wujiang.

To Taihu New City, the Suzhou Bay of Taihu Lake with its picturesque scenery, is definitely the most precious gift from nature.

Previously seen as the “Victoria Harbor” of Suzhou, Suzhou Bay covers a total area of more than 180 square kilometers, including the water and land areas, with a population of 330,000.

The completed comprehensive remedy project of East Taihu Lake has also returned 200,000 mu (13,333 hectare) of water area to Taihu Lake, giving back the magnificent sight of a vast stretch of blue water on East Taihu Lake.

Taihu New City, built along the lakeside, is born with the water, based on the greenland, with more than 60 percent coverage rate of green area, which makes the city the “most ecological” land in Suzhou.

The modern service industry and the innovation industry both play leading roles in the economic development of Wujiang Taihu New City, which is currently a thriving metropolitan center, an energetic lakeside bay, the birthplace of new Suzhou culture and an advanced new low-carbon eco-city.

With the backbone of the modern service industry, Taihu New City has definitely grown to be a “wisdom” new eco-city which is supported by its headquarters economy, cultural creation, ecological leisure and tourism.