At a lecture in Shanghai, Yu, who is also known as Michael Yu, said: “If a woman’s standards for finding a man are based on the man’s income instead of his conscience, then all Chinese men will opt to pursue not a good conscience, but a good income. This is how modern Chinese women select men.” Yu added that because of this trend, women are contributing to the country’s “degradation.”

In his apology letter to the federation, Yu said he was deeply rattled and remorseful from all the criticism and realized his comments were wrong.

“In fact, most (Chinese) women are working diligently and conscientiously and contributing to the happiness of families and development of the country,” Yu wrote. He promised to learn more about the theories on gender equality and create an enterprise culture that men and women are equal in New Oriental.

China Women’s News, mouthpiece of All-China Women’s Federation, accepted his apology yesterday with the proverb: “A fault confessed is half redressed.”

Earlier, Jiang Xiuhua, deputy head of the Women’s Studies Institute of China, said Yu’s remarks had harmed the image of the country as well as of all Chinese women and men who have a sense of gender equality.

Shen Yifei, an associate professor at Fudan University’s School of Social Development and Public Policy said Yu’s first “apology” on his Weibo, which linked women’s strength with the country’s strength is a kind of “reverse discrimination.”

Shen said everybody in the country should be responsible for its rise, and each one growing strong can only make the country strong. She called on men and women to learn about gender equality and stop talking about the cliches and stereotyping any gender.

New Oriental Education and Technology Group is the first Chinese educational institution to be listed in New York. Yu has been known as the “Godfather of English Training.” 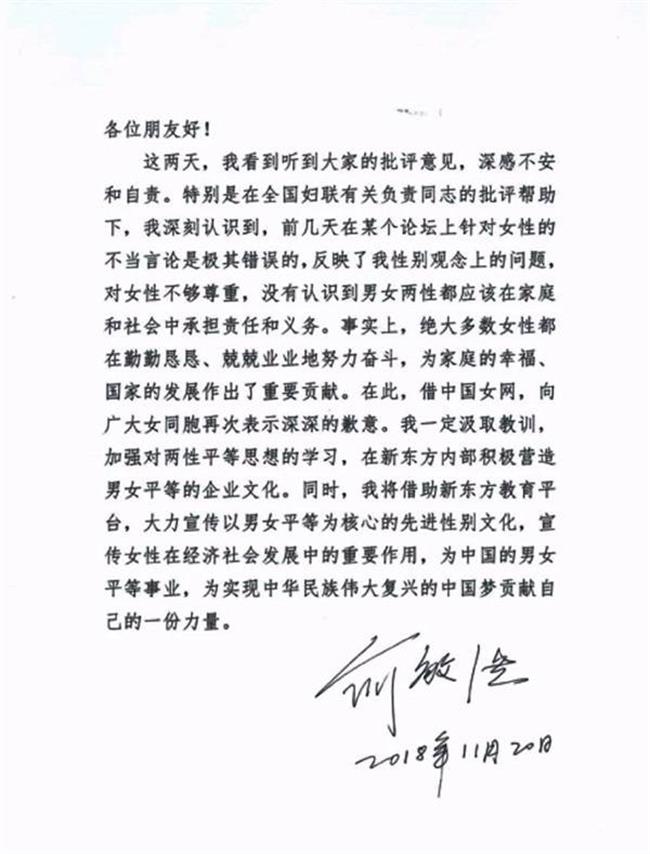