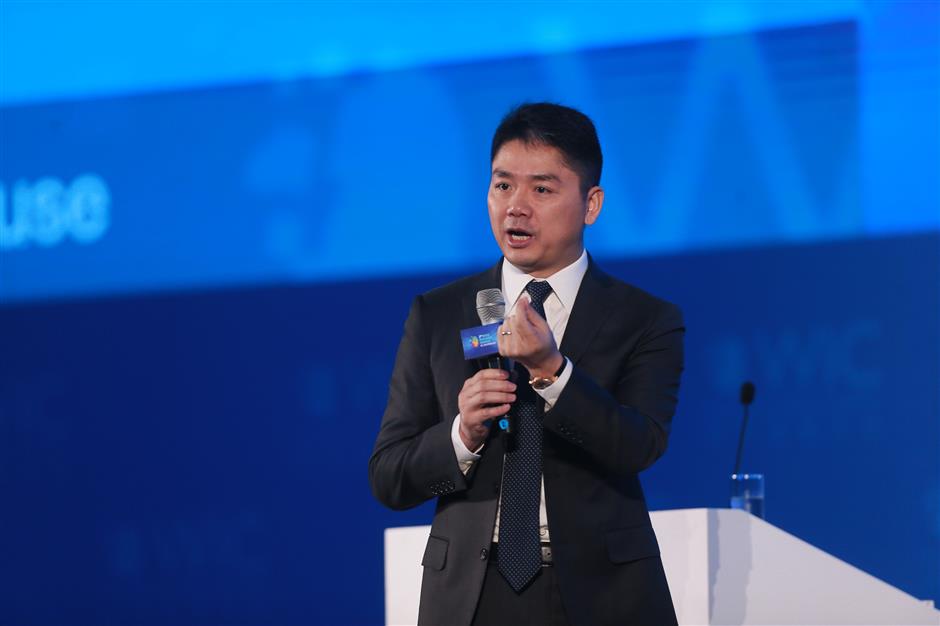 Richard Liu Qiangdong, chairman and CEO of online retailer JD.com, speaks at the main forum during the second World Intelligence Congress, also known as WIC2018, in Tianjin, China, on May 16, 2018.

A University of Minnesota student who said she was raped last August by Richard Liu, the chief executive officer of China's e-commerce retailer JD.com Inc, filed a civil lawsuit against him in a Minneapolis court on Tuesday, nearly four months after prosecutors declined to press criminal charges.

Liu, through his lawyers, maintained his innocence throughout the law enforcement investigation, which ended in December.

The lawsuit filed in Hennepin County court seeks undisclosed damages and names Richard Liu and JD.com as defendants. It also identifies the student for the first time as Liu Jingyao, a Chinese woman who is not related to the JD.com executive.

"Defendant Liu was physically larger in size and significantly stronger than the plaintiff and used his superior size and strength to subdue and rape her," the court document said.

Richard Liu's attorney, Jill Brisbois, said in a written statement on Tuesday that she had not yet reviewed the complaint, but "based on the Hennepin County attorney’s declination to charge a case against our client and our belief in his innocence, we feel strongly that this suit is without merit and will vigorously defend against it."

Peter Walsh, an attorney for JD.com at Hogan Lovells, said in a written statement while they were not prepared to comment at this time, they will vigorously defend against "these meritless claims against the company."

The student first accused Richard Liu of rape in August when he was visiting the University of Minnesota to attend a doctor of business administration program directed at executives from China.

Liu, 46, who started JD.com as a humble electronics stall and expanded it into an e-commerce company with 2018 net revenues of US$67 billion, was arrested on August 31, but released without charge about 17 hours later.

He soon returned to China and continued his executive role, as prosecutors in Minnesota investigated the rape allegation to determine if criminal charges were warranted.

In December, Hennepin County Attorney Michael Freeman announced he was not charging Richard Liu as there were "profound evidentiary problems which would have made it highly unlikely that any criminal charge could be proven beyond a reasonable doubt."

Richard Liu said subsequently on Chinese social media that while he had broken no law, he felt "utter self-admonishment and regret" for the "enormous pain" his "actions on that day" caused his family, especially his wife, Internet celebrity Zhang Zetian.

Also known as Liu Qiangdong, he would have faced up to 30 years in prison under Minnesota law if convicted of first-degree criminal sexual misconduct.

Reuters previously reported details of what happened while Richard Liu was in Minneapolis for a week-long residency program at the University of Minnesota's Carlson School of Management, including a description of the alleged attack and the events around it given by the then-anonymous student.

"We are proud of the incredible courage our client has shown revealing her name for all the world to see, so that justice may be done," Florin Roebig, P.A., one of the law firms representing Liu Jingyao, said in a statement on Tuesday.

Florin Roebig declined to comment on the amount they were seeking in damages, but the court filing showed it was more than the US$50,000 threshold required.

Spokesmen for the University of Minnesota and the Hennepin County Attorney declined to comment on the lawsuit.

The lawsuit accused Richard Liu and JD.com of a total of six counts of false imprisonment, civil assault and battery, as well as sexual assault or battery.

JD.com is "vicariously liable" for Richard Liu's behavior because his alleged actions happened while he was "seemingly" at work-related activities, the court document said. The assault and battery also began in the presence of two other JD.com employees, Vivian Yang Han and Alice Zhang Yujia, the court filing said.

Yang, when reached on her cellphone for comment, hung up. Zhang did not respond to a request for comment.

"Those employees were not only present but helped facilitate" Richard Liu's alleged assault of the student, according to the lawsuit.

"The offensive contact caused the plaintiff physical and emotional injuries," the court filing said. "It also caused her to withdraw from all classes during the fall 2018 semester at the University of Minnesota and to seek professional counseling, care and treatment."

The lawsuit said that when police visited the student's apartment after being alerted to the rape allegation, Richard Liu tried to intimidate her from cooperating with law enforcement, according to an officer's body camera footage. The lawsuit said Liu was "staring down" at her while being removed from her apartment, angrily saying "What the hell?"