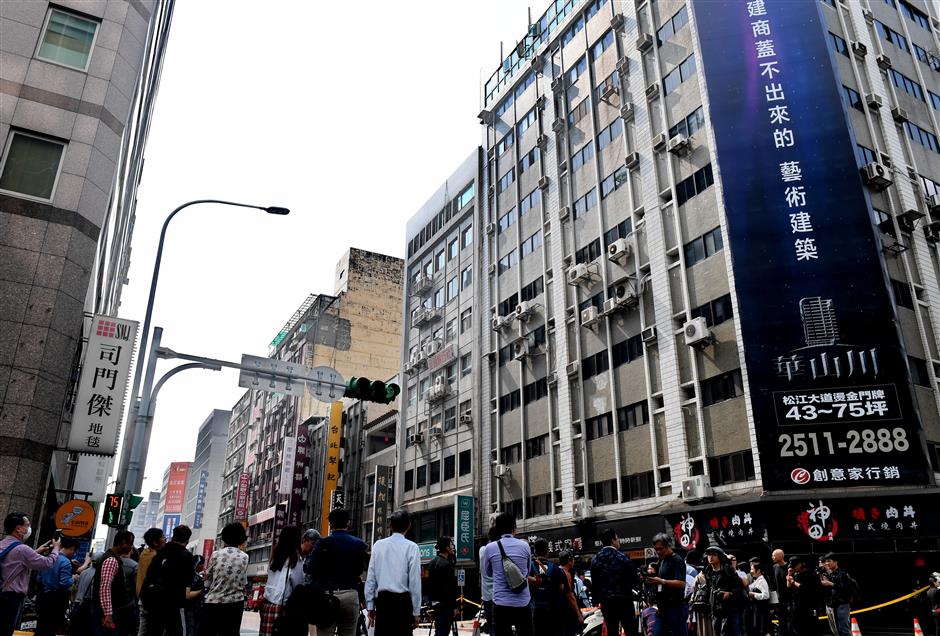 People stand in a Taipei street after a 6.7-magnitude earthquake jolted Hualien County in eastern Taiwan yesterday at 1:01pm.

A 6.7-magnitude earthquake rattled Hualien county in eastern Taiwan at 1:01pm Thursday, injuring at least 17 people, tilting two buildings in Taipei, and spooking many others across the island.

The 17 people were injured either by falling objects or shards of glass, including a 40-year-old Malaysian tourist who was severely injured by falling rocks when trekking in Taroko park in Hualien, according to Taiwan's emergency operation center.

A woman, a 54-year-old Taiwan resident who was also on the hiking trail, was hospitalized with a head injury, according to the center.

The other injured people were reported in Taipei and New Taipei cities.

The temblor, the strongest that rocked Taiwan so far this year, lasted for one minute in Hualien and other areas.

Lamps at home were shaking sharply inside buildings in Taipei and many people were dining and screaming when the earthquake occurred. Some scared residents ran out of buildings to dodge the quake.

Wines and other items inside stores, or even rocks and ceilings, were widely reported to fall across Taiwan.

The quake caused landslide near the epicenter in Sioulin township in Hualien.

"It was the strongest earthquake I've felt in Taipei since the Sept. 21 earthquake," a Taipei resident surnamed Kao said, referring to the earthquake that shook Nantou county in 1999 and killed more than 2,400 people and injured thousands of others.

All elevators of the Taipei 101, the island's tallest building, were once suspended after the earthquake.

Two buildings in Taipei, one on Chang'an East Road and the other in Xinyi District, tilted after the quake, forcing the evacuation of more than 100 people from inside.

The operation of all lines on the Mass Rapid Transit system in Taipei, as well as the line linking Taipei with Taoyuan International Airport, were suspended for safety concerns, and service was resumed as of 2:30 p.m. after safety checks.

In New Taipei city, seven cases of people stranded inside elevators were reported and they were rescued later.

The powerful earthquake also forced the high-speed railway service to partially suspend and operation was later resumed in the afternoon.

A section of Provincial Highway No. 8, between Kuanyuan and Taroko Gorge in Hualien, has been closed until Friday at the earliest due to the risk of falling rocks, according to the center.

The epicenter was monitored at 24.13 degrees north latitude and 121.52 degrees east longitude, at a depth of 24 km, according to the China Earthquake Networks Center.

According to the island's seismic agency, data of the past 10 years showed that an average of three earthquakes measuring above 6 degrees on the Richter scale hit Taiwan each year.