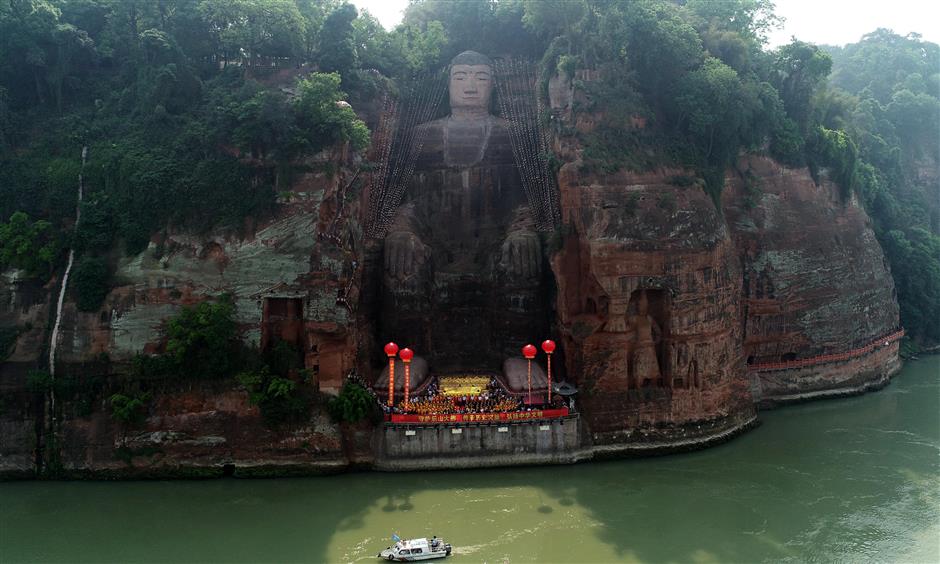 The Leshan Giant Buddha overlooks three rivers and was carved in the Tang Dynasty.

The giant Buddha in southwest China’s Sichuan Province has reopened to tourists after a six-month examination as part of research into a repair plan.

The statue, at 71 meters high and believed to be the world’s largest Buddha, sits outside the city of Leshan. It has cracks and damage on its chest and abdomen, according to the management committee of the Leshan Buddha scenic area.

During the lengthy examination, which lasted from October 8 to the end of March, the main body of the renowned statue was completely or partially covered.

The examination involved the use of cutting-edge technology such as a drone aerial survey, 3D laser scanning and high-density resistivity methods.

Before the restoration, hundreds of plants, including lichens and moss, grew on the surface of the Buddha. The cleared plants were made into unique tourist commodities — “lucky plants of Buddha.”

The Buddha statue, carved into a cliff in Leshan Mountain and overlooking three converging rivers, was built over a 90-year period starting in the year 713, during the Tang Dynasty (AD 618-907).

In 2001, a project was conducted to clean the body, cement rock structures, and install drainage pipes, which cost 250 million yuan.

In 2007, the Buddha received another facelift to repair damage caused by weathering and acid rain.